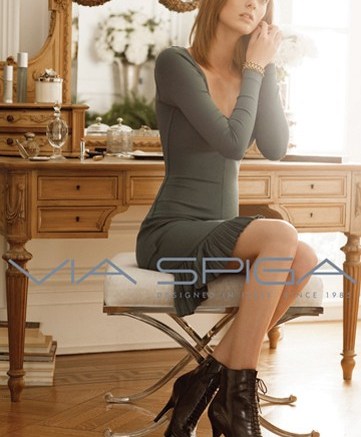 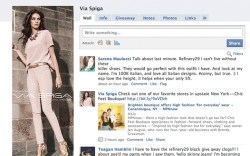 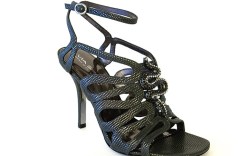 Via Spiga is getting up close and personal with consumers this fall, as the brand launches a new advertising campaign and becomes more social — both online and in person.

The September issue of Vogue will feature fresh images for the brand that reflect an evolved identity. After years of glossy, high-fashion shots, the new campaign portrays a day-in-the-life of a Via Spiga woman. “We felt we needed to get more personal,” said Jennifer Lamoureux, director of marketing for parent firm Brown Shoe Co.’s better and image brands.

The campaign marks the sixth year the label has worked with Vogue, which collaborated on the four-page spread. No other consumer print placements are planned.

Elsewhere, Via Spiga is making a major digital push to strengthen its connection with consumers one-on-one. In May, for instance, it relaunched its e-commerce site with better optimization and new features such as video. It also debuted on Twitter and Facebook this past spring, and has begun working with popular fashion blogs, such as Highsnobette.com, Refinery29 and Stylelist.com, to reach new audiences. As a celebration of its anniversary, the brand is holding a contest on the blogs on the 25th of every month until the end of the year.

“It’s amazing how passionate these bloggers are,” said Lamoureux. “It’s a great way to reach the shoppers who wouldn’t usually buy Via Spiga.”

Brand consultant Patricia Pao said blogs are a useful marketing tool, if used correctly. “[They can] be effective, but only if the bloggers are sincerely and truly interested in the brand,” she said, adding that a team of key opinion leaders could serve as brand ambassadors for Via Spiga and add credibility.

Since the arrival 18 months ago of new creative director Paola Venturi, Via Spiga has been working to build a cohesive brand identity based around Venturi’s vision. Jay Schmidt, SVP and GM of image brands for Brown, said they began with the product and branched out from there, to everything from store design to marketing. “Our message is all about attainable fashion and making fashion accessible to modern women,” he said. “And now all our efforts are tied back to that.”

Venturi’s presence is being felt not only at the drawing table but on the consumer level, as well.

This fall, she will be making personal appearances at retail locations, and will begin writing an “Ask Paola” column on Viaspiga.com, where she will offer style advice.

For the brand’s 25th anniversary, Venturi also is getting a little creative help from a guest designer. Jewelry maker Kenneth Jay Lane, who has worked with Delman and Christian Dior, designed a capsule collection for Via Spiga, composed of a peep-toe pump and a strappy sandal that incorporate his iconic, crystal-encrusted snake ornament. The shoes will be available this fall for $298 at key retailers, as well as online and in Via Spiga stores.

“Since I started my career as a shoe designer before [doing] jewelry, I loved the idea of creating jewelry for the feet by collaborating on a special capsule collection with Via Spiga,” said Lane. “It was like celebrating Via Spiga’s 25th anniversary by giving a gift to its customers.”

The celebrations will continue on Aug. 2 (the eve of FFANY week) at the Empire Hotel in New York, where Via Spiga will host an industry party to mark its milestone, with Lane attending as a special guest. “It will be all about celebrating our anniversary,” said Lamoureux.

All these efforts across the different platforms have meant a budget increase for Via Spiga’s marketing department. “We’re spending more this year than last year,” said Schmidt.

However, the emphasis on social networking has allowed the brand to boost its visibility without breaking the bank. Lamoureux said they have been able to tap into Brown Shoe’s larger social media team and now have a person devoted to that marketing piece. “It’s something that’s come on so fast, [so to be a part of it in a big way], we needed a dedicated person,” she said.