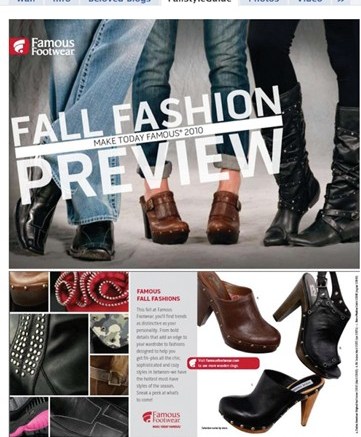 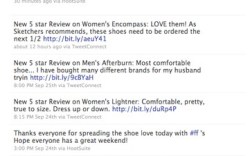 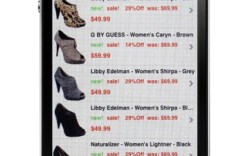 Famous Footwear has always been willing to follow its customers anywhere, and now more than ever, that means connecting with them in the digital space.

Over the past year, the company has fine-tuned its online strategy in an effort to “be wherever the customer wants us,” said Will Smith, SVP of marketing for the retail firm.

And this holiday season, the brand will tie its digital programs and traditional marketing closer together, with a campaign that highlights the brand’s new mobile apps and encourages shoppers to connect with Famous on the Web and in stores.

“We try to be really transparent on how to access us and what we’re all about,” Smith said. “We’ll see more of that kind of activity as we go on.”

Digital outreach is crucial, according to Matt Powell, an analyst for SportsOneSource. “It is important to connect with your customer in every way in which she wants to be connected,” he said. “Famous Footwear is on the forefront of social networking. Only Nike has done a better job.”

According to Pete Hogan, VP of e-commerce for Famous Footwear, his team began thinking about entering the digital arena in August 2009.

“We had a lot of in-house resources,” Hogan said. “We wanted to find a low-cost way to wisely and intelligently get in the space and start getting some [ideas].”

The first result was Shoe Match, an application for the iPhone that let users play a Concentration-like matching game and provided a store locator. But that was just the beginning.

This summer, the chain released its second-generation program for iPhones and Google Android. And it unveiled mobile websites optimized for 3G devices, for Famousfootwear.com, Shoes.com and Naturalizer.com, all of which were developed in-house.

“We’ve been watching the number of visitors coming through [mobile] Web browsers, and that gave us the justification to make a concerted effort,” Hogan said.

Another feature that has moved online is the rewards card.

“We digitally represent a Famous Footwear card [that] customers can [use on] their phone,” Smith said.

Across the different apps and mobile sites, there are key similarities, said Hogan, including deep search capabilities of Famous inventory and easy navigation and sorting functions. There is also a uniform look and feel from the brick-and-mortar stores to the website to the mobile apps and sites.

“It’s another vehicle for customers looking to shop another way. That’s the whole premise of our multiple-channel model: We want to be wherever the customer wants us, and we want them to have a consistent experience.”

So far, Hogan said, the company is pleased with the progress. Soft launched over the summer with no marketing support, he said, the apps have “tens of thousands” of downloads.

And the consumer response appears to be positive, according to user reviews.

On the iTunes site in August, user Brownlace wrote about the app, “I just love being able to shop from my phone. This definitely saves you gas. I can search for the product, call the store to see if it’s available and ask the associates to hold it for me.”

“Love the rewards card option,” wrote user Amy Ochoa. “So cool. Never have to carry my card in my wallet again!”

But Hogan said the company is just starting to see what’s possible in the digital world.

The next big push will come later this month and in early November, when marketing campaigns for the holiday season invite viewers to download the apps and check out the mobile sites.

But even as they expect to see a big rise in engagements with the current offering, the team is looking ahead. On the app and mobile site side, Hogan said, Famous Footwear is staying abreast of the latest operating systems and trends in digital to make sure their products work with the most popular technologies.

And making that process richer as the technologies evolve will be a main focus.

“We tried to make the current [mobile sites and apps] Googlesque, keeping searches simple and quick,” Hogan said. “But eventually we see maturity coming to the space, and people will want the same rich experience on the mobile site as they can get on the website.”

Engaging customers in the digital sphere has meant the company has also started to emphasize customer conversations on Twitter and Facebook.

“[Those sites] are major playgrounds for customers these days,” Smith said. “We try to be transparent on how to access us and what we’re all about, and to do our best to engage you and answer all your questions.”

But it’s not just about serving existing customers, Smith explained.

“We would be remiss if we didn’t have new customer acquisitions as a key strategy,” he said. “We want to get friends to tell two friends and so forth. I really believe that’s what happens in the social space.”

A major focus going forward will be linking the phone-based properties to brick-and-mortar stores. Famous had already developed a dedicated mobile site for store associates to help customers find sizes and colors in other stores, and that is a possible new front for further innovation, according to Hogan.

“What will the customer want to do on their mobile device while in their store?” Hogan asked. “That’s what we want to answer so we can best position mobile so customers can shop remotely but also engage in their experience while in our stores.”

Smith added that the company is searching for other ways users can interact with Famous on their phones.

“We are evaluating activity in the Foursquare space and on Facebook Places to [understand] the whole targeting and location-based activity aspect,” he said, noting that the programs could be used to encourage consumers to text the brand for special offers.

For 2011, the digital efforts are expected to grow, Smith said.

“We’re even starting to play with 2-D barcode technology that allows you to opt in to get more communication,” he said. “More and more of our vendor partners are trying to jump into that fray with us.”

While Smith declined to name names, he said next year should see several co-branded efforts in the 2-D barcode space, as well as in the digital space as a whole.

“We spent more [on digital] this year than last year, and we’ll spend more next year than this year,”  he said. “That’s really just trying to follow where the customers are going, to be fully present and relevant to them.”