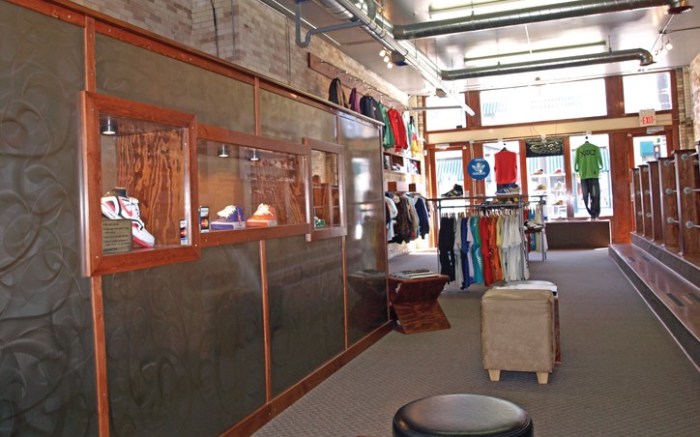 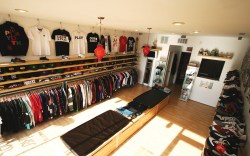 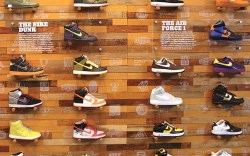 Despite a deep recession in Michigan, three independent sneaker boutiques have forged businesses in unlikely towns and are managing to stay above water. As the state faces a $1.58 billion deficit, these three retailers are carving their own niches in the marketplace, relying on exceptional customer service to prosper.

For Jason Stewart, a Grand Rapids native, opening a sneaker shop was natural. “It’s always been a passion of mine,” he said. “There’s nothing like chasing down a pair of sneakers, so I thought, ‘Why not bring it close to home?’”

In business since December 2005, All City Kicks is one of the only sneaker boutiques in western Michigan, according to Stewart. He also has exclusive contracts to carry select items at his shop, avoiding direct competition with other footwear stores in the area. And despite the recession, Stewart said All City Kicks still saw a 5 percent sales increase in 2009 to more than $250,000.

But getting those results has meant hard work and keeping up with the trends. “Most of the people who shop here are fashion forward and want something outside of the box,” Stewart said. “The average customer is into streetwear and skate.” (A majority of All City Kicks shoppers are between the ages of 18 and 24.)

Nike makes up 70 percent of his business, with the highly exclusive Nike Quickstrike on offer. But while the market is still strong for product such as the DJ AM Nike Dunk Highs, which dropped at the store on Jan. 16, Stewart said products that previously sold out on the first day now take a few days to clear. And though prices for footwear range from $90 to $120, Stewart said the price point that works best is less than $100.

These days customers looking for something different are turning to Clae, Stewart said. “Clae has been more popular with the mature audience that wants a casual look.”

Not every sneaker boutique gets acknowledged by the likes of Jay-Z, but the rapper publicly gave Royal Oak’s Burn Rubber his personal stamp of approval during a performance at Eastern Michigan University last fall.

Located just three miles outside of Detroit, Burn Rubber has seen its sales increase every year since 2007, when co-owner Rick Williams took over the store with partner Roland Coit. (Last year’s sales tallied more than $500,000.) “Out here,” Williams said, “we’re trailblazers for our culture.”

The duo’s first move was to add a collection of apparel and began to broaden the selection of footwear beyond Nike and Converse to include brands such as New Balance, Pro Keds, Supra, Adidas and Puma. And although Burn Rubber’s average footwear prices are $100 to $200, Williams said business has not been hugely affected by Michigan’s current economic turmoil. “Most of our consumers are in high school or college,” Williams said. “They don’t have to pay mortgages or loans yet, so the recession hasn’t hit them as much as everyone else.”

In July, Burn Rubber garnered local media attention when a crowd of sneaker aficionados camped out in front of the store for a week, waiting to get their hands on a pair of Nike Air Yeezys, which sold for $215 a pair. But Williams said the secret to the shop’s success has been creating a unique identity. “Our regular shoppers go to Foot Locker, but also come here,” he said. “They know we have something they can’t find anywhere else.”

Puffer Reds has been a staple of downtown Ypsilanti for more than 30 years. According to owner Eric Williams, the store is a “destination” for shoppers looking for music, apparel and footwear — but that wasn’t always the case.

Originally a record store, it changed when Williams added sneakers in the early 1980s. “Run DMC was really big at the time with their song ‘My Adidas,’” Williams said. “So it made sense to add footwear.” (The store’s connection to Adidas doesn’t end there. In 2008, the brand chose Puffer Reds to be one of four stores in the country to host a celebration for the 25th anniversary of the Forum basketball shoe. The party brought 3,000 customers in one day.)

Williams said Puffer Reds’ longevity can be attributed to a commitment to its shoppers. “We’ve been around for a long time, and it’s because we go out of our way to service customers,” he said, adding that an exclusive brand mix has helped.

Footwear makes up about 65 percent of sales in Williams’ two stores (a second location opened in nearby Wayne in 2005), led particularly by Nike and Jordan. The owner said he has had great success with the Jordan Retro XI and Retro XII, as well as the Valentine’s Day edition Nike Air Force 1.

Looking at the coming season, Williams said his customers are simplifying. “People are moving further away from wild colors,” he said. “People are going back to cleaner, solid colorways, like white and black.”