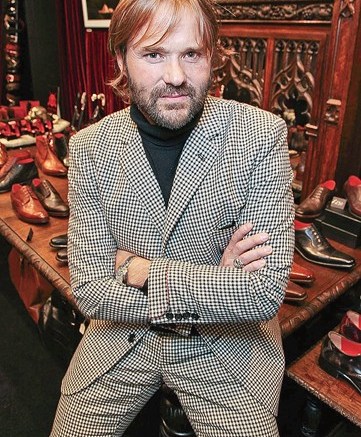 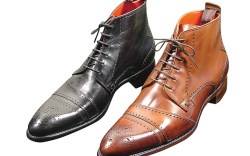 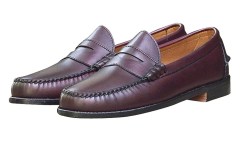 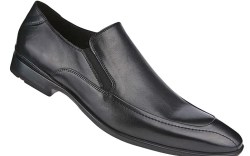 Heading West
British shoe label Jeffery-West is crossing the pond. The eclectic Northampton-made men’s brand is targeting American retailers, as well as launching an e-commerce site, Jeffery-West.us. Brand co-founder and designer Guy West (at right) visited New York this month to announce the company’s plans, and despite the economy, he said now is as good a time as any to expand. “Cautiously optimistic seems to be [the sentiment among retailers],” West said. “Eighteen months ago, this might have been too much for them. We aren’t naive enough to think everyone is going to be beating a path to our door, but I definitely think there is interest in the kind of thing we do.”

Founded in 1987 by West and business partner Mark Jeffery, the brand aims to bring classically constructed, Goodyear-welted shoes to men who desire a more flamboyant look. The fall ’10 collection, dubbed Hell Raisers, was influenced by the people West most admires, such as Peter O’Toole, Keith Moon and Brian Jones.

The collection, retailing from $550 to $630, has already been picked up by Against Nature in New York. In the future, Jeffery-West could open a store in the U.S. (it already has five in the U.K. and one that just bowed in Amsterdam). “It has been discussed, but we know we have to make sure people know of us and like the shoes and that tradition of Northampton, but with a different handwriting,” said West.

Maine Made
Rider Boot Co. is launching a line of hand-sewn, made-in-Maine styles for fall. The new collection, manufactured by Rancourt & Co. in Lewiston, includes full-strap loafers, beef-roll loafers and a driver, each available in black, brown, burgundy and cognac (with special requests also an option). Rider also is offering three casual styles — a three-eyelet derby, a beef-roll penny strap and a two-eye chukka — on 25-year-old crepe soles that have been reheated and reactivated. All the hand-sewn shoes are available for September/October delivery and will retail for $225 to $325, or higher for special orders. Leffot in New York, for instance, requested an exclusive Venetian-style loafer made of shell cordovan in four colorways, retailing for $625.

Coming to America
German shoe brand Lloyd is making its U.S. debut. The men’s brand boasts 50 retail stores in Europe and Asia and now hopes to expand further with American wholesale accounts. The brand has been working the trade-show circuit with its different lines. In addition to the main collection, an extra-wide line featuring Latex bottoms and an extra-light line are available, as well as the upscale 1888 line of shoes hand made in Germany. The main collection retails for $165 to $265, the 1888 offering is priced at $295 to $310 and Goodyear-welted shoes go for $600. About 150 styles are in stock and ready for immediate delivery.