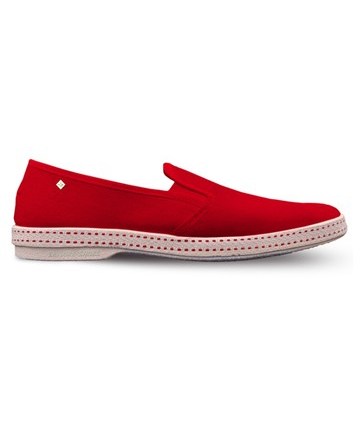 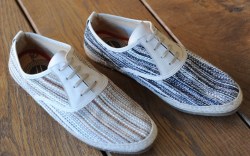 Casual, beach-appropriate shoes are dominating the men’s category in Europe, prompting many to predict the trend will reach even further come spring ’11.

Neil Steptoe, head of men’s buying for Kurt Geiger, said, “We stock Maians, which is flying out, and we will be doing the H by Hudson ones next season.”

So far, Maians, which sells to 80 stores worldwide has a large following in Europe, with accounts at Kurt Geiger in the U.K. and Killiwatch in Paris. It has one U.S. retailer: Untitled in Chicago, where the collection retails for $90 to $130.

“We are excited about our Compass launch and getting our foot in the door of the U.S. market,” said Chad Weimar, one of the brand’s three owners.

Rivieras exhibited at last month’s Bread & Butter show in Berlin with a selection of Spanish-made vulcanized styles with cotton mesh uppers, with a starting retail price of $67.

Owned by Fabrizio Corveddu and his cousin Danamza, who designs the shoes, the brand has been picked up by Dover Street Market in London and Colette in Paris. Last month, the company signed a deal with Opening Ceremony to wholesale the brand in the U.S.

London-based H by Hudson will unveil its casual collection later this month, at Capsule in Las Vegas. “The Caymen and Belafonte [styles] were inspired by my trip to Greece, where all the fishermen were wearing vulcanized-soled shoes with a mesh upper,” said design director Vicky Haddon.