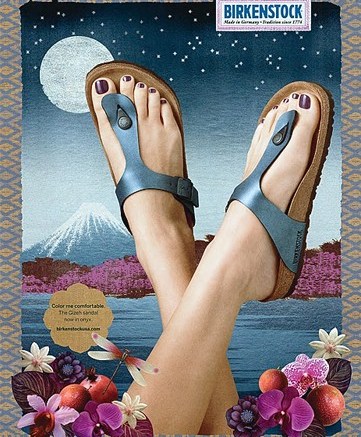 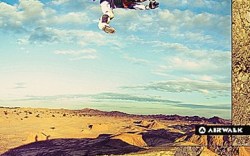 Fashion is at the forefront of Birkenstock’s spring campaign, which puts its three most popular sandal styles — the Gizeh and Madrid for women and Arizona for men — in glossy, colorful settings created by mural artist Amy Guip. “The key is translating our unique brand story, because folks often want to pigeonhole us,” said Shelly Glasgow, director of brand development for Birkenstock. “While we’re happy to be hippie, we’re also hip.” Glasgow said the company decided to embrace its trendy side after seeing numerous celebrities sporting the brand, including Usher and Robert Pattinson. That also prompted Birkenstock to increase its media buy by more than 25 percent and go into a men’s magazine (Men’s Journal) for the first time, and into ReadyMade and Yoga Journal, which reach younger audiences. “Our biggest demographic is … a 24- to 36-year-old, but we want to talk to her younger sister or best friend,” Glasgow said, adding that the marketing concept, created by longtime agency Duncan Channon, would return in the fall with new product.

Up in the Air

Airwalk is putting its money where its name is, with some gritty, high-flying marketing imagery. The shots, taken of the label’s athletes in their natural environments, are part of the spring campaign, called “Find Your Way.” “We felt the best way to communicate that would be to show the athletes doing what they do,” said Eric Dreyer, VP of brand management for Airwalk. The label hired several well-known photogs to create the journalistic feel, including Ryan Allen, who shot skateboarders Andy Mac and Tulio De Oliveira; and Daniel Russo, who captured surfers Anastasia Ashley and Warren Metcalf at Chun’s Reef on Oahu’s North Shore. Having that pedigree meant an increase in the brand’s imagery budget from 2009, but Dreyer said it was worth it. “You’ve got to progress,” he said. The brand also added a new member to its sports stable this season: motocross star Ronnie Renner (at right), who was shot by Mike Basher in the deserts of Ocotillo Wells, Calif. According to Dreyer, Airwalk hasn’t been in the motocross scene since the late 1980s and early ’90s, but decided to jump back in after meeting with Renner. His image will appear in the June issue of Transworld Motocross. Other shots will run in Spin, Foam, Skateboarder, Snowboarder and Surfing, and on the brand’s Website and social media sites.

Model Jessica Stam is returning as the face of Aldo’s fall ’10 campaign, and she’ll be joined this time by male model Matt Gordon. The campaign was being shot last week at Milk Studios in New York, with Terry Richardson behind the lens once again. “It’s cool because Jessica and Matt are both Canadian, and Aldo is a Canadian brand,” said the company’s creative director, Douglas Bensadoun, calling from the shoot. “Jessica’s from Ontario and Matt’s from Alberta.” … Back above the border, Canada’s Browns Shoe Shops Inc. tapped nearly 40 celebrities to star in the latest edition of its magalog, B Magazine. Gracing the front cover is model du jour (and Vancouver native) Coco Rocha in Cesare Paciotti sandals, with venerable actor Christopher Plummer donning Gucci loafers on the back. In addition to sporting hot spring styles, the celebs also promoted their favorite charities.