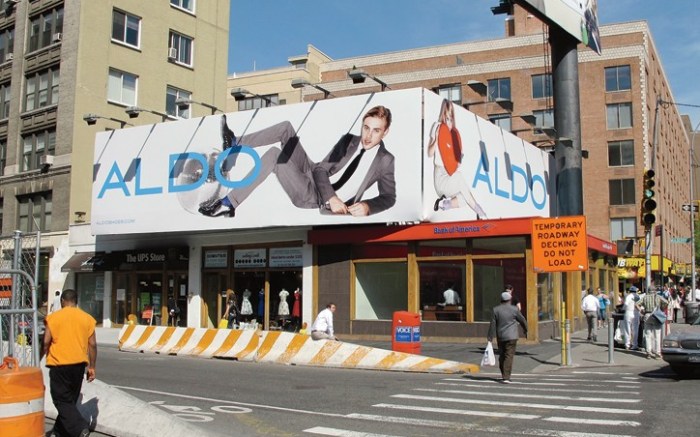 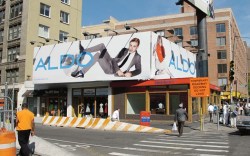 NEW YORK — Though billboards and bus ads are not new to the urban landscape, more and more footwear companies are getting creative with their out-of-home marketing, taking over new locations and integrating their efforts with social networking. The result, according to experts, is more eyes for the taking.

“There’s a lot more opportunity now to be clever,” said Stephen Niedzwiecki, founder and creative director of the Yard agency, which works with brands including John Varvatos, Converse and Frye. “Outdoor [advertising] has become a really good vehicle. Now there are a lot more ways of making an impact.”

When Jimmy Choo launched its eyewear line this spring, it posted ads on telephone kiosks in Manhattan, inviting passersby to take a picture of the ad, upload it to the Internet and get entered in a giveaway.

In addition, many brands are starting to incorporate barcodes into their advertisements to extend the connection with consumers. An application on mobile devices can scan the codes and then connect directly to a specific location, such as an e-commerce site, Facebook or YouTube.

Advertisers also are finding new venues to reach shoppers. On Fifth Avenue in New York, for instance, where many shops were vacant during the recession, brands took over the windows, using them as street-level billboards.

According to Douglas Bensadoun, creative director and GM of marketing for Aldo, large spaces like that are high impact and are the best medium for full lifestyle imagery.

However, the company is continually mixing up its placements. In the past it has used taxi tops, phone kiosks, subway entrance panels and billboards, though recently it has pared down its spend to include mainly the taxis and its Soho-area billboard.

She noted that the company will continue its efforts in the coming year, and is talking about linking the outdoor ads with its digital campaign.

However, one drawback of outdoor campaigns, said Yard’s Niedzwiecki, is that they are more difficult to measure than print placements, which offer guaranteed circulation, or digital campaigns, which can trace page views and other highly specific data.

It also is still expensive to purchase prime placements. Bensadoun estimated that 60 percent of Aldo’s spring advertising budget went to out-of-home, with 25 percent in print and 15 percent going to online.

However, there are bargains to be had. The Zacky’s and VIM retail chains in New York have been regulars on city buses for almost 15 years by buying last-minute ad spaces at discounted prices.

“If [CBS Outdoor, which books most transit marketing], can’t sell the space, they know they can come to us and the decision will be made in a day,” said Zacky’s owner Zacky Joseph.