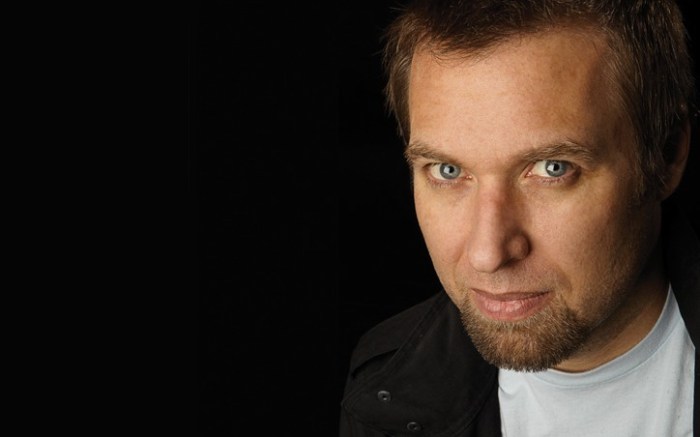 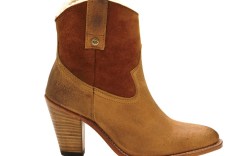 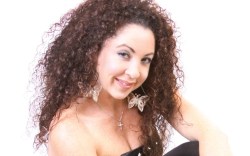 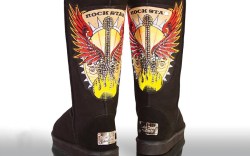 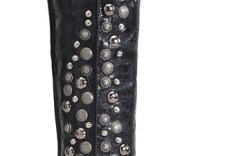 Roots: Launched as a resource for premium sheepskin boots, Koolaburra was acquired in 2005 by CEO Jeff Rawlings, who has put a fun, edgy spin on the brand’s heritage. Surfer silhouettes have been reinterpreted in novelty print leathers and with tattoo imagery.

Point of view: Comfort, uniqueness and fun drive the brand, said chief product officer Kris Zacharias (at right). While shearling has its construction limitations, he said, there are still innovative ways to use the material. “The challenge is making [products] relevant and all-season,” he said about Koolaburra’s move into new product such as sandals. “It’s more than the classic [surfer] silhouette.” Consumers, he noted, are now realizing they can wear sheepskin in a variety of ways, even during the warm weather. “It’s about educating them and getting them to recognize it’s more beneficial to wear shearling than a closed leather shoe that doesn’t breathe. When people see shearling, they think snow. We’re trying to get away from that [idea].”

Fall ’10: “I’m putting a futuristic spin on the surfer style with the Modern Classic series,” said Zacharias, referring to a trio of sleeker, more-feminine silhouettes with low-profile athletic bottoms. The brand also is expanding into Goodyear-welt and cement constructions in military and Western looks. “They’re traditional constructions with shearling touches,” said Zacharias. Also in the mix are updates of the core Boho and Rocker Chic categories that incorporate novelty fringe and oversized studs.

Roots: Creative designer Melissa Armstrong (at right), a native Australian, founded the company after developing a private-label footwear line for her parents’ clothing boutiques. She later introduced her own label in Australia, eventually launching a shearling collection.

Point of view: Armstrong infuses the line with plenty of glam. “It’s something the big boys won’t do,” she said. “We’ve incorporated lots of metallics and beading, snake prints, leather straps, animal prints and clear gloss finishes. I keep an eye on what the greats are doing, such as Versace, who I absolutely love.” For even more eye candy, the companion Ozzessories line is launching this spring, with leather and sheepskin bands embellished with crystals and studs that allow customers to personalize their boots. “We bling them out,” said Armstrong.

Fall ’10: Highlights include classic silhouettes in metallics, prints and special finishes, with beading and strap details. The Fur Fabulous collection put Ausiie on the shearling map, Armstrong said, and will include the original Furgy I style for fall ’10, detailed in metallic snake print. “It’s so glamorous and fun,” Armstrong said, noting that a Furgy II and III are in the works.

Australia Luxe Collective
Founded: 2004; Venice, Calif.
Roots: Husband-and-wife team Stuart Rush (as president) and Nicole Durand (as creative director) offer footwear and accessories including gloves, bags and jackets to complement the brand’s core boots. With a foothold in the shearling market, the founders have added rainboots and cement-construction, crepe-sole suede boots, both with shearling touches. For spring ’10, a capsule range of boat shoes and clogs also use elements of shearling.

Point of view: Durand is determined to take the “ugly” out of the surfer silhouette by giving it a more feminine look as well as details such as fur trims and oversized studs. Durand also pushes the limits when it comes to boots with sexy over-the-knee heights.

Fall ’10: Durand has gone back to the Victorian era with her Victorian Rock Star series. “The opulence of the era was fantastic and is still apparent in 20th- and 21st-century trends,” said Durand. “Our Victorian theme has moved into a fabulous [interpretation] of the era, along with 1980s rock stars. [It’s] the fashion of the New Romantics, such as early Adam Ant, Duran Duran and Prince and the Revolution. They all had frill shirts, brooches, feathers and crystal flamboyance.” Durand is translating the look into boots with military crest crystal brooches, embroidery patches and ruffles. Swarovski crystals provide some sparkle. She’s also putting a luxe touch on rainboots, with shearling trims, buckles and laces.