Made in U.S. Brand Vere Set For January Launch 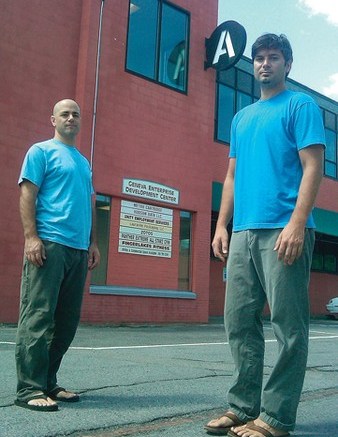 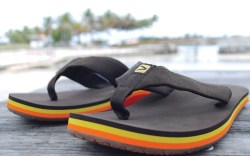 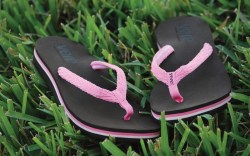 John Eades and Michael Ferreri are hoping the “buy local” rallying cry of the food industry can spread to sandals. Manufactured in upstate New York, their new line of green-oriented flip-flops, Vere, is set to ship in January.

Eades, a footwear designer who has worked at New Balance, Airwalk and most recently Reef, said the idea came to him while tagging along on Reef sales calls. When he was laid off from his design position at that brand last summer, he recalled what retailers had been telling him about their desire for product made in the U.S.

“Having been in the factories so much and having seen the process,” Eades said, “[I thought], there’s a way to do this better. I know there is.”

Using private equity and job-creation loans, as well as some volunteer labor from friends and family, childhood friends Eades and Ferreri set up shop domestically for a total cost in the low seven figures. The result is Vere, a six-style line of three-point flip-flops for men and women, made with EVA footbeds, and webbed and leather straps. Their product, which will retail for $25 to $50, is being made in Geneva, N.Y., a town of 14,000 people in the Finger Lakes region — and the place where Eades and Ferreri grew up.

“The town was impressively supportive of what we had planned, and it had a lot of resources to offer,” Ferreri said. Among them was a 1,200-sq.-ft. former American Can Co. plant that the Vere team leased from the city for a graduated fee. Geneva’s business development board also gave Vere access to a suite of low- and no-interest loans, based on plans to employ nine local workers on the production line, and as many as 30 people in three to five years.

But manufacturing in the U.S. with a completely new workforce meant giving extra attention to minimizing waste and creating product that’s as green as possible. “Our entire process is based on efficiency,” Eades said. “It was the only way we could afford to do it here.” Eades worked with a former colleague from Reef to create a streamlined manufacturing process, reducing the number of molds and lasts and keeping production swift and largely hands-off.

The materials were chosen with the same goals. Recycled nylon webbing is sourced from Pennsylvania, and leathers will come either from New Hampshire-based Prime Asia or from ISA Tan Tec. (While ISA Tan Tec is located in China and Vietnam, it works with low-impact leathers, Eades said.)

EVA has been the toughest thing to source. Unable to find a domestic manufacturer that was willing or able to recycle the leftover scrap, Eades and Ferreri are getting their footbeds from China, where the factory will cut the footbeds from recycled EVA and then incorporate all the scrap into the next day’s batch. But, the duo said, they’re hoping a U.S. source will materialize as the brand grows.

To sell the sandals, Eades and Ferreri hit up core surf shops in California, Texas, North Carolina and Virginia. And of the 14 stores approached, said Eades, 11 signed letters of intent.

Robert Farmer, co-owner of Outer Banks Boarding Co. in Nags Head, N.C., said Vere’s local roots appealed to him, as did knowing that a shipment of sandals was a day’s journey away. “The use of foreign labor has created an issue where the lead times are preposterously long,” he said. “I’m looking at spring ’11, and it’s not even July. That is the most offensive part of the overseas [market]. The brands are telling us to plan our business before we even get a read on this season.”

The fact that Vere is a new brand with little to no name recognition does not faze Farmer. Instead, he said, it’s an opportunity to differentiate his brand mix.

“With Vere being a startup, it gives us a chance to have distribution with a core surf brand that isn’t in all the department stores, all the mall stores, all that stuff that’s killing the surf industry,” he said. But ultimately, Farmer expects his customers will respond to Vere’s local story. When it comes to buying American goods, he explained, “if a customer has a choice — which is not the case right now — and if the price differential is somewhat negligible, then people will absolutely do it.”

For Surf & Adventure Co., in Virginia Beach, Va., manager Cody Mathews said Eades’ passion for quality sold him on the line. “For me, personally, made-in-America is great, but the quality got me really pumped,” he said. “The way he talked about sandals was the way a car engineer would talk about a car. I thought that was a really cool approach, a really fresh perspective.”

Mathews also predicted the brand’s local initiatives would appeal to customers. “With any better product, anytime there’s a story behind it, that helps people invest in the brand,” he said.

And for Diduro Shoes in Geneva, the chance to support a hometown manufacturer was one manager Michael Buck couldn’t resist. “It’s great for Geneva. It’s jobs for our town,” he said. “I’m all for it. But I think American-made also means a lot to certain people [outside Geneva]. I’m looking forward to the launch. They know what they’re doing.”