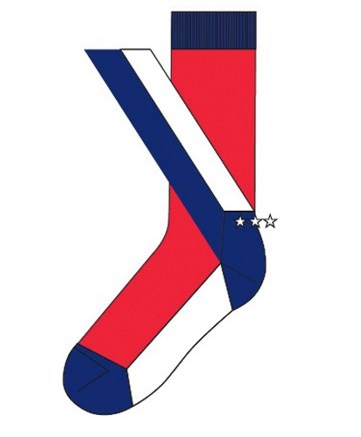 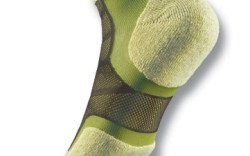 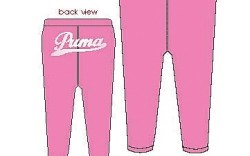 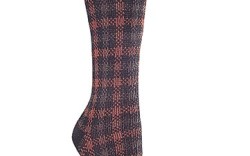 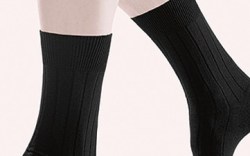 Happy Hour
Stockholm, Sweden’s Happy Socks has collaborated with scarf brand Wong Wong to launch a World Cup sock line inspired by the soccer history of nine countries: Argentina, Brazil, the U.K., France, Germany, Holland, Italy, South Africa and the U.S. Stars are used to represent the number of past wins for each country. The socks, distributed by House of Brands, display the country’s colors, flags and knits and will be available at Urban Outfitters for $12.

Making Change
Next month, Edgewater, N.J.-based Glogover Hosiery will debut Convertibles, pantyhose featuring a patented design that allows the legwear to be worn three ways. With no toe seam, the hosiery can be worn as closed toe, open toe and ankle high. Convertibles are made from a combination of fabrics, including 20-denier, nylon and Lycra spandex. The hosiery includes a cotton gusset and shape-enhancing waistband and is offered in nude and black, in sizes A (4’10”/90 lbs.) to D (6’0”/230 lbs.). Retailing at $10 per pair, Convertibles can be found at Glogoverhosiery.com.

Rockport Files
The Rockport Co. of Canton, Mass., has licensed its legwear to manufacturer and distributor United Legwear. With the deal, the company aims to build its wholesale accounts. A new collection, called Seven to Seven, is scheduled to launch for fall ’10 and includes a dress sock meant to keep feet dry while supporting the arch. The Walkability line features cushioning for the foot, while an additional sport-inspired line boasts Coolmax, arch support and mesh cushioning for comfort. All three collections — comprising about 50 styles in all — are set to retail for $3 to $12. Available in Rockport retail locations, the socks also are being targeted to department stores and family footwear shops.

Silk Stockings
Statesville, N.C.-based Thorlo recently introduced its merino wool silk brand, Experia. The two-style collection includes crew socks and micro-mini crew socks, available in nine colors including charcoal and brick red. Retailing at $17 for the micro-mini crew and $20 for the crew, the line can be found at Dick’s Sporting Goods, The Sports Authority, Fleet Feet, Hibbett Sports and other specialty running stores.

On the Marc
Inglewood, Calif.’s K. Bell has signed a multiyear licensing agreement with Marc Ecko Enterprises for the Ecko Unltd., Ecko Red and Marc Ecko Cut & Sew brands. Set for a spring ’11 debut, the lines will soft launch for fall. Core and active socks under Ecko Unltd. will sell in packs of three for $15 to $18. The female component, Ecko Red, will offer a range that includes individual tights and leggings for $8 to $12, with packs of three priced at $15. Contemporary menswear line Marc Ecko Cut & Sew will include premium singles for $8 to $10 and packs of three for $18. The collections will be available in better department stores, specialty chains and Marc Ecko retail locations.

Fiber First
Puma is using the absorbent synthetic fiber Sorbtex to improve its basic legwear for fall ’10. The new offerings — for both women and men — focus on color, as well as comfort and extended wear. The logo on the legwear complements Puma shoes, using bright colors and trim details. Sorbtex technology also is included in all children’s legwear, as well as in fashion leggings for young girls. The Herzogenaurach, Germany-based brand’s offering will retail for $4 to $16.

Golden Touch
For fall ’10, Gold Toe is debuting new designs on its women’s socks, such as stripes, diamonds, large argyle and gingham plaid, while men’s details include pin dots, ribs, large argyle and plaid. All socks are made with moisture-control fibers to help keep feet drier. And to go along with the fresh details, New York-based Gold Toe plans to update its packaging design for 2011. Men’s socks retail from $8 to $10 for a single pair, and women’s sell for $5 to $8 per pair. The line can be found at department stores such as Macy’s, Lord & Taylor and Dillard’s, as well as online at Amazon.com.

Back to Black
Swiss entrepreneur Samy Liechti is bringing his sock delivery service to North America through Blacksocks.com. Liechti founded the company in 1999 in Wallis, Switzerland, to provide businessmen with a regular sock service he calls a “sockscription.” Customers can sign up for one-, two-, three-, four- and six-time deliveries of three pairs of socks each, through a new Website that debuted last month. Blacksocks are made in Italy of Pima cotton, plain cotton, mercerized cotton, wool and cashmere. Calf, athletic and business socks retail for $10 per pair, knee socks go for $12, cashmere socks are $25 and ski socks are $38. The Blacksocks brand also offers a selection of undershirts, boxer shorts and briefs, and travel shave kits.

Heat Is On
Heat Holders, the thermal sock brand sold by Bolton, England-based Sock Shop, has enlisted the help of the first winner of the British reality TV show “Big Brother.” Craig Phillips (below), now the host of the British design show “60 Minute Makeover,” is endorsing the brand, which aims to keep feet warm in the cold. Heat Holders come in a variety of men’s and women’s styles, retailing for 5 pounds to 7 pounds, or about $7.50 to $10.50 at current exchange. A children’s line is in the works in the long style, retailing for 5 pounds, or $7.50.

Get Smart
For fall, SmartWool of Fort Collins, Colo., is introducing a complete line of hunting socks that utilize its Wool-on-Wool Technology for more durability. The trademarked technology puts more wool in high-wear areas to reduce shock and abrasion. The SmartWool Fit System provides arch and ankle support to prevent bunching and slipping. The hunting line is available in light to extra-heavy crew and over-the-calf styles, and retails for $17 to $30. SmartWool also is debuting the Park Art Gallery Limited Series, featuring two graffiti-inspired styles from artist Debbie Clapper. The styles, called Park-Crystalize and Park Melt, each utilize the company’s Four-Degree Fit system, as well as the Wool-on-Wool Technology, Duroyarn reinforcement and strategically placed mesh for ventilation. Socks in the series retail for $25.