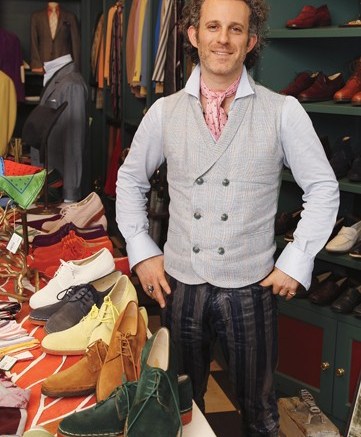 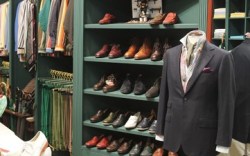 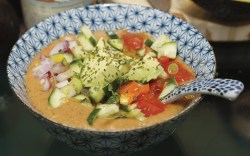 So when the New York designer and retailer suffers from the doldrums, he stimulates his creative mind by cooking. Kos recently whipped up a bowl of fresh gazpacho for Footwear News in his Park Avenue store, where he sells his own high-end menswear and a line of handmade men’s shoes.

Chopping vegetables in a store surrounded by expensive merchandise might seem like an odd activity, but Kos believes otherwise. To him, the location makes perfect sense — after all, preparing food has inspired some of the pieces in his store.

“[About a year ago] I was in a rut,” said the 38-year-old, whose celebrity clients include Sean “Diddy” Combs. “I was in a rut with the concept that up here [on Manhattan’s Upper East Side], everyone wants to be the same — they don’t want to look different. I had to go to one of my other areas of creativity to inspire me to get back to what I was doing. I was getting bored.”

That’s when Kos launched a food blog that chronicles his search for local, raw ingredients. It was a move that served as the perfect recipe for creating a new collection, he said. Part of the result: a line of bucks that come in 11 different colors. (And contrary to reports, they are not a collaboration with G.H. Bass, but handmade in Italy for Kos and retailing for $695.)

“I’m obsessed with color. I’ve always carried Edward Green [shoes], but I got bored with one concept and I had this idea for the colored bucks,” Kos said. “Accessories are so big right now, so if guys are just going to wear a gray suit, then why can’t they also wear a great pair of pink bucks?”

Next, Kos is working with a Texas bootmaker on a cowboy boot that he describes as part traditional boot, part English men’s shoe. It will be available this fall, starting around $2,000.

The designer also is interested in moving his store downtown. The New Jersey native opened the current space eight years ago, after getting his start selling discounted brand-name apparel throughout New Jersey, Connecticut and Pennsylvania.

With so much business on his plate, he plans to continue looking to the kitchen for inspiration. He is even pursuing his own cooking show. Kos recently shot with the BBC in London’s Spitalfields Market, and he’s appeared on 24Savvy.com, making an egg and artichoke dish with Kelly Rutherford from “Gossip Girl.”

“Some people in London are interested [in the show],” he said. “But I’m bored with the cooking scene. I don’t want to watch someone in a kitchen cooking. I think, in some ways, it’s about the process [of making food] and who you taste it with.”

For Kos, that’s his wife, Amy, and children Sophie, 10; Jack, 7; and Luke, 18 months. Each has a specific favorite, but Kos said he also enjoys trying new dishes.

“To me, everything is a hobby, even my career,” said Kos. “I’m a spoiled brat. I have to have fun. If I’m going to be cooking or designing, it has to be fun.”

>> Cold Calling: Kos eschews recipes, choosing instead a trial-and-error method. Here is how he makes a hearty gazpacho.

2 cans of San Marzano tomatoes “This is the best brand for canned tomatoes.”
2 avocados
2 cucumbers
1 red onion
1 yellow pepper
1 shallot “I’m using shallots because garlic is not quite in season. And shallots, to me, are not as strong as garlic or onion.”
Chopped scallions
Cilantro
Splash of olive oil
Splash of lime
A pinch of peppercorns “This is my secret mix of peppercorn from the Greenmarket [in New York].”