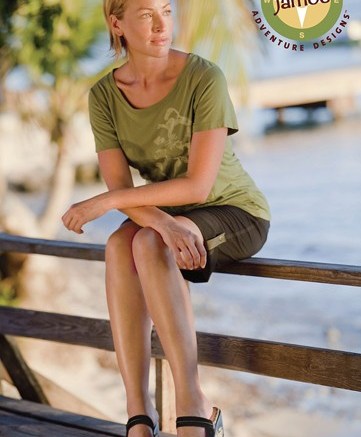 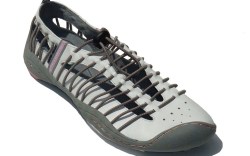 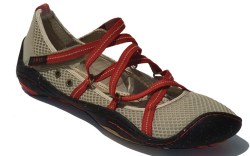 Vida Shoes International is taking a bigger bite out of the women’s comfort market.

Fueled by the success of its J-41 line of adventure-inspired looks, the New York-based company introduced a sister brand last spring and is now stepping into the booming barefoot category.

Jambu, the company’s new companion label to J-41, launched for spring ’10, after management saw an opportunity to expand its distribution by going upmarket. (J-41 has been around for nearly a decade.)

“We see ourselves as a $100 million [business] within five years,” he said, noting that he expects double-digit sales increases in 2010.

However, to reach the long-term goal, he added, the company realized it needed a “multidimensional platform.”

Though priced differently — J-41 retails for less than $100 and Jambu ranges from $99 to $189 — the brands share the same design philosophy, with Hanna Shin heading the design team.

“We fused together outdoor, athletic and comfort,” said Jonah. “All our attention is paid to the active woman. She could be a runner or a yoga instructor. She’s outside living life. We want to connect with these people.”

To further distinguish the two brands, Jambu will now offer a green element, outfitting some looks with recycled outsoles and textiles. And about 5 percent of the line is vegan. “It makes some people feel good that we’re not using animal products,” Jonah said.

Additionally, a concise collection of children’s styles under the Jambu label are currently sold through Garnet Hill, REI and Hanna Andersson.

Jambu also will be the launch pad for new technologies that may eventually trickle down to J-41. First up is the Bare Feet Designs collection of minimalist footwear, set to debut for spring ’11. Not to be confused with the barefoot running trend, said Jonah, the line instead is intended to fit into the burgeoning wellness category. The feel [of the shoes] is the product’s chief goal, he added. “[That’s] the most important element of wellness.”

While Bare Feet Designs doesn’t tout a list of health and fitness features, it does have its benefits, added Jonah. First and foremost is that it allows the body to use its own momentum to exercise.

Bare Feet Designs shoes, priced at $99 retail, could represent up to half of Jambu’s business down the road, predicted the executive. “It’s good for the body. It’s meant for everyday life. It’s an important piece of what we’re delivering in outdoor-adventure,” he said.

The company’s expansion has meant an increase in wholesale accounts. J-41 had an independent base of 600 stores, and Jambu has already added another 100 stores, said Jonah.

Among the newcomers is Alan’s Shoe House in Tucson, Ariz. Alan Miklofsky, president and CEO of the retailer, said he was surprised by the immediate success of Jambu. “It just started selling and selling, and the staff loves it,” he said. “It appeals to a middle-aged to older customer, even though it’s a younger-[styled] brand.”

Leslie Butler, VP of merchandising for Schuler Shoes, a Maple Grove, Minn.-based chain, said Jambu’s appeal comes from its focus on fun colors and designs and such features as memory foam footbeds. “They’re fashionable, but still comfortable,” she said. “The customers are active, young women, although it transcends to older folks.”

Schuler Shoes has been carrying J-41 since 2004, and according to Butler, the store has gradually increased its assortment with the brand. “My business [with the company] has been growing every year,” she said. A key style has been the Tour Journey, a wedge distinguished by the brand’s signature floral detail.

Tops for Shoes, in Asheville, N.C., began selling J-41 two years ago before moving into Jambu. Alex Carr, owner and head buyer for women’s, said both lines fit into the niche also occupied by Merrell and Keen. “[J-41 and Jambu are] casual and rugged, with an outdoor feeling, but not performance,” he said.

The dressier styles, such as the new Jambu Touring sandal wedge, have also expanded the brands’ design scope, he added. “Lots of attention is given to the detail, with delicate floral [embellishments] on the outsoles.”