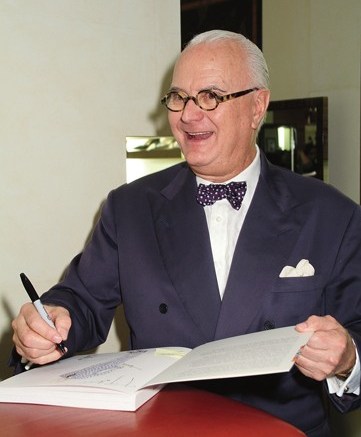 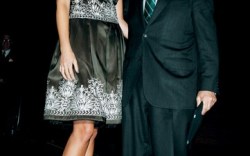 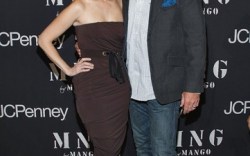 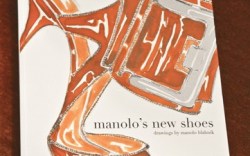 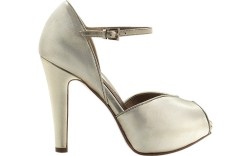 United States of Manolo
Manolo Blahnik has just wrapped his annual U.S. tour and the designer has some serious stateside groupies. Take the ladies from “The View.” When the fuchsia-loafer-clad designer stopped by last week to show off his fall collection, the entire cast donned looks from the line, and co-host Elizabeth Hasselbeck gushed, “You are such an artist, [and] we are all drooling here.”

Fans at Bergdorf Goodman and Neiman Marcus were equally as excited to get up close with the designer, who always has some amazing stories from the road. “One woman asked me to sign her breast,” he told Insider about his appearance in Los Angeles. “I couldn’t sign my whole name, so I simply scrawled MB.”

Still, Blahnik kept mainly to signing shoes and his newly released book of sketches, “Manolo’s New Shoes,” noting that he loves hearing exotic new names and is continually amazed by the spelling of admirers such as Kimmmm (yes, with four Ms), Gillma and Judhie. “I’m mad for names,” he said. “I just love them.”

While Blahnik has grown accustomed to throngs of fans, he said not everything has stayed the same. The designer, who was traveling with niece Kristina Blahnik and Manolo Blahnik USA President George Malkemus (at right), bemoaned the loss of some of his favorite institutions: Tower Records, his go-to spot for buying old movies, and Rumblemeyer’s for its tuna melt and malt milkshakes. (Luckily Martha Stewart was able to step in, whipping up a coconut shake for the designer on her Friday show.) But Blahnik was most alarmed by the new generation’s lack of knowledge of iconic Hollywood, most notably a twentysomething fan who was unfamiliar with Audrey Hepburn. “She said, ‘Oh, I didn’t know they served breakfast at Tiffany’s,’” he exclaimed. “How vile!” Good thing the St. Regis, Blahnik’s New York hotel of choice, offers Turner Classic Movies and that L.A.’s Amoeba Music shop is going strong. “I must have picked up 50 [films], including some very rare Gary Cooper movies,” he said. “I can’t wait.”

Think Pink
Forget what you’ve heard: Michael Bloomberg is a footwear fan. New York’s mayor took the stage during FFANY Shoes on Sale last week to offer support for the cause, but jokingly said he worried his invitation to the event might be rescinded after the New York Post reported last month that the billionaire hasn’t bought a new pair of work shoes for more than a decade. Bloomberg didn’t dispute the article’s claim, but assured the audience that his small footwear collection “is a testament to the quality work that you do, and I hope you see it as such.” The evening’s MC, Ivanka Trump, did not relate to his predicament. “If you average out the number of shoes I have and the number of shoes the mayor has, you come out with a healthy sum,” she said.

Over in the shoe salon, Olympic ice skater Johnny Weir, who has been known to throw on a pair of Christian Louboutin stilettos, was spotted eyeing looks from Fergie, Casadei and Nine West, while the cast of “The Real Housewives of Beverly Hills” mingled in triple-platform pumps with Joan London, actress Angie Harmon and songstress Chaka Khan, who performed a handful of her chart-topping tunes. Though Doris Roberts, best known as the wisecracking mom on “Everybody Loves Raymond,” didn’t do any shopping of her own, she turned out to support the cause and QVC, where she’ll sell a line of Italian dinnerware starting in February. But don’t expect to spot the star donning towering stilettos on air. “I can’t wear the 5-inch heels,” she said. “I just need a 3-inch [platform].”

Mango Madness
JCPenney is getting a healthy dose of star power. Celebs and faces from reality TV stepped out last week to fête the retailer’s launch of MNG by Mango’s shop-in-shop and noted that the footwear offering, from double-strap Mary Jane styles to pointed-toe booties, was spot on. “[It’s] serviceable chic,” said New York “Housewife” Alex McCord (at right), who attended the party at Manhattan’s Capitale in a brown Mango tube dress and Louis Vuitton heels, with husband Simon Van Kempen on her arm. “[It’s] great for JCPenney to get out there with brand collaborations.” Others spotted at the MNG runway show included actresses Anne Heche and Kelly Rutherford, “Bachelorette” Ali Fedotowsky and socialite and bag designer Tinsley Mortimer.

Family Ties
Dana Davis is following in her parents’ footsteps. The designer is taking styles from her eponymous line to the red carpet in honor of the 2010 Carousel of Hope Ball diabetes fundraiser. The biennial event was launched more than 30 years ago by her parents, Marvin and Barbara Davis, in recognition of their daughter’s early battle with the disease. “Carousel of Hope is very dear to my heart,” said Dana Davis, who was diagnosed at age 7. “My footwear was inspired by my own struggle, and I wanted to give back something extra this year.” Taking place on Oct. 23, the event supports the Barbara Davis Center for Childhood Diabetes through the Children’s Diabetes Foundation and has raised more than $75 million to date. Davis’ four limited-edition shoes — including the Carly, a sexy slingback heel and the Alexandra, a Mary Jane style — are available on Danadavis.com through Oct. 30.