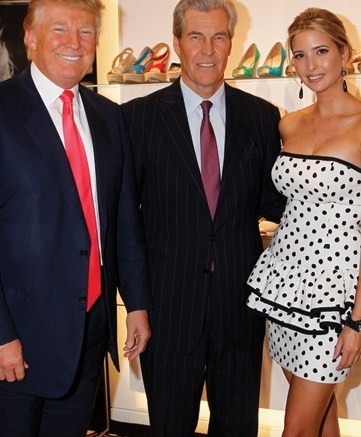 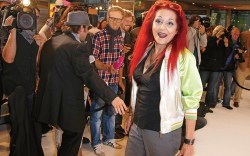 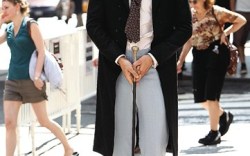 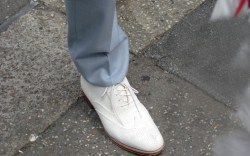 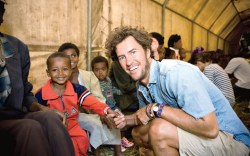 Trump Towers
For Ivanka Trump, it’s out with the old and in with the new. With the spring debut of her shoe line, produced by Marc Fisher Footwear, the businesswoman is in the process of updating her wardrobe to include only styles from her namesake collection. “I [said to] my husband, it’s a good thing we’re in real estate because we’re going to need a bigger closet,” she joked to Insider, though she remained mum on the number of styles and brands she’ll be parting with. Trump drew quite the high-powered turnout for her footwear debut party last week, with her family — including father Donald and stepmother Melania — joining the likes of Macy’s exec Terry Lundgren and Zappos.com CEO Tony Hsieh. Trump’s samples arrived at the showroom just in time for the FFANY show, and the collection spanned jewel-embellished bridal looks to beach-ready flip-flops. “I’m surprised at how large of a line it is. I like what I saw,” said Lundgren, who was personally handed a gift bag by Donald Trump as he made his exit. The Trump patriarch was a bit more gushing. “[Ivanka] has been very focused her whole life,” he said. And while the father and daughter work closely together on the real estate empire, The Donald said he has no intention of getting involved in Ivanka’s fashion business. “I wear shoes. I don’t sell them.”

Field Day
Patricia Field is no stranger to Hollywood. And now the boutique owner and costume designer — best known for her work on the “Sex and the City” franchise — may be coming soon to a television screen near you.  The celebrity stylist, who has flitted to Asia several times this summer for work on a Taipei TV series about “girls searching for rich husbands,” admitted she’s been approached on several occasions to star in her own reality show but is holding out for a different format. “Anything that requires me to be an actress, even in a loosely scripted environment, makes me uncomfortable,” she said. “It’s a matter of finding the right one. It’s always in the water.”

Manolo Mania
Ladies, behave! That seemed to be the unspoken direction being doled out by sales staff at Manolo Blahnik’s midtown Manhattan boutique during its annual sale last week. The store was flooded with shoppers snapping up the iconic designer’s stilettos and pumps for a fraction of the price tag (they typically peak somewhere around the $1,000 mark). Some determined women tried fitting into stilettos a couple sizes too small, prompting sales staff to snap, “Don’t do that! Your feet are way too big. You’ll ruin them.” Others were a little more poised, including White Mountain co-owner Peter Fong, who was spotted browsing the offering and walking out of the shop with at least one pair of shoes.

On Location
There was a crowd outside New York’s Grand Central Terminal last week, but it wasn’t a train everyone was waiting for. Instead, onlookers were trying to get a sneak peek at British comedian Russell Brand, in the Big Apple filming a remake of the 1981 film “Arthur.” Cast in the title role originally brought to the screen by Dudley Moore, Brand plays a drunken playboy with a unique fashion sense. Insider got a glimpse at Brand’s movie wardrobe, which included a top hat, tails and a pair of white brogue wingtips. While the first Arthur did his shopping at Bergdorf Goodman, it looks as though this time around he’s frequenting the vintage store circuit.

Million Mark
Blake Mycoskie is going back to where it all started. The Toms Shoes founder is zeroing in on donating its millionth pair of shoes, a milestone Mycoskie anticipates the company will hit next month. “It was inconceivable a couple of years ago, and now that we’re [there], it’s a little surreal,” he said. Mycoskie is honoring the achievement by planning a six-day trip in September to Argentina, where he first started giving away Toms footwear. “We’re really trying to not look at it as a milestone but more like an excuse to say ‘thank you,’” said Mycoskie, who will take along a group of about 20 people, including staff, retail partners and family.

Material Things
It’s no secret Taylor Momsen, who has been spotted rocking sky-high Lucite heels, has an affinity for stripper-chic style. And just days after her 17th birthday, the “Gossip Girl” star and face of Madonna and daughter Lourdes’ Material Girl line took the look to Macy’s with a rocker twist. Decked out in a cropped biker jacket, corseted top and dark pants covered by over-the-knee motorcycle boots from the line, the actress — and singer in the band The Pretty Reckless, which performed at the Macy’s debut — admitted that one of her favorite things about Madge’s collection is the footwear. “There are a lot of great pumps,” she told Insider. “And these. These [boots] are awesome.”