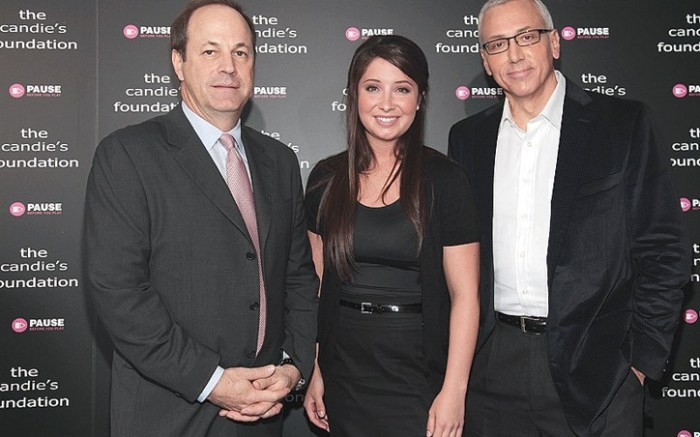 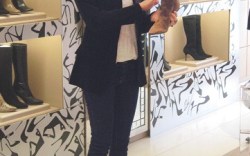 Baby Talk
Neil Cole sure knows how to get people talking. The founder of The Candie’s Foundation and CEO of Iconix Brand Group Inc. brought together a diverse group of bold-faced names — from Jay Z to Bristol Palin to Dr. Drew (at far right, with Cole and Palin) — to inform young women about the realities of teen pregnancy during a pair of events last Wednesday for the “National Day to Prevent Teenage Pregnancy.” At a daytime town-hall gathering, Insider caught up with teen mom Palin, an ambassador to the Foundation since last year, after being thrust in the spotlight during mom Sarah Palin’s presidential campaign. “I definitely think [my mom] has influenced me because she has shown me how to be confident,” she said. “I’ll take the criticism that I do receive with a smile on my face.” Later that night, a big crowd gathered at Cipriani to raise money for the foundation. “[This event] doesn’t always fall on Cinco de Mayo,” Cole joked. “We’re not drinking for teen pregnancy this evening.” British songstress Natasha Bedingfield, who performed that night before Crosby, Stills & Nash took the stage, said she was excited to be part of something that was educating people. “Sex is a lot of fun, and my industry is all about talking about how fun it is,” said the musician. “So it’s nice that there is a counterbalance with the realities.” Meanwhile, design duo Mark Badgley and James Mischka (part of Cole’s growing brand empire) dished on their vacation plans for the summer. “We take a lot of long weekends,” Badgley said. “We have a beautiful cottage out on Long Island and a horse farm in Kentucky.”

Eric Sprunk, VP of merchandising and product for the Nike brand, poked a little fun at the red-hot toning category, a product classification in which Nike has been conspicuously absent. After asking a series of “Wouldn’t it be great?” rhetorical questions designed to show off future Nike technologies, Sprunk ended with, “Wouldn’t it be great if we could make a shoe that made your butt look better, your gut smaller and would make you feel better just walking around?” he asked, before answering himself with a smile: “No. No one can make that.”

Jetsetter
Christian Louboutin doesn’t know how to slow down. After a whirlwind trip to Los Angeles, the designer swept into New York last week to attend the Metropolitan Museum’s Costume Institute gala, one of the biggest fashion events of the year. “There were a lot of women wearing my shoes. And some of them came up to me and told me they were uncomfortable!” the designer quipped to Insider during a rare quiet moment in his penthouse suite at the Maritime Hotel.

Sporting leopard-print loafers with allover studs from his own line, Louboutin gamely posed for photos for his upcoming Footwear News cover in between fielding phone calls and e-mails. And while his stateside visit was set to end last Thursday, Louboutin wasn’t heading home to Paris just yet. He planned to make a stop in Amsterdam to attend a singer friend’s show, for which he produced the shoes. “I promised,” Louboutin said.

New York Woman
Tamara Mellon was in her element last week when she hosted an intimate gathering at the brand’s swanky Madison Avenue boutique to fête the arrival of Jimmy Choo’s 24:7 boot collection. And she was full of advice, too. When asked what a woman should buy if she’s going to splurge on one pair of shoes this winter, Mellon suggested boots, either ankle height or over-the-knee. “They are so versatile. You can wear them with jeans, pencil skirts or even a cocktail dress.”

Mellon said she chose an “old school” Versace gown to accompany her new Jimmy Choo booties for the aforementioned Costume Institute gala. Other Choo fans on the red carpet were Oprah Winfrey (in custom heels), Rachel Weisz, Jessica Stam, Rachel Bilson and Tina Fey. Who wore them best? No comment from the brand’s founder, but Caroline Berthet, U.S. director of PR, knew the right thing to say: “Why, Tamara of course!”

Mellon also appreciated the entertainment at the gala, and said she was gaga for Lady Gaga: “She looked incredible in her flesh-tone jeweled bodysuit. She was jaw-droppingly beautiful, really.”

And as for her date to the event — R&B heartthrob Usher — Tamara also had nothing but good things to say. “He was the perfect gentleman,” she said. “The perfect date.”