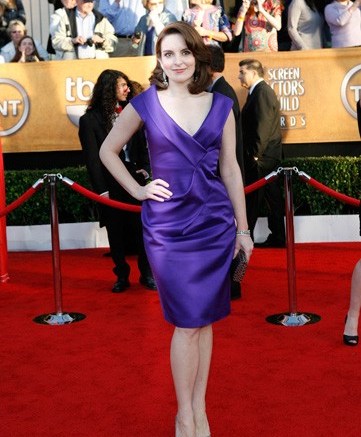 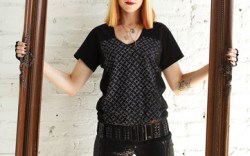 Shoe Story
Tina Fey isn’t the only thing that “Saturday Night Live” and “30 Rock” have in common. Fey (at left) and the writing and acting staff of the NBC sitcom will be receiving their very own Creative Recreation sneaks next month as their end-of-season gift. Creative Rec PR rep Julie Van Daele told Insider the brand got the nod after a producer on the show heard about the shoes it had made for SNL’s season finale. (Those had been gift from cast member Kenan Thomas.) The “30 Rock” crew will each recieve a pair of Creative Rec’s Cesario Lo XVI style screenprinted with the show’s logo. But that’s not all, Van Daele said: The reps who will be hand-delivering the kicks will come bearing one additional pair from the brand’s Essentials line for the lucky recipients. “They get to pick any pair they want [from the line],” she promised.

Sewing Kit
When her stint on “Project Runway” came to an end, stylist and designer Kit Scarbo said she swore she would never sew like that again. But after finishing up her second line with Etnies — the fall ’10 collection includes tees, hoodies and six footwear styles — she was inspired to get back in the fashion mix. “As I was working on the line, I thought, ‘I miss this,’” said Scarbo (below). So she began saving up and opened a big workspace in Los Angeles, where she developed an eponymous ready-to-wear line (although, she said, this go-round she worked with pattern makers and sample makers). Her fall collection for women debuted last week at the Etnies showroom in Soho and features dramatic draped dresses, jackets and skirts that play with transparency and shape. But while the look is high fashion, Scarbo said she brought in many of the elements from her Etnies collab. “I had never used jersey or fleece in my life,” she said, but the exposure to the fabrics inspired her to use the materials extensively. (In fact, her fall line and the Etnies footwear and apparel share a number of patterns and fabrics.) “I remembered how awesome it was to wear a hoodie, and I thought, ‘I want to be comfortable when I go out,’” she said. “This line lets you feel comfortable without looking comfortable.” The Kit Scarbo collection is priced between $250 and $650, and the designer said she is hoping to place it in boutiques such as Intermix.

Seen at Fashion Week …
Donald and Melania Trump sitting front row at Michael Kors, along with Russell Simmons and Michael Douglas. The show was delayed for the International Herald Tribune’s Suzy Menkes, but front-row fixture Cathy Horyn of The New York Times never showed … Also a no-show were celebs at Marc Jacobs. Jacobs reportedly eschewed celebrity appearances this time to ensure the focus of the show was on real, beautiful clothes for real women … Reality TV stars Olivia Palermo, Samantha Swerta and Erin Lucas were all seated front row at Badgley Mischka — Mark and James must be wild for MTV’s “The City” … Tania Spinelli congratulating Frank and his team at the Frank Tell show. The designer collaborated with the fashion house on its first collection … Rachel Zoe — with camera crew in tow — using some profane descriptors for difficult PR girls under the tents … Ruthie Davis at Dennis Basso, for whom she created edgier-than-ever spiked booties and vintageinspired pumps to accompany the designer’s luxurious fur looks.