Insider: Puma City…Carmelo in the House 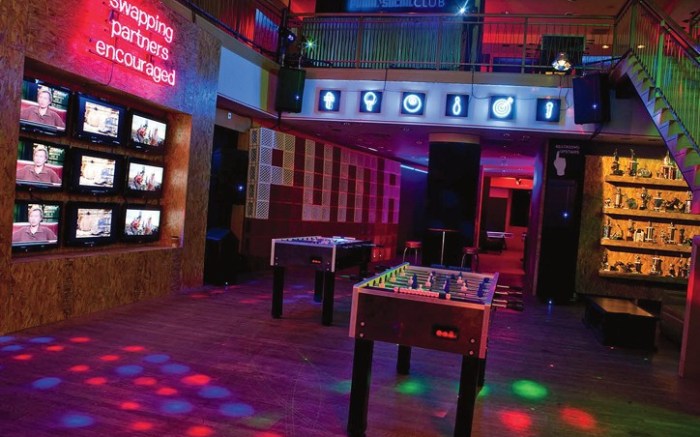 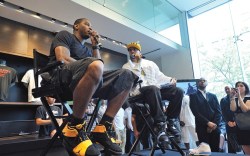 Futbol Fever
Like to watch soccer? Find yourself in New York? Then you’re in luck. The Puma City installation, which will dominate Manhattan’s South Street Seaport until July 11, is prime World Cup territory. Insider took a walkthrough of the space on opening day of the tournament, when it was thronged with the football faithful. But this isn’t like any Puma City you’ve seen before. Tara McCrae, senior director of marketing for Puma North America, said the company had “learned a lot” from its previous installation in Boston for the Volvo Ocean Race, and that the new arrangement (with smaller spaces scattered about, rather than one large unit) gave the City “more of a village feel.” So what takes place at a soccer-obsessed village? What doesn’t. There are human foosball and soccer clinics on the fenced-in pitch, ping-pong tables, a beer garden run in collaboration with Red Bar and, of course, plenty of retail space. (The footwear and apparel sold at Puma City crosses from soccer performance to lifestyle, with some Puma City exclusives.) “It’s a destination,” McCrae said. “We want people to spend the day with us.” And Puma takes “spend the day” literally. Visitors to the area can get a sneak peek at the Puma Social Club (above), a concept the brand will debut this fall. During the day, it’s a retail space that shows Puma’s World Cup-themed artwork and photos, but when the sun goes down, it converts into a bar/lounge, with chalkboard walls, bar games, “DJ Hero” and flatscreen TVs. “It’s soccer by day, party by night,” McCrae said with a smile.

Melo Out
Even in the offseason, NBA All-Star Carmelo Anthony is on. The Denver Nuggets forward recently hit the floor of House of Hoops in Harlem, N.Y., to promote the launch of the Jordan Future Sole M6. The shoes are a remixed version of Anthony’s signature Jordan M6 style, which were designed by a high school student who won the Nike Future Sole contest. So what’s it like having his line compared to the original Air Jordan series? “You can’t walk in [Jordan’s] footsteps, you can only walk behind them,” Anthony told Insider. The NBA star also tipped us off to the styling of his next signature sneaker, the M7. It will look more like a lifestyle shoe, but have performance features built in, he said.

Crazy Days
George Esquivel has always been a piece of work, but now he’s a piece of artwork as well. The designer will be featured in the fourth California Design Biennial exhibition, at the Pasadena Museum of California Art from July 18-Nov. 1. The show will feature Esquivel’s footwear craftsmanship and artisanal approach to design. But that’s just the latest in a string of good fortune for the designer, who was recently a CFDA/Vogue Fashion Fund finalist. “I can’t even tell you how crazy this past year has been,” he said. “It’s all the good craziness we’ve always wanted.” Esquivel also revealed what it’s like to work with Anna Wintour: pretty great, it seems. “I’m in awe of her,” he said. “You hear so many stories about the fashion industry being cutthroat and mean — and don’t get me wrong, she’s a tough woman — but she’s doing a lot of good. She’s looking out for the little guy.”

Tony’s Time
Tony Hsieh can now add best-selling author to his resume. The Zappos.com CEO’s book, “Delivering Happiness,” was No. 1 on yesterday’s The New York Times bestseller list in the “Advice, How-to and Miscellaneous” column. The book, released on June 7, has also generated abundant buzz for Hsieh — and his Zappos team, too. — With contributions from Gerald Flores