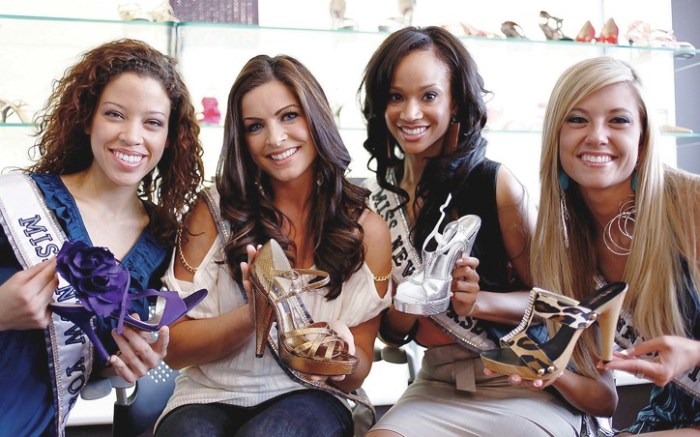 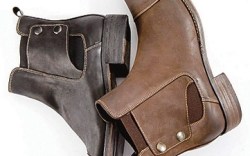 Pomp & Pageantry
It was a mad dash for stilettos last week at the Nina showroom, when the 2010 Miss USA contestants converged to pick out their shoes to wear in the competition and talk a little shop with Insider. But given the scandals that have dogged previous contestants (Carrie Prejean, anyone?), the ladies were keeping things PG. Miss Delaware, Julie Citro, who chose a silver style with crystal accents, said it doesn’t hurt to be prepared when you’re in the public eye. “Everyone should always be careful now that everything is media related, with the Internet and pictures,” she said. Citro (above, second from left) said if she goes home with the crown, her celebration plans will be family friendly, including a trip to P.F. Chang’s for lettuce wraps. And even though the competition is in Las Vegas, airing live on May 16, Ashley Bickford (Miss Connecticut, above, far left) will most likely avoid the slots. “I can’t say I’m a very good gambler. I’ll probably stick to roulette or something a little bit easier,” she said. Nina has been the official footwear sponsor of the Miss USA and Miss Universe Pageants since 2004.

Guy Stuff
Charles David will be sharing the love with dudes this fall. Following the success of the brand’s Made in Italy collection for women, which debuted this spring, the company will move ahead with a similar men’s collection (above, right) priced at $275 to $325. The collection features a range of casual and dress styles, including wingtips, saddle shoes, penny loafers, ankle boots and monk straps, and will launch at Charles David retail stores. “I designed men’s shoes for Guess when we had the license, and they were a huge success in our retail stores,” Charles David President and CEO Charles Malka told Insider. “I wanted to take a dive again into the men’s market. I was able to design the Made in Italy collection for women that is basically a unisex collection, and then tweak here and there to make it more for a man. Our customers are always shopping with their husbands or boyfriends. This gives them a chance to enjoy the Charles David Italian craft, too.”

Room Services
John Lobb is making its mark. The French shoe brand launched a partnership with the Mark Hotel last week to bring a shoeshine and refurbishment service to hotel guests. The program — already at the Montage in Beverly Hills, Calif., and the Connaught in London — is fully backed by John Lobb, which even trains hotel staff in the art of the shine and offers co-branded house shoes to wear while waiting. “Starting a hotel, you get to choose the services you want, if you can afford it,” said James Sherwin, GM of The Mark, which reopened a few months ago. “I won’t do it unless it’s the best.” Lobb isn’t the only brand jumping on the hotel train. Swedish brand Tretorn (a division of Puma) is partnering with New York’s new Ace Hotel to provide staff with waterproof product for rainy days. And in October, a special colorway of its Strala Vinter ankle boot will be available to shoppers at the hotel’s giftshop. — With contributions from Jocelyn Anderson and Kristen Henning