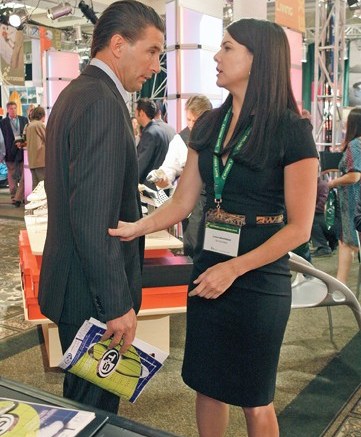 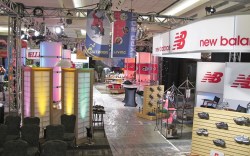 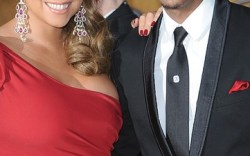 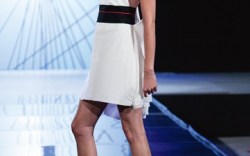 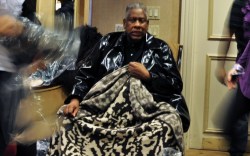 NBC’s “Parenthood” might be all about the family drama, but the folks behind the TV series know a thing or two about shoes, too. Fictional sneaker company T&S Footwear, which is loosely based on the Patagonia model, has been getting some major play in the show’s second season, with brother and sister duo Adam and Sarah Braverman (played by Peter Krause and Lauren Graham) and company owner Gordon Flint (William Baldwin, below with Graham) grappling with layoffs, new product development and prepping for the spring ’11 shoe shows. “There was a huge amount of research,” production designer Steven Jordan said about creating the Outdoor Retailer-like set that made a cameo in a recent episode. From the sprawling booths to buyers writing orders with reps, the crew certainly managed to hit a realistic chord. But, Jordan told Insider, turning a few Southern California ballrooms into a massive trade show required major foot work, not to mention four days of labor.

How familiar were you with the shoe show concept?
“[We had no knowledge] whatsoever. We literally Googled everything: trade shows, shoe shows, outdoor shows and looked at different websites to get an idea of [what’s out there]. We wanted to keep it as current as possible.”

What went into creating the show floor?
“Starting from scratch was financially impossible, [so we] called vendors like New Balance, Simple Shoes and Teva. They were all incredibly interested and sent product. Skechers is in Los Angeles, so they sent a booth and someone to set it up. We [also] rented booths and displays and designed the rest of the set and graphics in-house.”

What was the biggest challenge?
“Making it believable. The whole thing was drafted to scale before we set foot in the room, [and] we had to [use] a lot of smoke and mirrors to make the show look like it was on a grand scale.”

Any other big shoe-related sets on the horizon?
“I’ve only seen three or four episodes down the road, and there’s nothing on this scale. We’re in the throes of the Thanksgiving show, so I’ve got turkeys lined up around the studio back lot.”

Design Diva
Mariah Carey has more to worry about than becoming a mother. The songstress, who is launching a footwear line with HSN this month, is trying to make room for her ever-growing shoe collection. Carey dished to Insider that her closets in New York and Los Angeles, which have been showcased on MTV’s “Cribs,” are filled with her most treasured pairs (including a variety of YSL, Chanel and Christian Louboutin heels), displayed on glass shelves, while everything else is organized by color and style. “I definitely save my favorites,” she said. But the mother-to-be is trying to make some changes, welcoming more casual styles to her mix of towering stilettos and platform pumps, per hubby Nick Cannon’s suggestion. “My husband brought me all these flats the other day, which were gorgeous, but kind of not comfortable for me,” she said. “I can tolerate a high-heel shoe for hours on end.” And no matter what’s on her feet, Carey (above with Cannon) said welcoming a new member to the family won’t slow her down at all. “It makes me really want [to design] a maternity line.”

Walk This Way
Iman and Isaac Mizrahi are gearing up for a few catwalk battles on “The Fashion Show: Ultimate Collection” this season, and retailer Robert Yeganeh is getting in on the action. The Love My Shoes owner has been tapped by producers of the Bravo reality show, which pits two teams against each other in a runway design competition, to provide footwear for models. “Whatever the look, shoes help pull it together,” said Yeganeh, who has provided styles from Chinese Laundry, Jessica Simpson, Steve Madden, Charles David and Zigi New York to complement the aspiring designers’ looks. But, Yeganeh admitted, he has his own reasons for helping the show, which debuted its second season last week. He’s hoping his store’s indirect cameo could be a boon to business. “What you see on the runway all season are the same looks you’ll find on our shelves,” he said.

Holding Court
When it comes to shoes, Vogue contributing editor André Leon Talley has one cardinal rule: Never play Cinderella’s stepsister, especially when it involves Manolo Blahnik. “It has to fit, or you have to put it back,” Talley advised during the designer’s invite-only sample sale in New York last week. “You’re not here to buy shoes you can’t wear. This is investment shopping.” Talley, clad in a Prada jacket and an animal-print blanket, was in town to dole out footwear advice to women who could not decide between, say, leopard-print and candy-pink slingbacks. A scrunched nose was a sign of disapproval. “I try to be very honest and say if a shoe doesn’t look flattering on a foot. Women love opinions.” Talley loved sharing tips so much that his master of ceremonies role at the sale could become a recurring gig, even if he has to take a red-eye flight from California. “I love Manolo. He’s king,” Talley said, noting that the event was worth the 9 a.m. call time. “We’ve been friends forever.”

Foot Work
While he’s best known as the editor of the New York Times’ legendary crossword puzzles, Will Shortz is also a fixture on the table tennis scene. He plays most nights and is opening a ping-pong club in his hometown of Pleasantville, N.Y., so it wasn’t much of a surprise last Wednesday to see Shortz dressed in head-to-toe athletic gear — including table tennis-specific kicks — for a ping-pong tournament to benefit youth nonprofit 826NYC. “[My shoes] have thin soles, so you can stay close to the floor, but they give you good support. They’re super breathable,” Shortz said of his Joola sneakers. “A lot of [athletic] shoes have higher heels for running, but these have fairly thin heels.” Unfortunately for Shortz, the sneakers weren’t enough to defeat comedian Judah Friedlander, another table tennis fiend who favors cushy Nike crosstrainers for competition. “I could not handle his serve!” Shortz lamented after their final match.