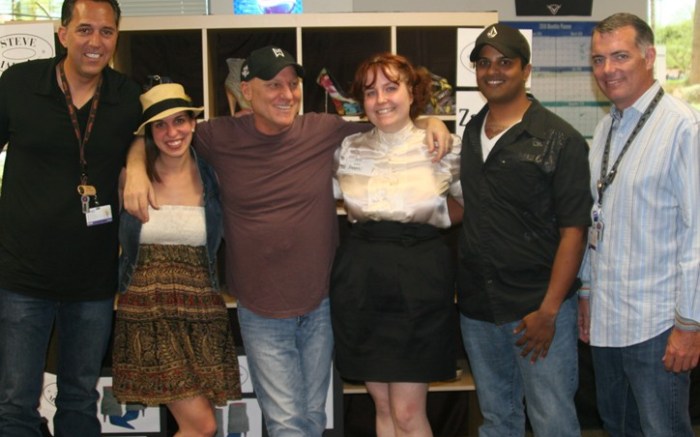 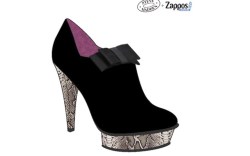 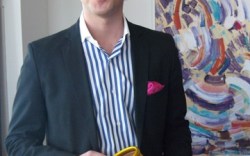 Steve’s New Shoe
And then there was one. Out of close to 4,000 submissions for the “Sole Search” competition — a joint venture of Steve Madden and Zappos.com — the three remaining finalists traveled to the Steve Madden showroom in New York last Friday to find out whose design would be produced by the Steve Madden team and sold exclusively at Zappos.com later this year. The victor? Stephanie Figuccio, who is graduating from Marist College later this month. The young designer’s winning look is a suede ankle bootie adorned with a bow on the upper and python detailing on the heel and platform. “It could be for the rock-star girl, the goddess or even [worn] to the office,” Figuccio said. “I’m obsessed with shoes because the right pair of shoes can change a girl’s attitude.”

Soccer Style
Nike continues to celebrate the upcoming World Cup tourney with an apparel and footwear collection called True Colors USA, using the artwork of legendary Los Angeles graffiti and tattoo artist Mister Cartoon. Nike (which sponsors Team USA, among others) has been fêting the collab with stops around the country, including one last week at the brand’s 21 Mercer St. location in Manhattan’s Soho neighborhood, where Insider caught up with the artist. “I wasn’t the best at soccer, but I still respect the sport,” he said, admitting to being a benchwarmer growing up. “[The collaboration is] a way for me to still be involved in the game some way.”

Daily Brew
John Fluevog is marking 40 years in 2010, and to commemorate the occasion, the brand has teamed with fellow Vancouverite J.J. Bean Coffee Roaster to create a new shoe and coffee flavor. The shoe style — a women’s T-strap christened the Tenango — has been selling well, according to marketing director Stephen Bailey, and will probably only last through the summer. Ditto on the Special Reserve Fluevog Roast of Huehuetenango, which will be available both at Fluevog stores and at J.J. Bean locations while supplies last. Bailey said this collaboration with J.J. Bean owner John Neate is the second in a row to be done with another John (the first was with John Evans and Opus Hotels). In fact, the John-centric policy has been so successful, Bailey said, the brand is considering making it permanent. “We’ll use that to determine who we work with in the future,” he joked.

Steigering Results
Just call Paul Steiger, son of designer Walter Steiger, a New Yorker. The scion of the Paris-based Swiss family makes his home these days in the Big Apple, and while he said that adapting was difficult at first, now he can’t imagine living anywhere else. Steiger hosted the luxe brand’s fall preview last week in the swanky new Walter Steiger showroom on New York’s Fifth Avenue, showing off vertiginous platform d’Orsay pumps in leopard-print ponyhair, an ankle boot with a tractor sole and a fully lined, knee-high, rabbit-fur boot. But some of the most exciting Steiger works, he said, aren’t part of the collection — they’re coming out of the brand’s new made-to-measure shop in Paris. “It is very exciting to work without the limits of commercial compromise,” Steiger said. “People come in with their own sketches, or they describe a shoe they once saw or owned. It might be ostrich feathers to accompany an evening gown, or a crocodile boot. There are no bounds to the creativity. But, of course, if we don’t like it, we don’t make it. It has to be nice.”

The ‘Peanuts’ Gang
Footwear was a hot topic at the Issues & Solutions Conference Thursday, hosted by Emanuel Weintraub Associates Inc., where guest speakers included CEO of Financo Inc. Gilbert Harrison; Iconix Brand Group Inc. CEO Neil Cole; and Nine West CEO Andrew Cohen. Cole said he was especially excited to be included in the gathering, in part because of the photo shoot he was missing. “[We’re] shooting Britney Spears today for the third time. I’m lucky I don’t have to be there,” he joked during his presentation. In addition to the company’s work with the Candie’s brand, Iconix recently the Peanuts brand to its roster, and Cole said working with the wholesome brand would be a nice change of pace. “With Britney and Madonna, you have to worry about what’s happening in the papers,” said Cole.

Going Global
Fred Allard is no stranger to a busy travel schedule. Insider managed to track down Nine West’s creative director while he prepped for his second global media tour, which kicks off May 11 in London and continues with Hong Kong and a first-time visit to Shanghai. With culture-filled spots awaiting in each city, Allard said he was looking forward to visiting Shanghai, a new destination for the frequent flier. But what was he most excited about? The World Expo (a six-month celebration that includes 20,000 cultural performances).