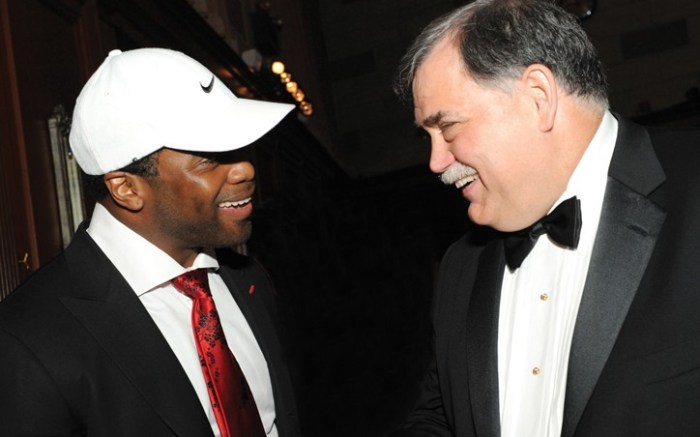 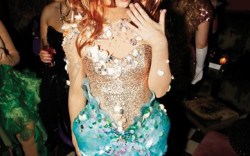 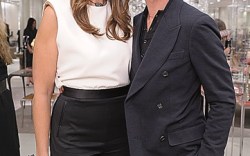 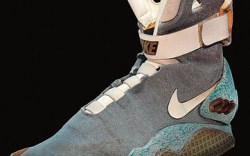 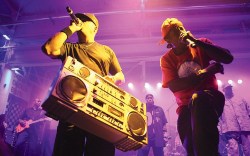 When all your top vendors are in the house, how do you choose a pair of kicks? For Ken Hicks, it was an easy decision. The Foot Locker Chairman and CEO sported Nike Air Force 1s (in the black tech turf style) at the retailer’s 10th annual “On Our Feet” gala last week. “Nike was the biggest sponsor of the event, so I had to [sport] Nike,” said Hicks (at right with legendary New York Jet Curtis Martin). “They just came out with the turf material, so I wanted to wear [the shoes].” While the fundraiser, at Gotham Hall in New York, typically attracts mostly NFL players, a few other stars, including actors Chace Crawford and Jane Krakowski, joined the crowd. Krakowski left her casual shoes at home, instead opting for nude pumps by Brian Atwood. “They’re so comfortable,” she said. But Christian Louboutin also made the cut among her favorite designers. “I’m a fan because [of] the hidden platform,” said Krakowski. “I’m short, and that’s the only way I can wear heels on set for 12 hours.”

Monster Mash
Christian Siriano loves a good excuse to play dress up. After turning heads last Halloween as Ariel from “The Little Mermaid” (boyfriend Brad Walsh went as Prince Eric), Siriano told Insider the couple is returning to the Disney theme this year. Siriano kept mum on the costumes of choice but noted that the princess look is out. “I’m not an actual human,” he hinted. “I’m kind of like an object.” To celebrate, Siriano plans to attend a party hosted by Heidi Klum, who also knows how to keep a secret. “She won’t tell anyone [her costume]. I can’t wait to see what she’s going to be,” said Siriano. Aside from planning his next over-the-top look, the designer also made time to stop by his old stomping grounds to host an episode of “Project Runway” earlier this month. But Siriano doesn’t limit his TV watching to the show that brought him fame: He’s recently been caught up in Bravo’s “Real Housewives of Beverly Hills.” “[The show] is genius. Those are real housewives, honey,” he said. “They are fabulous, and it’s hilarious. I don’t know how the producers find these women.”

Beach Bound
Bruno Frisoni is expanding his social circle. The designer is doing some globe trotting and setting up rendezvous with fans at stores like Saks Fifth Avenue, which he visited last week. “It’s like a date with new friends and new shoes,” Frisoni said (above, right with Lincoln Center’s Stephanie Winston Wolkoff). While in New York, he showed off the Roger Vivier for Saks Vintage Collection, appropriately titled Rendez-Vous. “The shoes have a sexy, light, playful purpose. They capture the Vivier spirit,” Frisoni said of the line, which features archival styles dating back to the 1950s. Other stops on the tour are Shanghai, where fresh off the fashion week trail he bowed a Vivier boutique, and Miami, where Frisoni will next help fête the Bal Harbour shop’s first birthday. But after such a hectic schedule, the designer said a little fun in the sun is certainly in order. “I’ll be at the beach,” he joked. “They may have a hard time getting me to the store.”

Great Scott!
It’s time to fast forward. One lucky fan is going to be the new owner of a piece of footwear future: a pair of Nikes, circa 2015, as seen in the movie “Back to the Future II.” The kicks, worn by Marty McFly (Michael J. Fox), will be auctioned off by Profiles in History next month. Brian Chanes, the head of consignments and acquisitions at Profiles, told Insider there are only five pairs in existence, worth an estimated $12,000 to $15,000. But Chanes anticipates this pair will bring in a much higher price, possibly more than $20,000. A portion of the proceeds will go to Team Fox, Michael J. Fox’s organization to fund Parkinson’s disease research. The bidding wars begin Nov. 6.

Hip Hop Hooray
Believe the hype: Vans has a new East Coast headquarters, and they pulled in New York hip-hop heavyweights Public Enemy to celebrate. But that wasn’t the only surprise. Brooklyn, N.Y.-born rap darling Mos Def also made the scene at the inaugural rager before ceding the stage to the headliners. “I didn’t know,” swore Vans spokesman Chris Overholser. But maybe there were clues. After Mos took the stage with zero fanfare, another Vans flack said, “Is that Mos Def? Yeah, I guess that makes sense. I heard Steve Van Doren [son of the company’s founder and VP of events and promotions] had dinner with him last night.” Earlier this month, the brand, a division of VF Corp., christened its 25,000-sq.-ft. warehouse space in Brooklyn’s Greenpoint neighborhood, which features both an indoor skate bowl and an outdoor skate plaza for its sponsored athletes and friends. Overholser added that the brand is planning to station two full-time employees in the space, who will focus on grassroots marketing.

We Are Family
Kenneth Cole’s daughter is hitting the campaign trail for her uncle, Andrew Cuomo. At a preview last week for his spring ’11 collection, the designer noted that his oldest daughter just graduated from Columbia University and is contemplating law school there next year. In the meantime, she’s getting her feet wet working on Cuomo’s campaign for the New York governor’s seat. And so far her efforts seem to be paying off. As of press time, he held a commanding lead in the pre-election polls.