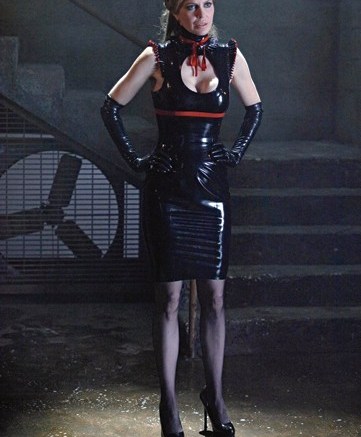 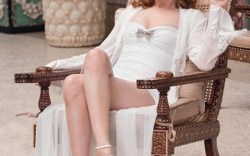 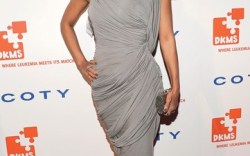 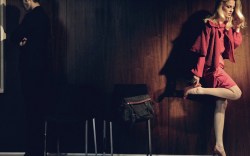 To outfit demure waitress Sookie (Anna Paquin) and her blood-sucking lover Bill (Stephen Moyer), as well as Louisiana’s vampire sheriff Eric (Alexander Skarsgård) and his fashionable progeny Pam (Kristin Bauer, at left), Fisher has staked out styles from Apepazza, Giuseppe Zanotti and just about every brand in between.

“I shop everywhere for our show, from Goodwill to Neiman Marcus,” Fisher said, ticking off Aldo, Bebe, Steve Madden, Pour La Victoire, Jeffrey Campbell, John Varvatos and Target as some of her favorite go-to brands.

“I use every resource available to me to get everyone shod well,” she said. And it looks like Fisher’s hard work has been recognized by the show’s writers.

“I became so obsessed with getting Pam the perfect hot shoe for her [ladylike] and vampy costumes that they started putting her fabulous footwear into the script, and her shoes started getting cameos.”

The men aren’t too shabby either. Who tops that list?
“Lafayette (Nelsan Ellis). He wears a lot of fashiony Timberlands and really cool kicks that coordinate with his crazy outfits, [like a pair] of candy-apple, patent high-tops.”

How tough is it to find blood-friendly footwear?
“We usually have to get the shoes appropriately ‘rubbered’ so the actor has good traction. And, of course, we often have to get multiples of the shoes because if there’s blood involved we have to be ready with a backup.”

What’s been the most memorable style?
“An incredible pair of Giuseppe Zanotti bejeweled mules with a sexy, skinny wooden stacked heel.  Lorena (Mariana Klaveno) wore [those] last season [when] she stomped on vampire Bill. Her wooden heel was like a mini-stake! That was really the only time I could buy such an expensive shoe, but it was a shoe and a weapon, so I had two budgets working in my favor.”

Show Stopper
Let the guessing game begin. News of Halle Berry’s casting in the film adaptation of “Shoe Addicts Anonymous” had fans — and footwear diehards — buzzing last week about which designer labels would grace the big screen. Insider asked co-producer Mark Bozek of Galgos Entertainment to reveal his wish list. At the top? “[Designers] known by their first names,” he hinted.

Bozek also said the costume crew would welcome newcomers. “Some will be introduced for the first time in the movie,” he said. While the producer remained hush-hush on specifics (filming is slated to begin this fall in Chicago and Michigan), Insider is betting on seeing styles from the likes of Christian Louboutin, Manolo Blahnik, Jimmy Choo and Giuseppe Zanotti. And at least one up-and-coming designer is ready to jump in. Jerome Rousseau told Insider, “I love the idea of a printed shoe for Halle Berry. Perhaps an abstract, animal print in unusual but chic colors.”

Storyteller
Nathalie Marciano is lending her storytelling skills to Charles David. Since returning to the company as creative director three weeks ago, Marciano — daughter of Charles David CEO Charles Malka — has turned to Hollywood for cues on developing the brand message. “My goal is to give [the brand] the cachet we had before,” said Marciano, who left the shoe biz nine years ago to form her production company, 26 Film. “As in film, it’s about giving yourself a presence with a story.” The newest ads — debuting this fall — tell an angst-filled story of relationships, with the Charles David collection playing a major role. Marciano said the company would increase its print placements, as well as conducting outdoor and viral campaigns. But will she return to the drafting table for Charles David? “I’ll have to see how it goes,” said Marciano, who is still at the helm of her production firm. “I still doodle all the time [and] am definitely inspired to design.”

G-Rated
“Yo Gabba Gabba!” isn’t just for kids. At least, not if you’re famous. Rumors of a new children’s line of Vans sneakers featuring characters from the Nickelodeon sensation were confirmed at Comic Con recently, and now Insider has heard that a small batch — 100 pairs — has been created for grown-ups. A Vans source dished that the limited offering will go to lucky (and, um, famous) Gabba fans, including Brad Pitt (who dressed as the show’s DJ Lance Rock last Halloween), Jason Bateman and two-time Gabba guest Jack Black.