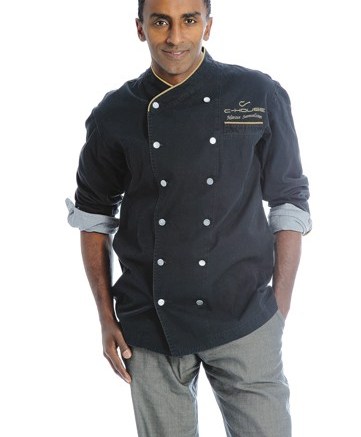 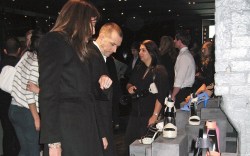 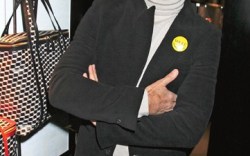 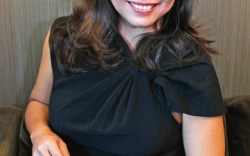 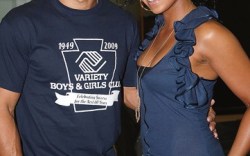 Cook Wear
Celebrity chefs are cooking up more than just their favorite dishes. Starting in March, Deckers Outdoor Corp.’s Mozo brand is collaborating with culinary stars on its new Signature Chefs shoe collection. Chefs Marcus Samuelsson, winner of Bravo’s recent “Top Chef Masters,” The Food Network’s Chris Cosentino and Aarón Sánchez of “Chefs vs. City” will put their own spin on a classic restaurant-ready slip-on for the duty footwear brand. “I need to look good,” said Samuelsson (at right), noting that he spends a fair amount of time mingling with foodies and needs to strike a balance between comfort and style. “Part of the time I’m in the kitchen, then I’ll [be in the dining room].” His look? A solid black shoe with a checkered lining — a popular pattern for traditional chef’s pants. “It’s a classic [look],” said Samuelsson, who is partowner of New York’s Aquavit and is opening Red Rooster in Harlem this month. But it wasn’t all about classic prints. Samuelsson also turned to cookwear for inspiration, weaving copper accents into his design.

Bonjour, New York
Welcome to the neighborhood, Pierre Hardy. The French designer toasted his first U.S. store on Jane Street in New York last week at an inviteonly event. After working on the shop for a year and a half, Hardy couldn’t hide his excitement about finally opening the doors. “The minute I stepped off the plane in New York, it was the best feeling,” he told Insider. “The store was still empty, but it was finished. It was real.” But Hardy isn’t done showing New York love just yet. Instead of waiting until the Paris collections, Hardy will debut his fall line shortly after the New Year in New York, a first for the designer.

Judge Taryn
Comfort shoe queen Taryn Rose is ready to hand over her crown, but not her title. Rose will put her fashion knowledge to use as one of seven judges during the Miss America pageant in Las Vegas on Jan. 15. But she isn’t focusing just on beauty and poise. “[It’s] also about talent and community service,” said Rose, who also flew to Vietnam in 2007 to judge the Miss Universe contest. “It recognizes women can be well-rounded.” And like any member of the pageant world, Rose (above) has already made her outfit choice for the big day: a red Yves Saint Laurent gown and high-heel sandals from her namesake line. Joining her at the judge’s table: comedian Joy Behar, “Desperate Housewives” creator Marc Cherry and actress Mary Lou Henner.

Special Sparkle
R&B songstress Ashanti has returned to her old stomping grounds. After winning her first talent show at the Boys & Girls Club when she was 12, the singer has come full circle by returning to participate in Ugg’s Art & Sole program. Ashanti, along with fellow alum Mario Lopez (above at a Boys & Girls Club event in August) and 25 children in the club’s fine arts program, decorated sheepskin boots with colorful paints, crystals and glitter. “I like sparkly things,” she said of her look (at right). Turns out the glitz was a tribute to designer and pal Giuseppe Zanotti, who collaborated with Ugg for last year’s program. “I am inspired by Giuseppe and the stones he uses,” she said, adding that he gave her an exclusive pair of open-toe booties when she paid a visit to his New York showroom over the summer. “I love his shoes.”

About Face
Jim Issler is leading the charge in China, at least when it comes to philanthropy. The H.H. Brown chief rallied companies both here and in Asia for the sixth annual Footwear Association Charity Event (F.A.C.E.), which was held recently in Shanghai to raise money for children’s charities in the country. In addition to H.H. Brown, top sponsors included BBC International and Chinese firms Daphne, Everest Shoe Ltd. and Kimo, as well as 100 other footwear firms. “It’s all about giving back to a country that enables our industry to be successful,” said Issler, F.A.C.E. president. This year, the event raised $1.3 million for children’s organizations, most notably the Harvard School of Public Health’s China Initiative, which trains doctors to work in the country. Through the years, F.A.C.E. has provided funding for 120 Harvard students. Among the other major beneficiaries is The Soong Ching Ling Foundation, the country’s oldest children’s charity, as well as several other foundations. Over the last five years, F.A.C.E. has brought in more than $6 million, which Issler said has helped the footwear industry build a solid rapport with the country’s leaders. He said, “We want to let the government know that [U.S. footwear companies] are good people.” The fundraiser drew several Chinese stars, including singer Johnny Jiang, actor and director Zhang Guoli and Emmy Award-winning TV personality Yue-Sai Kan (above with Issler).

Show Girls
Marlo Thomas brought a little warmth to New York last week, reading stories to kids at Brooks Brothers’ Fifth Annual Holiday Celebration (above) to benefit St. Jude Children’s Research Hospital. Still, the actress admitted to Insider, she wants to escape the cold. “I’ll be spending Christmas Day with my family, then I’m heading to Barbados,” she said, laughing. Though she plans to pack flip-flops and strappy sandals in black and silver for the trip, Thomas will keep it simple. “To be honest, I’ll be barefoot for most of the week.”

But going without shoes is hardly an option for the Broadway cast of “Billy Elliot,” which treated guests to a mini-performance during the event. Tony nominee Emily Skinner — who joined the show in October — looked preppy-chic on-stage in Brooks Brothers’ suede, gray pumps. But when not singing and dancing in eight weekly performances, Skinner tries to give her feet a rest. “I wear gold, crazy shoes in the show, so when I’m not working I go for comfort,” she said, listing Nike Shox as a favorite.