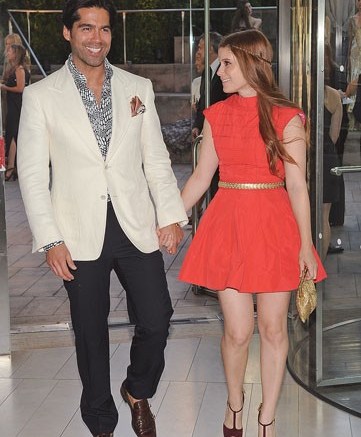 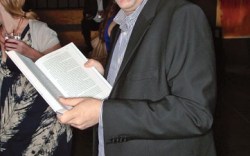 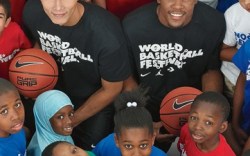 Award Winning
It was a glitz fest at last week’s Council of Fashion Designers of America Awards, with footwear insiders mingling with a sea of A-list celebrities, including Gwyneth Paltrow, David Bowie and Isabella Rossellini.

Brian Atwood hit the cocktail hour with actress Kate Mara (both at right) and dished with Insider about his plans post-Bally. “There are some collaborations in the works and some big news [coming],” he said. But, alas, Atwood was keeping mum on the details until everything has been signed and sealed. “Give me a month or two.”

While Atwood’s designs have become a red-carpet favorite in recent years, Toms Shoes founder Blake Mycoskie said he doesn’t think he’ll be joining those ranks anytime soon. “It might be a bit of a stretch,” Mycoskie said, imagining one of his brand’s colorful canvas wedges on the red carpet. “But maybe we could [create a sexy] one-off. You never know.”

Tamara Mellon, chief creative officer at Jimmy Choo, also mused about branching out. “Men are coming in and buying the [women’s] sneakers in larger sizes,” said Mellon, who hit the awards in black stilettos with thick ankle cuffs. “There’s a crossover, so you never know [what could be next for us].”

Though luxe footwear brands, from YSL to Balenciaga, were spotted at the Lincoln Center event, footwear designer Christian Louboutin reigned supreme, with his heels showing up on presenter Brooke Shields and attendees Rachel Weisz and Molly Sims. Noted Nine West’s Fred Allard, who attended the awards for the first time: “I’m seeing a lot of Louboutin. There are certainly some amazing looks.”

Top CFDA awards that night went to Rag & Bone duo Marcus Wainwright and David Neville for Menswear Designer of the Year and Marc Jacobs for Womenswear Designer of the Year. Alexander Wang took home one of the Swarovski Awards, which honor emerging talent, for his work in accessory design. And though Wang’s hot Alla leopard-print wedge, which sold out across the globe, surely helped secure the win, the designer said he’s only looking forward. “I try not to think about it as pressure,” he told Insider. “If you do that, it’s an end block.”

Good Fortune
Despite torrential downpours, Fortune Footwear went all out for its 25th anniversary bash last Wednesday at the Empire Hotel rooftop (which, thankfully, was covered). But the company might soon have more to celebrate: The firm is rumored to be close to a footwear deal with superstar songstress Mariah Carey, as well as “Dancing with the Stars” pro Cheryl Burke.

Merry Christmas, Mr. Madden
Caroling, reindeer antlers and cozy fireplaces made for holiday cheer last week as the YP for 210 group celebrated Steve Madden’s 20 years in the shoe biz — but only if you could find the venue, a genuine but hidden New York speakeasy called The Back Room. Santa’s (or at least, Two Ten’s) gift for Madden? A crisp white baseball cap to replace his well-worn Syracuse University and Dave’s Quality Meat hats.

Naming Names
Tony Hsieh was excited — as certainly befits a newly published author with a best-selling book — at the Hudson Hotel launch party last week for his tome “Delivering Happiness.” But he wasn’t as excited as Rob Schmertz [at left]. The brand director for Steve Madden grabbed a copy of the book to show Insider his name (on page 198), before giving it to a passing stranger and telling her to read it. And when told he had missed seeing Ivanka Trump earlier at the party, Schmertz bemoaned the missed opportunity. “I would have shown her my name, too,” he said.

Fashion Forward
Stylist Robert Verdi was in full-on hosting mode last week at Mandee’s 14th Street location in Manhattan to celebrate the launch of the fast-fashion retailer’s new store design, but he took some time to give Insider the scoop on his summer dislikes (Capri pants: “Hate them”) and loves (“Anything with a tuxedo ruffle”). Also on the like list? New client Bethenny Frankel of “The Real Housewives of New York” and longtime client Eva Longoria, who, Verdi said, could probably have her own line some day. “She’s a fashion girl,” he said. “She looks amazing in everything.”

Retail Route
CeCe Chin was celebrating the five-year anniversary of her 80%20 brand last week, but don’t expect the traditional gifts of wood, unless it’s a two-by-four being used in construction. Chin said she’s planning to open a retail shop/workspace in New York by April 2011.

Hoop Dreams
Forget the World Cup. By August, Nike Inc. will be over it and ready to hit the courts. The Beaverton, Ore., company announced last week it would host the first World Basketball Festival, to be held in the Big Apple Aug. 12-15. The event, which will celebrate the growing global face of basketball (and yes, the Nike, Jordan and Converse brands) with games and concerts in Rucker Park and Times Square, culminating in exhibition games between the U.S. and France, and China and Puerto Rico in Madison Square Garden. So what does Nike brand prez Charlie Denson think about the suggestion that basketball’s luster in the U.S. has faded a bit? “It goes in cycles, always,” he said. And while people might romanticize the era of Michael Jordan, Larry Bird or Magic Johnson, he noted, “today the U.S. has the deepest portfolio of talent and personality we’ve ever seen. Basketball’s coming back.”

Hip Hopping
Harbor Footwear Group certainly made the most of its time in New York last week. The Port Harbor, N.Y.-based company spent Thursday and Friday trekking across the boroughs to shoot the fall campaign for its G.H. Bass brand. Harbor director of marketing Barry Specht said his team had to move fast to get into the September issues of fashion mags GQ and Lucky, and hopes the youthful ads, which focus on Bass’ hot-again Weejuns and saddle shoes, will capture the brand’s trendy appeal. “In the past, Bass was very Nantuckety,” said Specht. “Now we’re trying to take it downtown and make it more hipster-chic.”

Media Players
Speaking of Dave’s Quality Meat, owner Dave Ortiz can now add modeling to his resume. The sneaker connoisseur was tapped by K-Swiss for a new marketing series called “Players Know” that highlights a group of real-life tastemakers. K-Swiss EVP David Nichols said this was just the beginning of some cool cameos. “We’ll do a ‘Players Know’ [shoot] in California next, and then maybe take it around the world,” he said. The New York image, now in the June/July issue of Complex, is based on a 1980s ad featuring a group of tennis fans, including a blonde with a striking resemblance to Goldie Hawn. Could it be her? “We have no idea,” said Nichols. “We lost all our records from back then.”