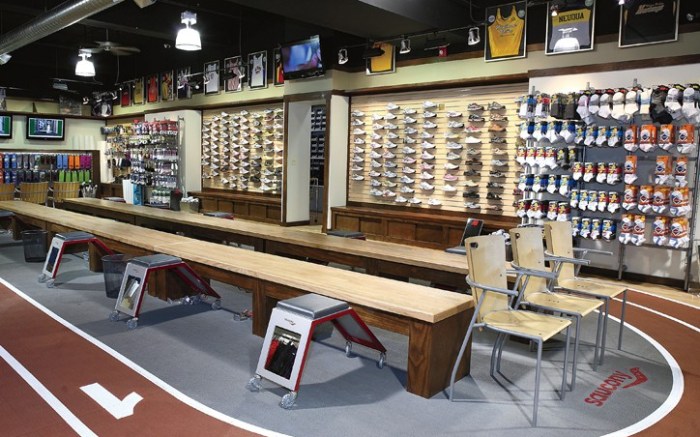 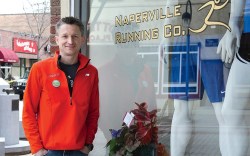 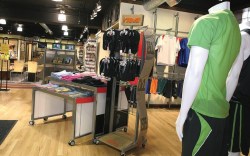 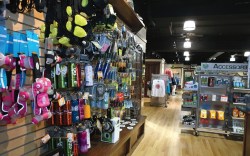 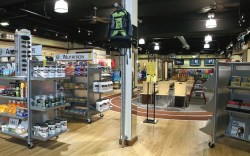 NAPERVILLE, Ill. — Some retailers celebrate anniversaries with sales, others with cake. Kris Hartner is marking 10 years in a much grander way.

Last month, the owner of Naperville Running Co. in the Chicago suburb Naperville, Ill., relocated the store to a larger, more prominent location down the street from the old store, a move he predicts will help grow business by 10 percent to 15 percent in 2010.

The unveiling of the new space follows a memorable 2009, when Hartner and his team were named “Small Business of the Year” by the Naperville Chamber of Commerce, and “Running Store of the Year” by Competitor Magazine and Formula 4 Media.

Those accolades, combined with consumer excitement about the opening, have helped the new store get off to a strong start.

“We pulled all our April and March business into the first three weeks of March,” Hartner said, adding that the sales have not slowed. “It’s so busy [right now] that we’re doing a take-a-number thing.”

The new location — inside a 94-year-old space built by the Masons — has huge windows that look out onto a busy downtown street.

But it wasn’t just the façade that was attractive.

The store — spanning 5,550 square feet, 3,000 of which are retail — is double the size of the former shop, giving Hartner the room to expand his footwear and apparel selection. “[In the past], some of these things had to be squeezed,” Hartner said, looking at the extensive shoe wall, which previously could hold only one colorway of each style.

To develop the space, Hartner and local architecture firm Joseph P. Drendel & Associates crafted an ambitious, $250,000 plan that called for a 64-foot-long shoe wall, as well as dedicated areas for sports bras and men’s apparel, an expanded women’s apparel space, three dressing rooms and, as a showpiece, a two-lane 40-foot indoor track with a try-on and kids’ play area in the center. Gym-style, all-glass lights are suspended from the ceiling. Hartner, a self-described “light freak,” had them installed as a sort of present to himself.

The expanded location also includes a meeting area that accommodates 80 people for clinics, signings and events. Other new additions include an employee breakroom, a kitchen and two bathrooms, one with a shower for employees who bike or run to work. In the new space, the two treadmills that had been tucked in the back of the store will get more prominent placement, and consumers can see their gait analysis on new 40-inch LCD flatscreens. Also, the Aetrex foot scanner that had been consigned to the basement now will be on the sales floor.

Another perk: There’s room for all the inventory in the back of the store, meaning the 19 employees don’t have to run up and down a narrow staircase for deliveries and to fetch sizes.

The new location also reflects Hartner’s strong vendor relationships. For instance, the track was installed and paid for by Lexington, Mass.-based Saucony and bears that brand’s logo. Fred Doyle, VP of market development for the run specialty channel for Saucony, said partnering with Naperville Running Co. was a no-brainer. “[Hartner’s] got a great stage now. The other store was a nice store, but the opportunity to move and upgrade the experience for the customer is going to make a good business even better,” he said. “He’s got the pulse of the running community. He’s a runner, he lives and breathes the sport, and the passion he has for running translates to the passion he has for his business.”

Other brands seem to agree, pitching in on the new store in a big way. Nike installed an apparel concept shop-in-shop and built displays for one of the front windows. Under Armour contributed apparel racks, Asics created a community board, and Brooks framed the local high school and college jerseys that had hung in the old shop.

New Balance played a key role, as well, sending postcards to the 22,000 runners on Hartner’s mailing list. (The 9,000 names on the frequently refreshed e-mail list got notices, too.)

A lifelong athlete, Hartner laid the groundwork for Naperville Running Co. by working at the now-shuttered GBS Sports running store in Minneapolis during high school and college.

After earning a master’s degree in biomechanics from St. Cloud State University, Hartner spent the next nine years at Reebok and Adidas, as a tech rep, account rep, district manager and sales manager and product manager for advance concepts. Those jobs brought him to Naperville, an affluent suburb with a large population of running buffs. In 1999, he started asking his contacts in the business about the possibility of opening a store himself.

“I’ve wanted to open a store since the eighth grade,” said Hartner. And he can prove it: Hanging behind the cash desk is a framed business card for “The Complete Runner,” the print-shop handiwork of a younger Hartner.

After taking a job with Keds to avoid any conflict of interest, Hartner launched Naperville Running Co. in 2000 with a one-year timeframe. “I told my wife, if it’s not working after one year, I’ll have no regrets closing it. I wasn’t going to pour the money into the store,” he said.

But the numbers have been promising: Footwear sales have risen each year since the store’s opening, with overall sales growing almost every year from 2000 to 2008. The shop carries Adidas, Brooks, Asics, New Balance, Nike, Pearl Izumi, Saucony, Newton and Vibram, as well as sandals from Keen, Teva and Merrell. Hartner said the new space will let the store expand its casual offering and add back brands such as Chaco that got “squeezed.” It also will grow the trail-running categories, as well as its selection of jogging strollers that appeal to his thirty- and fortysomething clientele.

Though Hartner would not give exact sales figures, he said Naperville Running Co. does a solid “double what the average store does.” (According to the Independent Running Retailers Association, the average running store brought in about $900,000 in sales in 2009.) Still, the store wasn’t immune to the down economy: Sales were flat for 2009, although Hartner had planned 20 percent down.

Going forward, the retailer said he has no plans to expand the business, even if rents in the area are reasonable. “This is a one-store model. I’m not interested in doing more,” he said.

But that doesn’t mean there isn’t room for growth. The store recently invested $20,000 in a revamped Website (and corresponding iPhone app), doubling the number of unique visitors to the site. And Hartner said e-commerce is something the company is planning for fall.

In the meantime, he said, he and his team are keeping their heads down and enjoying the new rush of traffic. “It’s really functioning,” he said. “We just try not to get too big for our britches.”