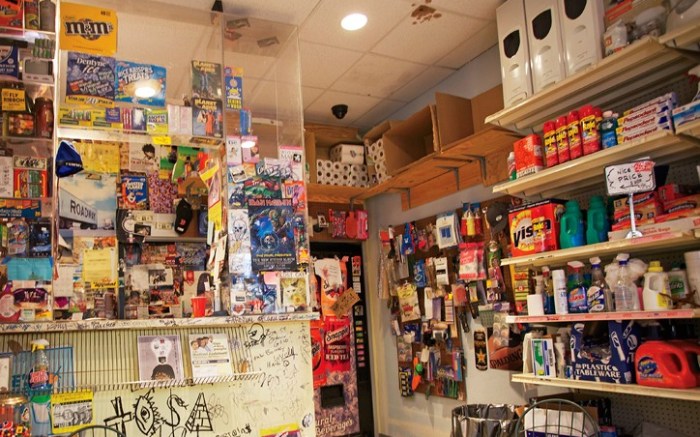 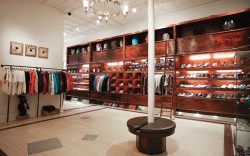 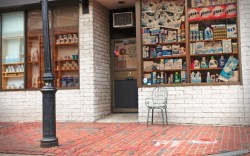 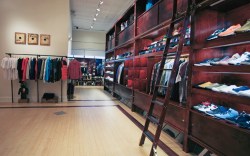 Boston sneaker boutique Bodega started with a unique business plan: virtually no marketing or signage and a hidden façade. But not everyone thought that was a recipe for success.

“My father called me a moron on more than one occasion,” said Jay Gordon, who co-owns the store with friends Oliver Mak and Dan Natola.

But as the specialty boutique reaches its fifth year this spring, the Bodega concept has enlivened Boston’s retail scene. Now, the shop is branching into private-label footwear, right on the heels of launching e-commerce in October.

The 1,300-sq.-ft. footwear and apparel shop is rooted in the concept that it’s not a fashion retailer at all. The location features a functional — though faux — storefront that suggests a shop that sells soft drinks, snacks, paper goods and cleaning supplies, similar to any neighborhood convenience store, or “bodega,” as they’re often called in many Hispanic areas.

Gordon, along with Mak, comes from the world of advertising, said he saw an opportunity to add some sparkle to the sneaker shop image.

“We wanted something that fit in and was sort of invisible in the neighborhood,” said Gordon. “Every day, probably 30 percent of the people who come in have never been here before. You just see people grinning ear to ear, so excited, with this sense of wonder. You can see the little kid in people, and it’s a lot of fun.”

Just inside the front door, a vending machine hides the entrance to the actual store. But when visitors step on a floor tile, the cover slides to the side, revealing Bodega’s sleek, spare interior, where footwear, accessories and apparel are displayed on heavy wood shelving and industrial-style metal rods.

The shop hosts an array of marquee brand names, such as Adidas, Nike, Puma, Rockport and Vans, as well as harder-to-find labels like Clae and Yuketen. And while exclusive looks are important to the store, Gordon said customers come in to buy mass sellers, too. “We’re a tier-zero Nike account,” he said. “We get access to product that is very limited, but we still sell Dunks and Air Maxes and more general product way more than we sell the exclusive product.”

The store’s unique design, as well as its merchandise selection, has attracted a wide range of consumers, said Gordon. “Of course, if they’re in their 60s and 70s, they’re pretty damn cool,” he said. “But we get everybody — doctors, lawyers, creative people in Boston. It’s a bit of everyone.”

Since the store opened in 2006, its buying strategy has shifted, Gordon said. Initially, Bodega was more of a traditional specialty sneaker boutique, but today, the product assortment includes more casual and street styles, especially boots. “Sneakers are still the cornerstone, but we definitely have a lot more boots than we used to,” Gordon said. “[Our product mix] is more grownup.”

Gordon said the economy also changed the way the store operates. In 2006, the average selling price for footwear was about $130. Today, it’s about $80. However, as word of mouth has spread, rising popularity has helped boost volume. “We’re doing a lot more sales to get to the same number, but we’re there,” he said.

From 2006 to 2007, Bodega’s sales doubled each month, and in 2007 and 2008, revenue increased by another 45 percent. When the economy crashed, though, Gordon said the store certainly felt the sting as sales dipped. But this year has brought a swift turnaround. “We’re back to our top numbers from 2008, plus a little bit,” he said. “We’ve come back strong, and we’re in better shape than we’ve ever been.”

Late in October, the company launched its e-commerce website, featuring select styles, and already the site is expanding the store’s customer reach. “We’re putting [online] some small brands that are very hard to find, and we’re getting mostly international orders,” Gordon said. “It’s been great so far, and we really haven’t pushed it yet. Our business model is more about letting people discover it rather than push it down their throats. So we’ve done pretty much the same thing with the website.”

In February, the store will debut its first private-label shoe — a boot — under the Bodega banner. “We’ve done a lot of collaborations on shoes with Nike and Adidas and Puma and everyone else,” Gordon said. “This is our first try by ourselves.”

Curtis Charles, SVP of sales for Puma North America, said the store has earned its place among America’s top sneaker shops. “Bodega’s concept is completely unique, and the novelty shows no signs of wearing off,” he said. “Since opening, Oliver, Jay and Dan have stayed true to their vision, and the way they present themselves has brought Bodega into the upper echelon of the top sneaker boutiques around the world. For anyone who cares about sneakers, Bodega is a must-stop when they come to Boston. As a brand, Puma loves to align itself with innovative partners who mix up the industry like Bodega.”

Added Henry Cosio, VP of U.S. wholesale at Vans: “Bodega has been one of our most influential accounts on the East Coast for several years now. … [They] have built a solid team and created a very unique story, as the bodega theme is combined with a really nice product presentation.”

In the coming year, Gordon said he’ll focus on improving the Bodega apparel line, which has been a private-label offering almost since the beginning, as well as the new Bodega shoe. He’ll also continue to consult with footwear brands and consumer goods companies, including the Saucony Elite line, which launched in Japan in April. For that collection, Gordon and Mak worked on all aspects of the product introduction, including design, packaging, distribution and sales.