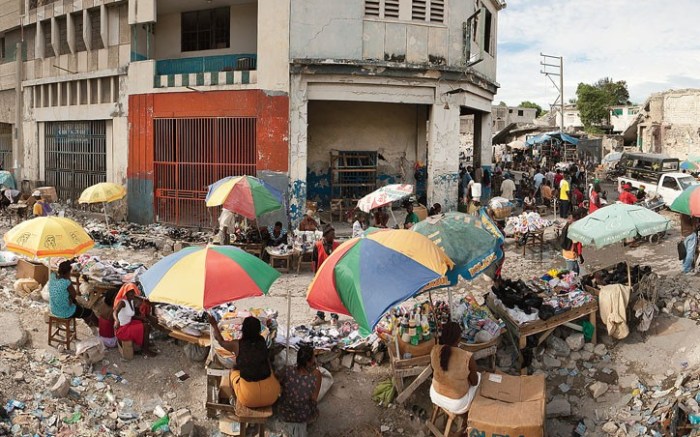 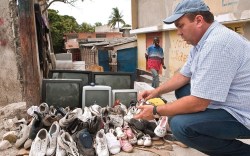 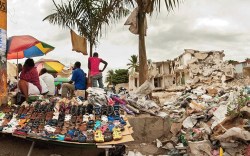 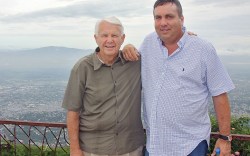 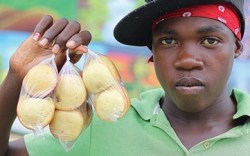 They are running. They are shouting in Creole. They are angry their government isn’t doing more to help them after a massive earthquake leveled the country in January.

Then, as quickly as they appeared, the crowds vanish into the chaotic Champ de Mars, a park once known for its manicured lawns and historical monuments but that has since become a tent city, a collection of 35,000 improvised homes made from tree branches, plastic tarps and scrap metal.

It’s late May, and the evening’s civil unrest is a jarring welcome to Haiti for Wayne Elsey, who is here for the first time in the nation’s capital with staffers from Soles4Souls, the shoe charity he founded in 2005, and this reporter. Also along are members of Assist International, a humanitarian organization that constructs orphanages and supplies medical equipment.

Executives from both groups are using their four-day visit to assess the damage and see what kind of aid is still needed. Then they will begin to implement long-range plans to help the island rebuild following the powerful 7.0 quake that killed more than 220,000 people and left millions homeless.

Tensions are rising. Despite all the disaster relief efforts — and the billions of dollars in foreign aid — many Haitians interviewed by Footwear News said the situation is getting worse.

Residents complain that there isn’t a clear strategy for exiting the makeshift tent communities; nor is there anywhere to go for jobs that will let them earn enough to feed their families. What’s more, most locals say they fear what’s coming: the rainy season.

“I’m very worried about the hurricanes,” says Silme Lubim, 25, who moved into a tent with six relatives after his house fell in La Plaine. “But the government is not doing anything. So what can I do? What can you do to prevent it? Nothing. I’m just trying to find food and purified water. That’s the way of life now — wake up and survive.”

For the most part, people still live next to sewage-covered roads and ravines overflowing with garbage and human feces. The summer’s heavy floods are poised to wash the waste from tent to tent, setting up a lethal scenario for water- and insect-borne diseases to flourish.

For Elsey, a large jovial figure with just a high school degree, it is now a race against time. He believes the quality of life can be dramatically improved in Haiti by distributing millions of shoes — a combination of new product collected from manufacturers and gently worn pairs donated by individuals — to help protect people’s feet. The Soles4Souls chief also hopes to spark commerce by enabling locals with street-side shoe stores, or “micro-businesses,” as he likes to call them. And Elsey is hatching plans to offer more durable housing.

“Being down here has validated the fact that we need to be quicker, stronger and better with our initiatives,” he says. “We’re seeing a lot of insanity and inhumanity. It’s really sad.”

Under the bright-blue sky, our van travels west of the capital to Léogâne, one of the towns hit hardest by the earthquake.

The ride is taking longer than it should. A number of roads and bridges were destroyed, limiting the ability to travel. And those routes that are left have enough potholes and piles of rubble to challenge even the most experienced drivers.

Along the way, Elsey looks out the window, wincing with each foul stench that seeps in from the food stands lining the streets. Sometimes, it stinks from fish that’s been sitting in the sun. Other times, it reeks from rotten produce.

In Léogâne, almost every building is razed. People have set up camps in sugar cane fields and gardens, places they once relied on to scratch out a living.

The vehicle stops at an orphanage, where children are resting under USAID-supplied plastic sheeting. It offers a small amount of shade just outside their dwelling, a tin structure with 16 rows of beds stacked by three up to the ceiling. The kids are barefoot, with thin limbs jutting out of ripped clothes. Many have never worn shoes.

John Chew, an American who speaks several languages and lived in Haiti for a decade, works as a field officer for Assist International. He has been here — and to loads of other orphanages — before, largely working with faith-based missionaries. Chew, a soft-spoken man with a gentle manner, tells the people who run the orphanage that free shoes will be provided.

Within minutes, a metal basin with clean water appears. One after another, the children step in. Soon the water turns dark brown. Elsey and the group keep washing their feet, drying them off and then placing on a new pair of shoes. The children smile. Elsey tears up.

“There is no excuse for people to live like this,” he says. “It is months after the earthquake. These are the forgotten kids out here.”

The sun sleeps beneath the Haitian horizon, but Elsey has been up for hours, working his phone.

It’s the third day in Haiti, and he’s raring to distribute more product, but there’s a major problem: A container filled with thousands of sneakers, casual shoes and sandals is stuck in government customs.

Dressed in jeans, a button-down short-sleeve shirt and a denim baseball cap emblazoned with the Soles4Souls logo, Elsey is trying to figure out what it will take to get the shoes cleared.

Corruption — and bureaucracy — is a fact of life in Haiti, and Elsey and the others know this, though they won’t comment on it publicly because it could jeopardize future relief work.

Ten weeks before the trip, Soles4Souls sent two giant shipping containers filled with donated merchandise. The charity tracked the goods each day as the containers headed toward Haiti. Elsey, who is based in Nashville, Tenn., received weekly status updates and was assured the inventory would obtain government approval before the group arrived in late May.

This setback is a new one for Soles4Souls, which partners with Operation Blessing, a disaster relief group specializing in shipping and distributing product in impoverished areas.

In fact, since the Jan. 12 quake, the nonprofit has had good luck in Haiti. Immediately after the Caribbean country was decimated, the group collaborated with other organizations to send two-dozen containers of emergency supplies, consisting of food, bottled water, tents and, of course, shoes.

So far, Soles4Souls has successfully shipped 600,000 pairs to Haiti. And Elsey has promised to deliver a total of 1.3 million by year-end.

But here in Port-au-Prince, the customs process is becoming harder to navigate. The large container still sits idle. It becomes clear the group will have to fork over $600 in so-called expediting fees to retrieve the 4,000 pairs of shoes.

“The corruption is becoming unimaginable,” says one Haitian woman, who requested anonymity because she works for the U.S. government and feared losing her job. “It’s slowing things down and hurting our own people. If they know you can pay, they will keep upping the amount it costs to get your containers. And they will hold your items until an appropriate import tax is paid, as well as increase the fees for storage and processing.”

No wonder that some groups are scaling back on bringing in relief items. For instance, Royal Caribbean Cruises Ltd. has used its own ships to transport more than 3,000 pallets of supplies to Haiti during its regular stops at the Labadee port. And it was willing to carry a container per week for Soles4Souls.

But shortly after their agreement, the cruise company backed out. “In the last month, we were coming up against risks we weren’t comfortable with, such as having to move large amounts of goods over horrific road conditions, potential mudslides on roads, and roads getting blocked,” says Lauren Ordway, relief logistics coordinator for Royal Caribbean Cruises. “And there were security concerns. We were moving large amounts of supplies from our site to Cap-Haitien, also in the northern part of Haiti, and people knew we were doing that. Customs never really affected us, but it was definitely looming.”

It’s been several hours now, and Elsey is hoping for good news about the container. No dice. He is told it will not be granted approval in the next few days, meaning the CEO will have to return to Haiti. (He made another trip on June 13 and within 48 hours gave away all 4,000 pairs — which included brands such as Adidas, Puma, Teva and See Kai Run — to orphanages and people in tent cities.)

Despite the delay, Elsey is remaining remarkably calm and insists on moving ahead.

The next destination: Delmas, where traditional brick-and-mortar stores still exist. But the real retail action is on the street.

On the way there, Elsey divulges his vision for Soles4Souls. He believes the organization could be a $1 billion charity by 2015, up from $72 million by the end of this year. To get there, Elsey is counting on the newly launched Clothes4Souls, which could account for $11.6 million in gift-in-kind value for the year. He’s also considering debuting Food4Souls, which will send crates of canned goods to starving people, in 2012.

As the van pulls into Delmas, the streets are crowded. They are vibrant with commercial activity. Bags of water, mangos, clothing and repaired cell phone chargers are all sold here.

Shoes are being hawked on every block. They hang from makeshift ceilings, are piled in tubs and they are spread out on blankets.

Elsey is very interested in speaking with these proprietors. He asks how much the shoes sell for and where they come from. They are all used, and generally retail for $6 to $13 in U.S. currency.

Soles4Souls hopes to assist in the process by providing people with the resources to start small businesses. To facilitate that, Elsey wants to give 500 Haitians each 100 pairs of used shoes to sell. Then they would buy more pairs from Soles4Souls for $1 a piece.

“We will put them in business and see how they do,” says Elsey. “Our excess pairs in America can help people here earn a couple of bucks a day. It also will teach them a trade: how to fix and repair eyelets and bottoms, clean them and sell them. And it keeps the shoes out of U.S. landfills, so there’s an environmental element, too.”

As the Soles4Souls group presses deeper into Delmas, it becomes clear that Haitians aren’t just selling here, they are living here as well. That gets Elsey talking about the need for sustainable housing.

His goals are ambitious. He intends to take old shipping containers — which rarely get returned to the U.S. because it costs too much to send back something that’s empty — and convert them into homes. The goal, he says, is to ask footwear manufacturers to sponsor a village for $25,000. He will start floating the idea to industry executives this summer.

It’s a tactic Assist International has already used in Africa, and the organization is here to expedite and replicate that process for Soles4Souls.

Bob Pagett, founder and president of Assist International, says, “We’re here to be a partner with Wayne and assist any of his shoe connections that want to do more than just give away shoes.”