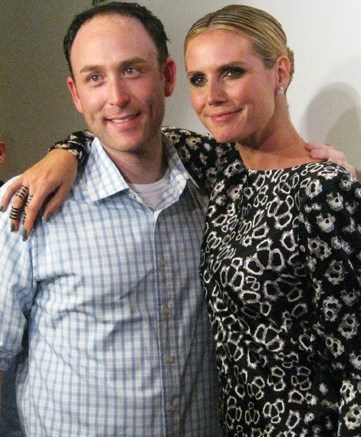 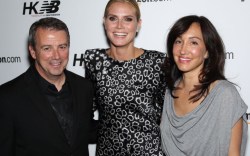 Heidi Klum is showing off her active side.

The “Project Runway” host and supermodel celebrated Thursday the launch of her activewear line, Heidi Klum for New Balance — the first of many apparel and accessories collections that will be sold exclusively on Amazon.com.

The collaboration with New Balance, which was opened up to consumers on Amazon yesterday, includes leggings, outerwear and woven tops. For spring ’11, the line will also include footwear.

One of the first customers was Klum herself, who by Thursday evening said she had already purchased three hooded sweatshirts.

“I start my day at 7:30 a.m. and I don’t want to [be super stylish], but I want to look good,” said Klum, who has four children and noted the collection suites her on-the-go lifestyle. “I want to [be comfortable], not wear a mini-skirt.”

Joseph Preston, EVP of global footwear, product and marketing for New Balance, hinted that the coming footwear styles will have a classic look, mixed with fitness and toning components.

“She’s an incredible lady so we’re proud to be associated with her,” said Preston. “Obviously she has very good taste and in the end, [the styles] will be something she’ll wear and be comfortable with.”

Maria Renz, VP of shoes at Amazon, echoed that the goal is to produce a full breadth of product. “Footwear for spring is one of hopefully many parts,” said Renz. “It’s a great example of [Amazon’s] global capacity and reach we have with our customers.”

The collection launched in six countries worldwide, including the U.S., Germany, the U.K. and Japan, said Rick Cytrynbaum, co-founder of Modern Vintage and Majestic Mills, which owns the worldwide license for Klum.

“We wanted to do something different; everybody is used to going online so we launched exclusively on Amazon,” said Cytrynbaum. “[We were] thinking outside the box and thought it should be a global reach.”

During the launch party, dancers sporting Klum’s new line performed onstage, with the help of a trampoline. After a few words from Klum and a slideshow of the ad campaign, a large projection screen showed Thursday’s episode of “Project Runway,” in which contestants were asked to design an item of clothing that could be added to the New Balance collection.

Overall, Klum said working with New Balance has been a great fit. “In terms of the retro look, which is so hip right now, they are the leaders,” she said.