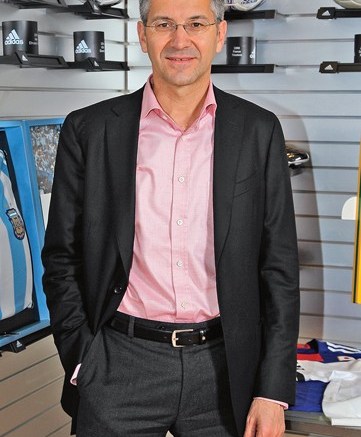 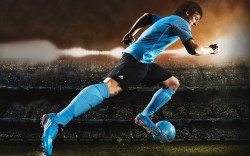 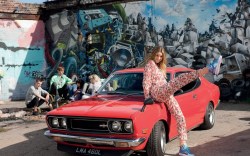 NEW YORK — Adidas Group CEO Herbert Hainer is banking on new growth plans and a recovering economy to give his firm a lift in 2010.

For the year, the German athletic giant is focused on continuing the momentum at Reebok, capitalizing on the upcoming FIFA World Cup and building the Adidas brand image with a new Originals campaign — all initiatives they hope will translate into stronger financial results.

As reported last month, the firm saw a 65 percent drop in fourth-quarter profits, but Hainer said cost-cutting efforts are paying off.

“In 2009, we [did] our homework. We reduced our inventory dramatically,” Hainer said during an interview in New York last week. “We are in a very healthy position and I’m convinced you will see growth for our company in 2010.”

However, the CEO was realistic about the economic recovery. “The economy in general is getting better, but it’s not a one-way street. There will be bumps along the way, [but] I’m more optimistic today than I was six months ago,” he said. “It’s not all glory yet, but it’s definitely more alive than three or six months ago. The worst is over, but it will be a slower buildup.”

Nevertheless, Adidas is seeing some bright spots in its business, particularly when it comes to the Reebok brand, which has been a weak performer since Adidas acquired it in 2005. Hainer said it has started to see a resurgence, thanks, in large part, to the success of its EasyTone line.

“Consumers are still cautious, but I also believe if you give [them] the right reason, they are willing to buy. And the best example is EasyTone,” he said. “If you are giving [consumers] new, innovative product, they will purchase it.” (For an in-depth look at the Reebok strategy, watch for the cover story in next week’s issue of Footwear News.)

At its flagship label, Adidas is focusing much of its efforts around the World Cup, kicking off in June in South Africa.

The brand is backing 12 teams and more than 100 players, and expects to achieve “record” World Cup-related sales. In addition, the company is rolling out branded World Cup product every month, including the championship ball.

Matt Powell, an analyst at SportsOneSource, said the World Cup will play a role primarily in Adidas’ international sales.

“The only way they could get a lift in the U.S. is if the U.S. wins, and the chances of that are pretty slim,” he said. “[However], internationally, it’s very significant, and Adidas really knows how to leverage an event like that.”

Also crucial to 2010 is the brand’s Originals advertising campaign, which is an extension of “House Party” (the campaign created for Adidas’ 60th anniversary in 2009) and uses the new tagline “The street where originality lives.”

Among the celebrities featured in the campaign are David Beckham, Snoop Dogg, Whitney Port, Agyness Deyn and Jeremy Scott. Ads will run in print and online, including on the brand’s Facebook page, and will continue through the end of the year, with updated versions coming out along the way.

Growing the company’s retail presence is also a priority for Hainer.

Across all its brands, the company expects to open 150 stores and remodel around 200. Most of the new locations will bow in emerging markets such as Russia and China. Adidas also plans to grow its retail partnerships with numerous shop-in-shops.

“We have a good array of [distribution] in the U.S. now, but [overseas], where there is no infrastructure for retail, we had to open our own stores to get closer to the consumer,” said Hainer.

On the product front, the company is committed to growing its miCoach interactive training system, which launched earlier this year. Adidas recently hired two electronic companies to assist with the microchip system that provides a coaching program, including training zones and feedback on the athlete’s progress.

“We had been a little bit too complicated in the first instance, but now we are making it more usable and easy to handle,” said Hainer. “This coaching system will get bigger. … More and more people want to have products that are customized to their needs.”

Even as Adidas forges ahead with new initiatives, Powell predicts a tough year ahead. “In footwear, 2009 was a down year on top of a weak 2008, and 2010 hasn’t started off much better,” he said, adding that the firm’s potential depends on the product. “They oversupplied the market on Superstars, but they have such a deep vault of terrific, iconic product. If it’s managed correctly, they could have a lot of fun with that.”

For his part, Hainer said the athletic segment is faring better than other markets.