Getting to Know Michael Lewis 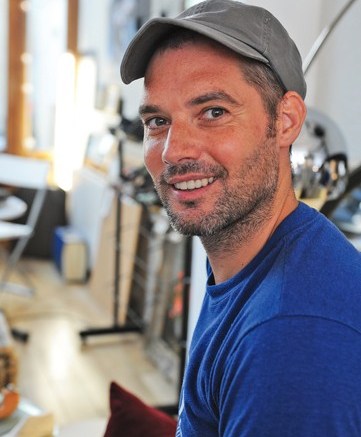 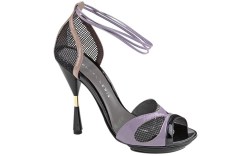 At just 38 years old, Michael Lewis has already amassed an impressive list of accomplishments in footwear and on the runway.

The London-based designer has produced shoes for some of the fashion world’s heavy hitters, most recently inking consulting deals at both Versace and Tom Ford. And yet, he’s still perceived as a newcomer, winning the British Fashion Council’s coveted New Generation award two seasons in a row. “I’m not really new at all,” said Lewis. “I’ve actually been around for a long time.”

Lewis graduated from London’s Central Saint Martins College in 1996 with a degree in fashion and printed textiles. He took a job with Jean- Charles de Castelbajac in Paris, and later moved to Gucci in 1999 to be a footwear designer. He worked at Louis Vuitton from 2001 to 2006, and did stints at Burberry and Loewe before creating an eponymous line in 2009.

For spring ’11, his collection of 26 styles are characterized by both square toes and asymmetric toe shapes, island platforms and other mid-heel looks in aquamarine, lilac and milky coffee patents. “I’ve also added kitten heels,” he said. “For me, the challenge was about making mid-heels that are sexy, fashionable and desirable.” Retailing from $500 for flats to $750 for heels, the line is available in 20 stores internationally, including En Avance in Miami and Harvey Nichols in London.

“[Michael’s] styling is amazing and very different,” said Ida Petersson, buyer at Harvey Nichols. “He comes with such a good grounding in terms of last and fit.”

Lewis also continues to make a name as a shoe design consultant. His first women’s shoe collection for Tom Ford bowed in New York last month. “Tom Ford knows his footwear, and he’s brilliant at what he does,” said Lewis, who first met Ford at Gucci.

Meanwhile the Lewis-designed Versace men’s and women’s shoes will be unveiled during the fall ’11 runways in Milan in January and February. (Lewis also works on footwear for British brand Jaeger.)

Footwear News caught up with the busy designer last month at his studio in Hampstead, North London, as he was putting the finishing touches on Tom Ford’s line and preparing to show his collection at London Fashion Week and Premiere Classe.

FN: Why has it taken so long for word to get out about you?
ML: When you work as part of a design team for different fashion houses and are in the background, you’re not really given the opportunity to make yourself known as an individual designer. However, that’s changing now, for example, with Stefano Pilati at Yves Saint Laurent, who was previously behind Tom Ford; and Martyn Bal, now design director of menswear at Versace. [He] worked behind Hedi Slimane for Dior Homme.

FN: What types of projects did you work on with Marc Jacobs at Louis Vuitton?
ML: I started shoes with Marc and worked on the first Stephen Sprouse collection, the Julie Verhoeven collaboration, as well as the Alice in Wonderland and Egyptian collections. I also helped build the commercial collections. So by the time I left, Vuitton had a multimillion-dollar shoe business. Marc is phenomenal — he really knows everything about shoes and bags.

FN: Why did you move to Burberry from there?
ML: I accepted the position because I wanted to move back to London. I thought Burberry would have the same emphasis on footwear as Vuitton, but at the time, it didn’t. However, it was amazing working with Christopher and Rose Marie Bravo, and it was my colleague there, Martyn Bal, who became Versace’s creative director for menswear and he recently put me in touch with Donatella Versace.

FN: After that kind of success, why did you decide to launch your own collection?
ML: I spent a lot of time building other people’s shoe businesses and wanted to have a go myself.

FN: Did all those high-profile jobs help prepare you for your own launch?
ML: Having the high-profile jobs has been great, but with regard to my own line, I try to keep the two worlds quite separate. I feel it’s important for my line to have its own persona and not to be overshadowed by my consulting.

FN: What is the biggest challenge of having a namesake collection?
ML: There’s a saturation of designers with their own collections. Stores only have a limited amount of floor space, and they have to lose a designer to bring in a new one.

FN: What has it been like to launch in a bad economy?
ML: It’s been quite challenging. Working in a recession, it has been good to learn the limitations of the industry. When you’re working in this climate and have to overcome difficulties, it strengthens the brand and you, as an individual.

FN: And are there benefits to living in London?
ML: Here you have a very international city with a lot of culture and inspiration. And you’re close to mainland Europe, making going back and forth to Italian factories very easy.

FN: What’s next for your line?
ML: I’m hoping to get an investor, a partner who could have a share in the company and help me add other categories such as jewelry and bags, as well as open my own stores.