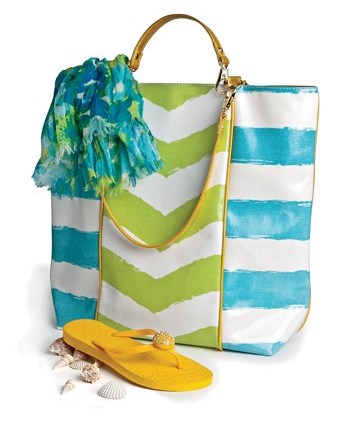 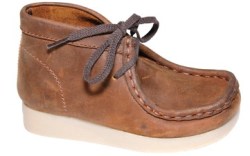 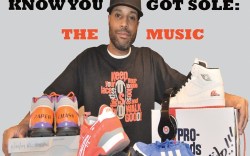 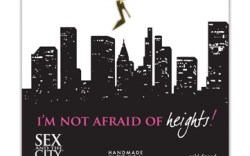 SPRING AHEAD
Just in time for spring, entrepreneur Lindsay Phillips is rolling out a new line of flip-flops, totes and scarves in an array of stripes, floral prints and metallics. Phillips founded SwitchFlops and released a ballet flat last fall, and is now expanding the offering. The Jordi flops retail for $24 and come with interchangeable snaps, such as multicolored jewels and ocean-inspired designs. The bags range from $20 to $65, while the scarves retail around $25. The styles can be found at select boutiques and online at Lindsay-phillips.com. Next month, Phillips also plans to launch an additional tote and towel for beachgoers heading out to grab some early sun.
Kristen Henning

Take It Down
Coming off the 60th anniversary of the Clarks Originals Desert Boot, the iconic brand is offering pint-sized customers a chance to step into the heritage design. This fall, the Newton Upper Falls, Mass.-based company will introduce a companion kids’ style that it hopes will resonate with parents and grandparents. While the Desert Boot may have put the brand on the map, it today shares the spotlight with the Wallabee, a companion look introduced in the 1960s and also being made available for kids for fall. This duo of cool classics is set to hit stores in June in a range of colors and materials. Sizes include first walkers to juniors’, with retail prices from $50 to $65.
Barbara Schneider-Levy

Sole Sounds
For the sneaker obsessed, it doesn’t just stop at your feet anymore. Fans can now rock out to 10 original songs about shoes with “Know You Got Sole: The Music.” The songs, which were released last week and produced by Sean Williams of Obsessive Sneaker Disorder (a talk show podcast), are available on Amazon, iTunes, Rhapsody, Myspace Music and other media outlets. An online video network featuring interviews with the artists and producers will also coincide with the release, as well as a virtual tour where Williams will appear on various music-related sites through the end of this month.
K.H.

“SEX” Charms
Anticipation is already building for the next “Sex and the City” movie, and in preparation, Dogeared Jewels & Gifts is releasing a line of charm necklaces that capture the signature style of the four main characters: Carrie, Charlotte, Samantha and Miranda. The jewelry collection references memorable quotes from the film on packaging materials, with lines such as “shopping is my cardio” and “I’m not afraid of heights.” The charms, inspired by the movie, include a stiletto, a diamond and the Eiffel Tower. The line launches May 1 at the HBO Shop in New York, at Bloomingdale’s retail locations and online at Hbo.com, just in time for “Sex and the City 2,” hitting theaters May 28. Prices for the jewelry range from $55 to $200.
K.H.