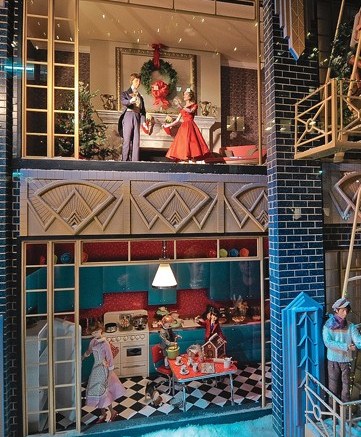 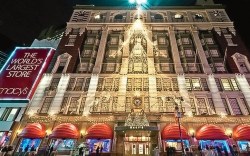 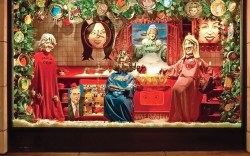 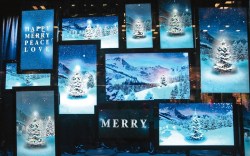 America’s oldest department store is showing off its customers’ favorite holiday memories. To gather inspiration for this year’s holiday display, Lord & Taylor invited shoppers to submit their seasonal traditions through letters or over Facebook. “Our goal was to share the holidays with our customers,” said Amy Avitabile, SVP of marketing for the retailer. “We often hear from them that Lord & Taylor is an integral part of their traditions, so we wanted to reciprocate and incorporate theirs into our holiday windows.” The result is this year’s theme, “Share the Joy,” which celebrates different Christmas pastimes in New York. The flagship’s Fifth Avenue windows highlight 12 scenes, including trimming a tree, posing for a holiday photo and baking cookies on Christmas Eve. Ashley Mason

Barneys celebrates culinary heroes this year in its “Have a Foodie Holiday” campaign in partnership with the Food Network, Cooking Channel and Illy Caffè. The New York store’s Madison Avenue windows present scenes of popular chefs such as Martha Stewart and Julia Child, posing in bright, festive kitchens adorned with antique cookware, Illy Caffè products and student-made portraits. The paintings in the display will be sold to benefit students at The East Harlem School. Other flagship stores nationwide will present caricatures of favorite regional chefs, including Rick Bayless in Chicago, Stephan Pyles in Dallas and Tyler Florence in San Francisco. Behind-the-scenes footage about the window displays is airing at Foodnetwork.com. A.M.

Bloomingdale’s went high-tech for its holiday decorations this year. The department store’s Lexington Avenue windows in New York feature nearly 100 digital screens showing computer-generated animations that illustrate this year’s theme: a dreamy, wintery mosaic. Inside the store, a special “Good Deeds” wall will be on display throughout the holiday season. Proceeds from the products on the wall will go to various charities, including Child Mind Institute, Americares, The Acumen Fund and Autism Speaks.

Macy’s brings the magic of Broadway to a smaller venue this season. Renowned scenery and mechanical effects-makers PRG Scenic Technologies helped the department store recreate scenes from beloved holiday productions including “Yes, Virginia,” “Miracle on 34th Street” and the new musical “Elf” in this year’s New York display. The six window scenes, made almost entirely out of paper, are meant to mimic the appearance of a large pop-up book — but one that moves. Macy’s window designer Paul Olszewski is using LCD screens to animate the paper. Crew members spent 35 weeks crafting the detailed scenes, which will be on display until Jan. 3. A.M.