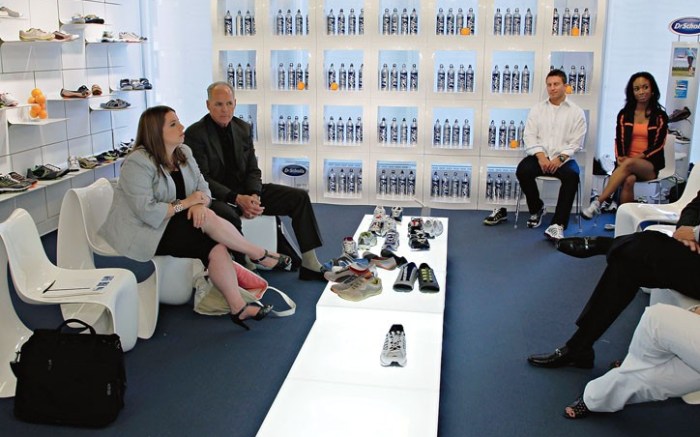 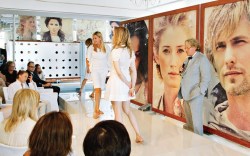 NEW YORK — While footwear has been a boon for many retailers this spring, the outlook for the back half is cautious.

The mood at last week’s FFANY show was optimistic, thanks to major strength across the toning category, as well as the expectation that boots will be strong again this fall. The market was also lifted by strong sales reports from major retailers.

For example, luxury department store Neiman Marcus Inc. said shoes and handbags were the best-performing categories during its third quarter. Meanwhile, in the family footwear sector, Brown Shoe Co.-owned Famous Footwear reported that comps were up an impressive 16 percent in May.

Still, not everyone is ready to declare victory. A number of independents attending FFANY said uneven results were forcing them to remain conservative.

“I thought things were getting back to normal,” said Benjamin Lovell Shoes COO John Holden. “I was more optimistic six months ago, but May took it out of me. I was planning for increases and bought accordingly, but as each day goes by, my confidence [lessens]. The traffic is not there.”

The Philadelphia-based retailer attributed the drop, in part, to the fickle stock market. As a result, the store lowered price points to draw customers back in, said Holden.

Joy Goldberg, owner of Larkspur, Calif.-based Item Shoes & Accessories, said she will continue to monitor inventories until she is confident about a full recovery. “I was feeling optimistic, until I figured out I was below last year [in sales],” said Goldberg. “I was very [hopeful], but now I’m feeling challenged again.”

While Goldberg is more price conscious than ever, she said she does not want to turn to product with poor quality, pointing to the $150-to-$175 range as the sweet spot.

While some retailers were wary, others were more upbeat about their prospects for the remainder of the year.

“We have had an excellent spring season with significant double-digit growth,” said Adrienne Heron, director of buying for Toronto-based Ron White The Foot Shoppe. “We see this trend continuing right through fall, and there are no signs that it will slow.”

Heron said that, for the coming season, the company added some fresh, younger lines, while passing on brands that have been slower performers in the store.

Henderson, Nev.-based Zappos.com has high expectations for the second half of the year, thanks to its strong inventory position. “Brick-and-mortar fell short, putting us in a good position,” said director of performance Christopher Peake. “We took a chance and it paid off.” He added that sandals are expected to be a top performer this summer, followed by boots for fall.

Online retailer Lovemyshoes.com has been down by about 12 percent for the year, but inventory is 50 percent less, said owner Robert Yeganeh. After a strong few months recently, the retailer is bringing in new product on a weekly basis. “[We’re doing] much better than 2009,” said Yeganeh. “We realized change is good.”

Owner and designer Charles Nolan of the New York-based namesake store is adjusting this year by closely analyzing consumer buying.

“We’re going to work with a shorter [time frame, and buy] as tight as we can, so the customers can tell us what they want and we can better learn their shopping habits,” Nolan said, noting that the store will continue with clogs and booties for the upcoming months.