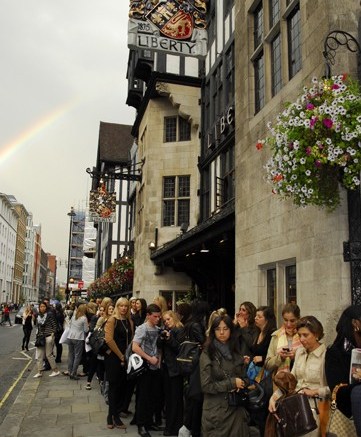 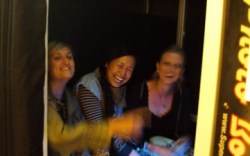 Fashion’s Night Out in London Wednesday lured big crowds, with lines snaking around the Liberty of London flagship shop and crowds gathering outside the Stella McCartney and Armani parties, where the designers and celebs such as Gwyneth Paltrow, Thandie Newton and Claudia Schiffer all made appearances.

Manolo Blahnik was back at Liberty for the second evening in a row, signing copies of his new sketchbook, “Manolo’s New Shoes,” while Christian Louboutin’s London flagship with crammed with women queuing up for lipstick applications courtesy of Nars.

Charlotte Olympia also tapped into the beauty theme, where shoppers were treated to animal-inspired manicures. “Leopard-print manicures to match my platforms,” said the brand’s designer, Charlotte Dellal. “It’s all about my signatures.”

Rupert Sanderson’s store, meanwhile, was filled with women and men learning to samba. “We were inspired by the parquet floor,” Sanderson said. “After last year’s event, where we made the biggest shoe in the world, it seemed hard to top. But these dance lessons just might.”

But the last laugh went to Georgina Goodman, where women were heard whooping in hysterics in the photo booth the designer installed for the night.