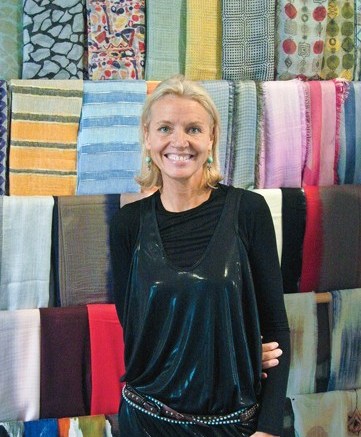 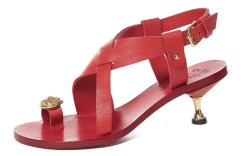 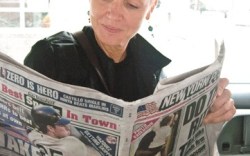 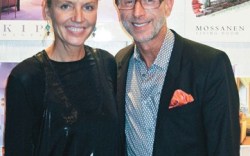 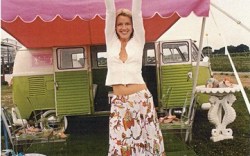 Designer Trish Carroll talks about her new “bella contessa” aesthetic, knack for pop-up shops and vision for her brand’s future.

10:30 a.m.: I arrive at Greg Mills’ new accessories showroom in downtown Manhattan to meet designer Trish Carroll of Miss Trish of Capri. Greg greets me and is eager to show his latest arrivals, so I try on everything from Lola hats to Rosa Mosa clog boots to Muun handbags. Soon, Trish arrives out of the rainstorm.

11 a.m.: The designer shares her vision for the Miss Trish of Capri collection, which re-launched for spring after a two-year hiatus. The line will center around a Roman-inspired theme of timeless, chic, hand-cobbled sandals fit for a contessa. She cites films such as “Roman Holiday” and “The Roman Spring of Mrs. Stone” as influences, as well as muses Marella Agnelli and Margherita Missoni, who “mix family heirloom pieces with contemporary designs for a collectible, worldly chic,” Trish says. “I envision a woman who has a unique sensibility and effortless style. This collection is hand cobbled with woven leathers, antique gold and pewter details, and Romanesque jewels like lions‚ heads and coins.” Ponyhair accents, kitten heels and a burnished Roman red leather are other highlights of the collection, retailing from $300 to $450.

11:30 a.m.: Our conversation turns to branding and value in the luxury market. Trish emphasizes, “I’m aware of the competition out there, but I wanted to keep a strong hold on authenticity and quality. You’ve got to be ahead of your competition, but you also have to stay true to your brand. Especially if you want to focus on a salon business, you’ve got to send a clear message of ‘this is who I am.’” As a designer who began at Ralph Lauren and Nine West, and went on to partner with Target for a limited-edition collection, Trish says she knows the importance of branding — and in making shopping fun. Trish’s first Miss Trish of Capri collection launched via a farm stand cabana shop in Bridgehampton, N.Y., in 2003. James Spodnik, Trish’s longtime friend, colleague and muse, helped design the cabana with a white deck, yellow awning, chandelier and birdbaths to display the shoes. “The sense of discovery made shopping more exciting for those first customers,” Trish says. “It was like the forerunner of a pop-up shop, but I built my customer base through socialites and other trendsetters, so I was well poised to start a wholesale business after that first summer.” The next year, also with James’ assistance, Trish painted a 1967 surf van and rigged it as a Malibu Barbie-inspired mini-boutique.

12:15 p.m.: After Trish talks about her other shops — a tiny “jewel box shop” in Palm Beach from 2003 to 2010 and another pop-up shop at Frederic Fekkai on Rodeo Drive — I can’t help but inquire: What’s next for her? Trish confesses she and James are at it again, as he is in Miami hunting for a new retail location for Miss Trish Splash, the designer’s bejeweled flip-flop collection produced by Totes/Isotoner. “The market is ripe there with a strong international population, tourists, a large Art Basel following and people who love fashion. It was obvious that Miami should be the next home for a Miss Trish shop.” The duo, with the input of interior designer Jamie Drake, whose client roster includes Madonna and New York mayor Michael Bloomberg, are hoping for a small space with a “sexy, sunken living room vibe.” The product — printed and embellished flip-flops, priced between $55 and $65 at retail — already has developed quite a following. Miss Trish Splash is sold at Bloomingdale’s, Lord & Taylor and Nordstrom in the U.S.; Harrods and Selfridges in London; La Rinascente in Milan; Galeries Lafayette and Printemps in Paris; On Pedder in Hong Kong, and others.

1 p.m.: We head to Balthazar for lunch. As we eat, Trish says she has also created an accessory retail store on wheels called La Smooch that debuted this summer in the Hamptons. “James worked with me to create the leopard-printed boutique van for La Smooch and then I licensed it so I can focus my attention on setting up shop in Miami. You really have to keep your eye on the total picture of the business, and La Smooch could possibly expand to Florida or Los Angeles,” says the designer. Trish herself is always on the move, and next she’ll head to her native Cheyenne, Wyo., to watch her grandfather, Floyd “Doc” Carroll, a 1914 bronco riding rodeo champion, be inducted into the Cheyenne Frontier Days Hall of Fame on Sept. 10 (with Garth Brooks!).

2:30 p.m.: We jump in a taxi for an appointment with Jamie at his uptown office, while Trish pulls out the day’s New York Post to read her horoscope. She says her daily routine starts with calls from Italy, coffee and, most important, the Post — first the horoscopes, then Page 6, then the business section. Her horoscope looks bright, so we talk more about future plans. Trish says she intends to add costume jewelry to her collection since “it would be a natural transition for me because of the Miss Trish jewels.”

3 p.m.: We meet Jamie in an elegant conference room and begin to discuss plans for the Miami location. Trish says she has James scouring the city for something close to the beach with a sunken living room to carpet. “I’m thinking an aquatic, modern-day, rat-pack vibe, but with more Hollywood glamour,” Jamie says. “A salon environment.” “Yes, with a sense of adventure!” Trish adds.

3:30 p.m.: Before parting, Trish asks Jamie when they can revisit her winter collection, as she is continuing on the “bella contessa” theme of tailored hand-cobbled footwear and wants to use home furnishing touches. “I’m imagining closed-toe burnished leather styles, such as sabot slides with ornamental brocades. And I’m also looking at fabrics for a boot,” she describes. Jamie enthusiastically agrees and the two plan to pick up later on that.