Clicking In to U.S. E-tail 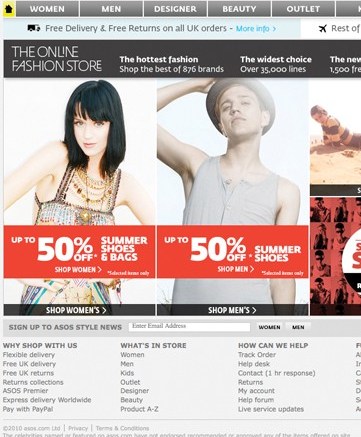 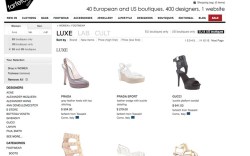 European e-tailers are looking to capture more U.S. consumers with market-specific sites and a fresh mix of brands.

Although the online market is already crowded — and dominated by players such as Zappos.com — companies including Farfetch.com, Asos.com and Yoox.com are hoping to stand out with a fresh mix of brands and styles, many of which have never been sold to an American audience.

“Our hook is that we are taking the British high street to the States,” said Robert Bready, product and trading director at Asos, the largest multibranded U.K. fashion retailer, which will launch a U.S.-specific site in September.

“Zappos and Piperlime.com focus on more American brands and don’t bring in niche up-and-coming [labels], or the kind of quirky product we have,” he said, adding that Asos’ in-house designers and buyers scour the world’s fashion fairs, from Berlin to São Paulo, looking for fresh product.

Bready said Asos already had a strong U.S. customer base, attracting about 300,000 shoppers in a typical week. The new American site will feature different content and language than the flagship U.K. site, although product will be shipped from across the pond, at least initially.
Asos’ vendor partners are also upbeat about the stateside initiative.

“The opportunity to have our range offered online in the U.S. will be very valuable in giving the brand exposure in the market and helping us to understand what products the market likes, especially as Dune is looking to enter the States in the coming years,” said Daniel Rubin, CEO of footwear retailer Dune.

Farfetch, which launched its U.S. site last November, partners with boutiques and independent designers, such as Beatrix Ong in London and Biondini in Paris.

“The site has great visibility in the U.S., and I now sell more there than I do through the site in Europe,” said Patrick Melloul, owner of Biondini. “Prices are exactly the same as they are in my Paris store, which here is considered expensive. However, I’ve looked at other U.S. websites, and it turns out that brands I sell, like Chloé, Giuseppe Zanotti and Gianmarco Lorenzi, have higher prices over there.”

Farfetch founder Jose Neves said the global feel of the site is a strong selling point.

“The U.S. is the most sophisticated online market in the world,” Neves said. “Our boutiques have a global take on fashion, many being based in cosmopolitan centers such as Paris or London, so their selection is definitely relevant for the U.S. public.”

The company ships worldwide using UPS, while U.S. residents have to pay import duties if they buy from any of the European retailers who sell on the site.

To further expand its stateside reach, Farfetch inked a deal with the company behind Revolveclothing.com to expand the site’s offerings in the U.S. to include on-site shops from Fred Segal Man and American Rag, as well as other U.S. independent retailers.

Yoox SpA, the high-end Italian e-tailer, is also ramping up its U.S. presence.

Yoox founder Federico Marchetti said the U.S. is a “fundamental market” for Yoox. The Bologna-based company, which is listed on the Milan Stock Exchange, said that in the first quarter ended March 31, revenues in North America rose nearly 112 percent, compared with the year-ago period.

Marchetti is banking on Lee’s “vision” for the U.S., which is the retailer’s “second market,” he said, “the one that has grown the most, and we are highly focused on it.”

Market watchers were mixed about the European e-tailer’s prospects in the U.S. market.

“All these are good operators. The problem is they will have to spend a lot of money to get share of mind,” said George Wallace, CEO of U.K.-based retail analyst MHE Retail. “They’ve got to be prepared to do this. Otherwise they’re in danger of being invisible.”

Maureen Hinton, lead analyst at retail consultancy Verdict, said companies that offer a point of difference and focus on trend-right, moderately priced product will have an edge.

“U.K. fashion brands are well-received because [the U.S.] doesn’t have the fast-fashion market like Europe does,” Hinton said, “and with the U.S. economy appearing to do well again, it’s likely [these new sites] will generate demand.”