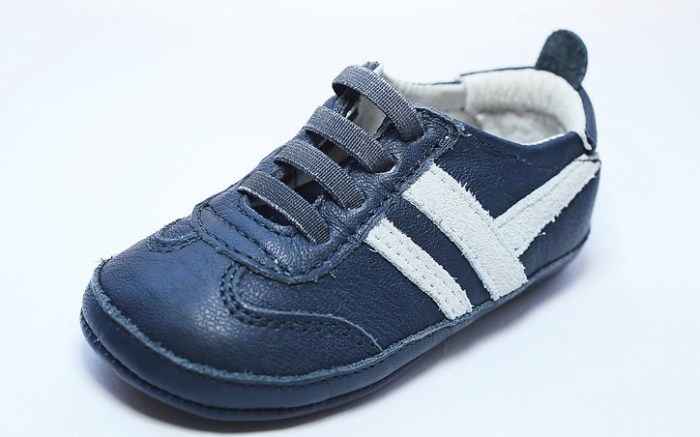 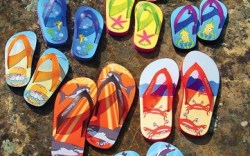 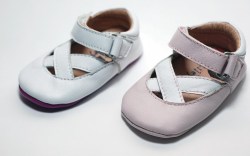 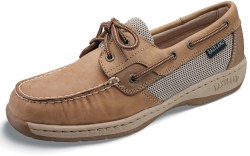 Baby Steps
Australian brand Old Soles is bound for the States this spring. The 2-year-old line, created by Vicki Lever, who has designed for ballet shoemaker Bloch, features simple silhouettes and classic styling for infants and toddlers. Shoes for girls include ballerinas and Mary Jane looks in colors such as soft pink, silver, gold and black. Boys get sneakers (at left) and classic loafers in brown, black and navy. The shoes, which retail for $40, are all handmade and feature natural leather uppers, padded leather insoles and elasticized backs for comfort. Styles within the pre-walker size range have soft leather soles for a close-to-barefoot fit, while the first-steps shoes have no-slip rubber soles for gripping the ground. To expand the collection, Lever has added four fashion sandals for older girls for spring. Available in sizes 24 to 29 and retailing for $68, the sandals include a silver gladiator-inspired look and a gold thong style with a chain detail. Old Soles is imported and distributed in the U.S. by New York-based Lolligo.

Go Fish
Inspired by her love of the beach, 8-year-old entrepreneur Maddie Robinson, together with her father, Dan Robinson, has created a line of flip-flops for kids called FishFlops. Available in sizes 7 to 3, the flip-flops are decorated with colorful illustrations of fish, sharks, dolphins and other marine life. The Robinsons plan to create a virtual world of play and learning for kids on the Houston-based brand’s website. They also are working on adding apparel, toys and other items. Launching in stores this spring, FishFlops retail from $12 to $14.

Crib Notes
Baltimore-based Rileyroos, known for its rubber-bottom first-walker footwear, has added soft-sole crib shoes to its lineup for spring. The Carley, a girls’ Mary Jane style, comes in pale pink and white and is detailed with crisscrossed straps and a small flower accent. The all-leather shoes are available in a single size, 0 to 3 months, and retail for $32 a pair. Rileyroos plans to expand the offering in the coming seasons.

Heading East
Eastland Shoe Corp. is making it a family affair — again. The Freeport, Maine-based firm, known for its traditional men’s and women’s footwear, is returning to the kids’ business after a hiatus of several years. According to Eastland President Jim Klein, increased requests for children’s shoes from the company’s retailers, coupled with a renewed interest in classic Americana looks, prompted the move. Farmington, Mo.-based Trimfoot Co. has been tapped to produce the new line, which will include styles for boys and girls in sizes 10 to 6. The offering will address both the fashion and school uniform categories, with an emphasis on core Eastland adult styles reinterpreted for kids, among them oxfords, boat shoes (at right), bucks and slip-ons. Retailing from $45 to $60, the line will be sold in a mix of family footwear stores and independents, beginning next June.

Going Higher
Bobux is adding a touch of luxe to its line of baby shoes. The New Zealand-based company has debuted a higher-end crib shoe collection called Pram, geared to gift givers. For infants up to 3 months, the all-leather soft-sole shoes retail for $34. The inaugural offering consists of four styles, including a soccer-inspired sneaker and a Mary Jane look. Slated to hit stores in February, Pram will be sold in better boutiques and specialty retailers.