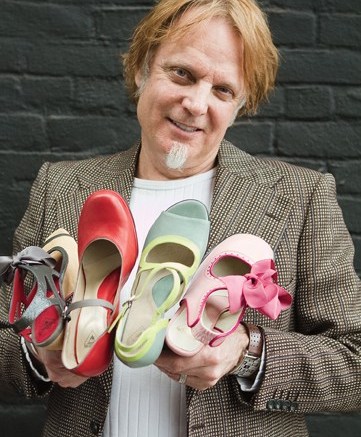 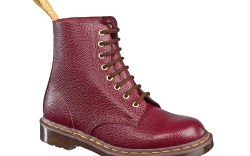 Background: John Fluevog started out selling shoes in Vancouver, before he and then-partner Peter Fox opened their own shoe shop, selling mint-condition vintage styles. In 1986, he took over the business and built a second location in Seattle, while also launching a namesake collection that he offered at wholesale. Thanks to his funky, often-irreverent approach to fashion, Fluevog’s Seattle store quickly became a favorite in the grunge capital, thanks particularly to his now-iconic Angel styles, featuring a natural latex sole engraved with the tag line “Resists alkali, water, acid, fatigue and Satan.” Today, the designer’s shoes are sold in 11 countries, with stores in Canada and the U.S., and year-to-date, the company is experiencing double-digit growth over 2009.

Staying power: “My shoes have always been different — a reflection of my personality, the artsy side of me,” said Fluevog, admitting that “sometimes they’ve hit the mark and sometimes they’ve missed.” And a unique sense of style is not the only thing that has given Fluevog an edge: “I’ve also been blessed with an unusual name,” he joked.

Memorable moments: In the 1990s, Fluevog’s signature Munster style, a flared-heel design, was worn by Madonna in the film “Truth or Dare” and by Lady Miss Kier on the cover of Deee-Lite’s album “World Clique.”

Coming up: A second San Francisco Fluevog store is set to bow this summer on Grant Avenue near Union Square. “My market is broader than it ever was,” said the designer, noting that his customer base now includes 35- to 50-year-old professionals. These consumers, he explained, are more likely to shop Union Square than his original Haight Street location. “They’re pilots and lawyers [now].”

Marketing: Collaborations include a watch by New York design company Nooka, and a special coffee blend and limited-edition shoe called the Tenango (for the Guatamalan coffee region) with Vancouver-based JJ Bean Coffee Roasters. A retrospective of Fluevog’s work is also on display in the Museum of Vancouver through Sept. 26, and FluevogCreative has an ongoing a contest for fans to submit artwork for a print ad and the chance to win $1,000.

Reissues: The #2 Powell, a 1970s Blake construction men’s style; Truth Pilgrim, a pointed-toe buckle style for women from the 1980s; the signature Munster; and Hi Choice Vanny, an oblong silhouette on a 3-inch heart-shaped heel from the 2000s.

Background: What started out as humble work shoes and boots — first worn by British policemen, postmen and factory workers — became a global fashion phenomenon, thanks to the enterprising Griggs family in England. Dr. Martens is based on an air-cushioned sole developed in the 1940s by German doctors Klaus Märtens and Herbert Funck. In 1959, the British shoe manufacturer R. Griggs Group Ltd. was granted permission by the two to manufacture uppers for their proprietary soles. In the 1960s, the Griggs anglicized the name and developed the first eight-eyelet 1460 boot with the distinctive yellow welt stitching and added a black-and-yellow loop at the heel. By the end of the decade, the boot had become associated with subcultures — first with skinheads, then 1970s British bands such as The Who, The Clash and The Sex Pistols, as well as their fans. In 1984, the shoes arrived in the U.S., and by 1999 global sales hit roughly $364 million. Only two years later, worldwide sales started to decline and Griggs & Co. and AirWair International almost went bankrupt. But by 2005, the fashion community rediscovered the brand and the company began to turn around. Today, global sales are climbing once again, hitting about $123 million for the year ending March 2010.

Staying power: “Dr. Martens are in demand,” said CEO David Suddens, who added that the shoes always seem do well in a recession. “It’s a social and fashion issue. When times are hard, we go back to the brands we know. And that’s what Dr. Martens is; it’s a product loved by consumers everywhere. It’s also a symbol of nonconformism — freedom with a rebellious streak.”

Memorable moment: Pope John Paul II reportedly wore a pair under his robe in the 1990s.

Coming up: A 2,000-sq.-ft. store will bow in September in New York’s Soho area, and collaborations with A Bathing Ape and Comme des Garçons are in the works.

Marketing: To connect to its history with bands and the broad range of groups that have customized the shoes over the years, Dr. Martens is featuring newly recorded music and videos on Drmartens.com to mark the 50th anniversary. Ten bands have each chosen a track to reflect their style, such as The Noisettes covering the Buzzcocks’ “Ever Fallen in Love with Someone You Shouldn’t’ve.”

Reissues: The 50th anniversary versions of the 1460 boot (at $200) and 1461 shoe (at $180) are available in black and cherry pebble grain leather, colors synonymous with the brand.