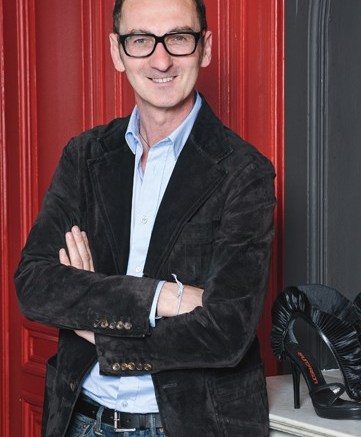 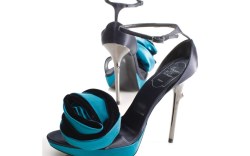 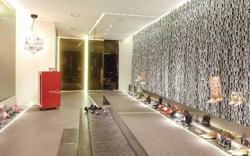 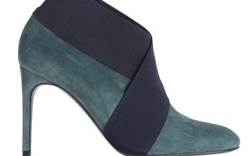 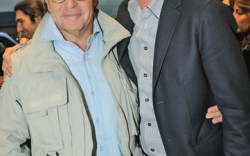 PARIS — Bruno Frisoni is relishing a rare morning off.

With the frenzy of the fall collections behind him and couture still a few weeks away, the designer is relaxed and ready to dive into a conversation about the changing luxury market and the pressures of juggling two high-profile brands.

With his signature black spectacles and slender frame, Frisoni has become the instantly recognizable creative force at Roger Vivier — a role he does not take lightly.

“It’s been built around me, on my shoulders, and I consider the task very important,” he said of his position at the Tod’s SpA-owned brand.

He is equally passionate about his own line, which, while still small, has gained a solid following among top luxe retailers.

“I’ve never seen this kind of opportunity for another shoe designer,” said Frisoni.

For their part, retailers said Frisoni has succeeded in bringing a unique design perspective to both lines.

“Bruno Frisoni and Roger Vivier are very different collections and each has its own very chic identity,” said Jeffrey Kalinsky, founder and president of Jeffrey New York and Atlanta.

“They’re both sexy, eccentric and extreme, but you never see the same things,” Frisoni said.

The brands also employ different business strategies. Roger Vivier is expanding mainly through its own standalone stores, while Bruno Frisoni is focused on bolstering wholesale relationships.

Nicholas Mellamphy, creative director of The Room at Toronto’s Hudson’s Bay Co., said Bruno Frisoni is an important name on his store’s roster.

“Bruno creates pieces that are both interesting and glamorous, pieces that move things forward,” Mellamphy said. “I am always inspired looking at his collection.”

Here, Frisoni talks to Footwear News about why true luxury will never go out of style.

FN: How difficult is it to balance your own line with the duties as the very visible creative director of Roger Vivier?
BF: Roger Vivier has been built around me, on my shoulders, and I consider the task very important. It is difficult to maintain two jobs and have the same energy for both of them. But [it works] because there’s clearly a difference in the lines. They’re both sexy, eccentric and extreme, but you never see the same things.

FN: What is it like to work with Tod’s Chairman and CEO Diego Della Valle?
BF: We are two strong personalities and we have a lot of respect for each other. Tod’s is such a strong company, and it’s incredible that it has maintained such growth.

FN: Does Diego have input into your namesake line?
BF: We sometimes share [ideas], but he is not involved in my business.

FN: Do you think luxury, in general, is coming back?
BF: I don’t think it ever went away. There’s so much confusion about what luxury is. To me, it’s about really beautiful things that are unique, a pleasure to buy, not about price. Look at the new cars that are coming out, like the Mercedes SLS with its winged doors. I love that car!

FN: Has the high-end consumer changed?
BF: They probably buy less and pay more attention to what they buy. That’s why I am making my line even more exclusive.

FN: How are you doing that?
BF: For fall ’10, I cut the size of the collection to about 35 to 40 styles per season. Half of these are continuing styles, half are new. Now I find that when people see the collection, they immediately know what to buy. It’s better edited.

FN: What are the challenges of being a smaller brand during tough times?
BF: Because of the crisis, some retailers ask you — with a big smile — to do business with them on consignment. I’ve never been on consignment, there’s something wrong with it. I invest myself in my collection, so [they should invest, too].

FN: How have fashion trends changed in the past few seasons?
BF: What is very fashionable today is much more conservative. The consumer is still buying extreme styles, but we are moving toward something more bourgeois. A season ago, I tried to work on a different, lower silhouette because extreme silhouettes like platforms were everywhere at every price in every country with every kind of people wearing them. It’s not extreme or refined anymore to me. I just wanted to be different. When you love fashion, you want to have your own look, and over the years, we’ve lost that. But now I feel we are going to something different. Minimalism is something to go back to, especially in luxury.

FN: How much do you think about comfort when designing your line?
BF: Modernity is about speed and comfort … having a comfortable life and being in comfortable places. Why shouldn’t shoes follow? To me, comfort is not Dr. Scholl’s. But you want your shoes to be wearable. A good shoe should not only have a comfortable last but also have the right cut. You should be able to walk, to dance, to forget that you’re wearing them. There is no reason to suffer. I have used elastic to help modernize the look of my shoes and [make the fit better].

FN: The Bruno Frisoni label celebrated 10 years in 2009. What’s next for the brand?
BF: I want to grow the business, but I can’t grow fast. I am very precise in my work and want everything beautifully done.

FN: What other categories are you exploring?
BF: What I really want to do is concentrate on shoes. Maybe I’ll do a few evening clutches, which I’ve done before and which were quite successful, but there are already so many bags around.

FN: Do you plan to expand your retail presence?
BF: Not yet. I am actually working on the existing Bruno Frisoni store on the Left Bank in Paris to make it more popular. Maybe I will open on the Right Bank eventually. And by 2011, I hope to operate e-commerce on my website.

FN: Who else in the footwear industry do you admire?
BF: To me, Manolo Blahnik is still the greatest. And Pierre Hardy is someone who has developed his own business well. I respect him a lot.

FN: Would you consider collaborating with other brands?
BF: I don’t need to design anything else. I am busy enough.