10 Questions for the Makers of Skive 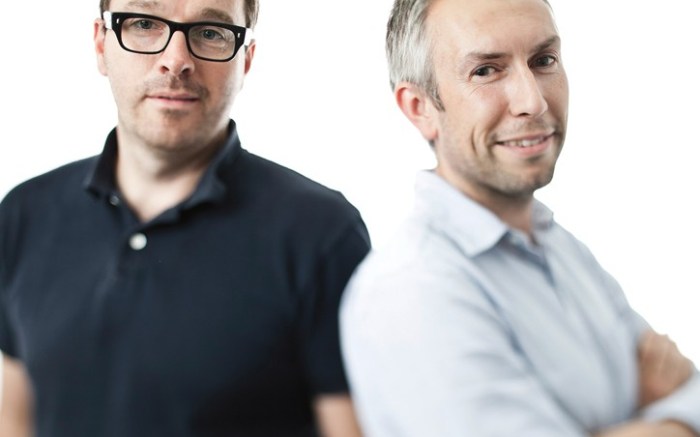 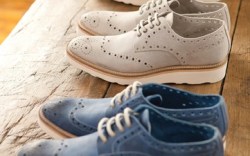 U.K. brand Skive may be named after a British slang term for procrastination, but its founders are definitely not slackers.

Joachim Sedelmeier and Mark Walker, Skive’s designers, own London-based footwear firm J-Walk, which designs, develops and produces shoe collections for such brands as Ted Baker, J. Lindeberg and Reed Krakoff. They also are designing for Oliver Sweeney. But in fall ’09, they decided to do their own thing.

What started as a sneaker-inspired line has become a more-focused, directional range of high-end casuals, including moccasins, chukka boots and boat shoes. The partners also have added a dose of comfort with Duo Vent, a sole technology they developed in China. And though Skive until now has been made in China, production has moved to Italy and Spain for fall ’10, with retail prices ranging from $199 to $290.

“We’re now homing in on the direction we want to go in,” said Sedelmeier (far left, with Walker). “You can get a better feel for who we are and where we’re coming from.”

Sedelmeier and Walker recently teamed with Pierce Jeans to distribute Skive in Europe. With accounts already in independents such as Jimmy Jazz in Brooklyn, N.Y., and Prestige in Freiburg, Germany, the execs are looking to broaden that base.

Here, they discuss the direction of Skive and where they’d like to take it in the future.

1. Why was it important to make the shoes in Italy and Spain?
MW: We always wanted to find a way to bring it back to Europe. Plus, in China, it’s very difficult [to produce] in small quantities. You get restricted and you restrict yourself. We’re now able to do things we feel good about or perhaps wouldn’t have done with those restrictions. I’m not saying we’re never going to make shoes in China [again], but certainly the core is in Europe.

2. Have you made any other changes to the mix since the launch?
JS: We’ve moved the line a bit from a sneaker influence to a more modern-casual influence. It was a natural progression. It’s really hard to find a place in the high-end sneaker world on that level. And for us, the way things are going with fashion, it makes more sense to go that way.

3. Americans might not know the meaning of the word “skive.” What is the inspiration behind the name?
JS: First and foremost, it’s a shoemaking term [meaning to pare down leather to reduce thickness]. But, of course, here in the U.K. it means …
MW: … to skip something. It’s a little rebellious in a way — not going to school or taking a different path.
JS: It shows the leisure aspect of the line. It’s that relaxed part of it. We liked its double meaning.

4. As co-owners of J-Walk, why did you want to create your own brand?
MW: It’s always been a dream to do our own thing. Whenever you design for [others], no matter who it is, you design for them, for their customer, their ideals, their price point. To have the opportunity to do something you want with no restrictions is great.
JS: A big part of our ideology is “crafted without compromise.” And that’s where we can look for the right craftsmen, the right factories.

5. Is it difficult to separate the aesthetics of the different brands you make?
JS: Surprisingly not. We were worried at first and thought, “Is there maybe something that will overlap?” But when there is a danger, as on the color cards, it’s easily rectified.
MW: And we don’t work with any [brands] that are so close in identity either. Some might think they are, but they’re very different.

6. How important is technology — like your Duo Vent system — to men these days?
MW: I wouldn’t say it’s essential to what we’re doing. There are certain areas where it is, but innovation is a big part of our brand and the modern edge we have.
JS: We try to push things just a little bit. With another brand, they might say it’s too expensive. We can do it with our brand because we feel we want to try it.

7. How has the men’s shoe market changed since you launched?
JS: It’s certainly picked up. When we launched in 2009, it wasn’t the best time from a market point of view. However, we, as a brand, were ready then. We’ve gone through ups and downs, even though it’s only been a year. But the market is looking much more positive, especially the men’s market. Buyers are looking for newness. They’re certainly more open to talking and looking. It was a tough year to launch. It can only get better now.

8. Did you think about delaying the launch?
MW: We thought about it. We discussed putting it on hold for a time. But you invest so much in it at the start. And it’s not something you can put in a cupboard and then get out a year or two later. You’d have to start from scratch again. So we went with it. We were ready. The world wasn’t.

9. What was the biggest challenge along the way?
MW: [Retail], because, in Europe, people shied away from new brands, especially at our price level. We were such a big risk for them. People shut down their openness to buying new things. They’d say, “I like your stuff, but there’s no way.” It’s gotten a lot better. The problem with America [now] is the prices. The structure there has gotten cheaper. It’s more difficult to sell in America. So we’ll see.

10. What are your plans for growth?
JS: We’re toying with the idea of a pop-up store, just for ourselves to find out how the market in London is reacting to [our line]. But we would be very careful with that. It needs to be with the right partner. I’d rather have the right selection of retailers and then think about how we’re going to grow it further. … Further away would be denim.
MW: That’s a long way away. But we have goals. We can see the brand going in a clear direction.