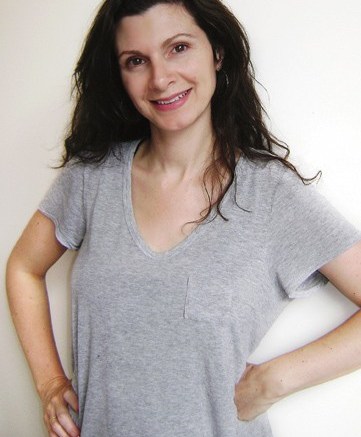 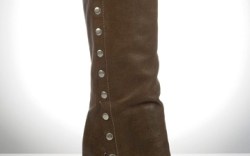 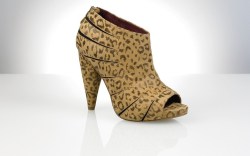 Monica Botkier likes to think she has a good eye.

The former fashion photographer launched her namesake handbag line in 2003, and in the years since, has built a following for her urban-chic aesthetic. The brand’s satchels and clutches, featuring rich leathers, zipper embellishments and subtle snake prints, are sold to a 300-door account list spanning Neiman Marcus to Intermix. Now, the 36-year-old New Yorker is focused on bolstering the footwear collection she launched in 2008.

The offering — which ranges from flat sandals to over-the-knee boots priced between $195 and $600 — makes up about 20 percent of the business. And with the January opening of Botkier’s first boutique, in Manhattan, and a revamp of her website, the firm is on track to boost that number by year’s end.

Though the economic turmoil of 2009 dampened growth, Botkier expects sales at the new shop to hit $1 million in the first year. A steady stream of reorders, she said, could make 2010 the best year yet for footwear.

For now, Botkier said, she’s focused on expanding distribution across the U.S. and fostering a loyal consumer base for the shoes. Eventually, she said, she’d like to expand the offering to include sunglasses and swimwear and position the company to be a global name.

Here, Botkier opens up about building a footwear following, generating online buzz and why she’s tackling it all in-house.

1. Why did you decide to venture into footwear?

MB: It felt like a natural progression. Shoes have always been my second love after handbags, so it made sense. It’s the leather thing. The materials inspire a lot of the designs, with the bags and shoes as the foundation of the look.

2. Is it tough to keep up with brands that roll out several collections a year?

MB: Of course, but right now, we’re approaching it as a labor of love. We’re building a foundation with a small, but loyal, customer base, rather than doing some corporate rollout. That’s just not the way we work. It’s really a grass-roots effort, and it’s very special and manageable. Sooner or later, though, we’ll need a whole separate team to sell it and help out with the design.

3. What have been the challenges starting out?

MB: Getting the word out. I often get e-mails from people asking how they can find the shoes in their area, but [the line isn’t sold] there yet. So getting [the shoes] to consumers is more of the challenge right now. We just have to work on the distribution a bit more.

4. The women’s market is quite saturated. Where does Botkier fit in?

MB: We’re the most expensive in contemporary or the least expensive in designer, and that’s a really hard space to break into. People are starting to understand that we also do shoes and are getting excited about it, but the challenge is in getting retailers to look at our price range.

5. What’s the biggest difference between designing bags and footwear?

MB: The technicalities. You can really do whatever you want with handbags, but with shoes, you have to be a little more [attentive]. The shoe can’t bug your ankle, it has to support your entire body, and the heel can’t be cracking while you walk down the street. Handbags are really one size fits all, and shoes are not.

6. What has surprised you most about branded retail?

MB: Keeping the store fresh all the time is a big job. You set the merchandise up one way, and then two weeks later, you have to do it all over again because people have been walking past every day. We also made the store very sexy, with grays and dark colors, but it creates a [mirror effect], and you can’t really see in from outside. So now we’re lightening it up.

7. Why did you decide to produce footwear in-house?

MB: I keep asking myself that question now that I know what goes into it. I’ve seen smaller brands work with licensees, and the shoes don’t always have the same feeling as the bags. I wanted to have more control and make the shoes I wanted to make. We put a lot of work into developing the collection, and once we’ve set a tone, we could work with a licensee. I’m open to that.

8. How are you using social media to boost the brand with the consumer?

MB: It’s like [we’re] creating a little magazine each week with our blog. We’re interacting and drawing attention to ourselves with the little things we love. It keeps us creative and allows us to stay in touch with the consumer. They want to know what we’re working on. It’s a great tool.

9. Angelina Jolie and Beyoncé are among your celebrity fans. How important are they to building buzz?

MB: People love to see what celebrities are wearing, and it has really become a selling tool for retailers. It’s fun to see them wearing some of the independent footwear brands. If Halle Barry is wearing our boot, it’s a stamp of approval because she could wear any boot she wants.


10. How does being a New Yorker influence the way you approach designing footwear?

MB: Before moving to Brooklyn, N.Y., I lived in Soho for 10 years, and I love the downtown aesthetic. It has a little bit of an edge, and I love the mix of elegance and cool. [But] you also have to walk everywhere here. So I’ve tried to make shoes that are just high enough to make a woman feel sexy, but she can still run around in them.