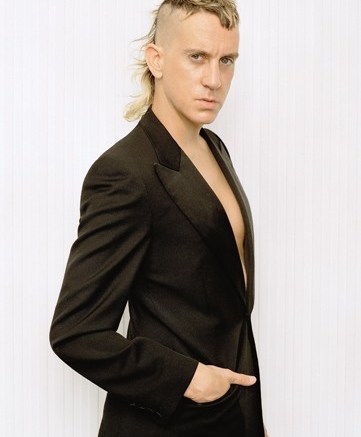 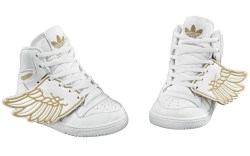 Jeremy Scott is an original, and Adidas knows it.

The Kansas City, Mo.-born, New York-trained designer launched his own fashion line in 1997 and has since been heralded by celebrities such as Madonna, Katy Perry and Rihanna, as well as by fashion insiders. (Karl Lagerfeld reportedly once said Scott is the only person he could see taking over the reins at Chanel.)

Adidas took notice, too, tapping Scott as one of its launch partners for the collaborative Originals by Adidas Originals collection for spring ’09. Since then, Scott has enjoyed an attention-grabbing partnership, thanks to his colorful and playful aesthetic. Leopard-print hoodies (tail and ears included), triple-tongued high-tops, and iridescent and studded takes on classic Adidas silhouettes have made his collaboration one of the brand’s most successful.

This fall, Scott will release his first children’s collection, with a winged tracksuit and infant- and baby-size versions of his most iconic style: the wing shoe (above).

Here, Scott talks to Footwear News about the rigors of footwear design, the importance of celebrity and why designing for kids might be more difficult than creating for the runway.

1. How did you first get involved with Adidas?

JS: About eight years ago, there was a project called !signed [pronounced “I signed”] where designers got to go into the Adidas archive and dream up things. I was asked to do it, and I made a pair of high-top sneakers with a silk jacquard money print that were handmade in Germany — only 100 pairs. They’re very collectible now. They’re on eBay for something like $7,000. Even my mom’s calling me up, “Honey, don’t you have any more pairs of those shoes?” But I just have my one pair.

2. You’ve been in clothing design since 1997. How much experience did you have with footwear before you teamed up with Adidas?

JS: I had never done athletic shoes, but I’d worn tennis shoes and high-tops forever. I love, love, love tennis shoes. The footwear side is still very new to me because it’s industrial design. I was in Portland, Ore., and one of the shoe designers went to my same school [Pratt Institute in Brooklyn, N.Y.] at the same time, but he studied industrial design, so we didn’t know each other. It’s a whole different thing.

3. Was your lack of experience a problem when you started creating shoes?

JS: I [actually] feel more challenged to bring something new when I’m doing the footwear. That keeps me from worrying about rules that keep other people back.

4. What’s the major advantage to working on footwear with a big, technically experienced company?

JS: The wing shoe would not be as successful if it was not made well. When you’re going out on a limb, like I do, you have to back it up — with the construction and everything else. And that’s what’s so wonderful about this opportunity. I love to make athletic shoes right, and I’d only be able to do that with a partner like Adidas.

5. After designing for an athletic brand, are you more interested in the technical side of footwear?

JS: I started an exercise routine — Power Plate. It’s two hours a day, every day. I had to start wearing some performance shoes. It’s quite a new thing for me. But I’m supporting the other side of the brand.

6. Your Adidas collections are significantly less expensive than your couture line. Does that bring in a new customer?

JS: [Yes], people want fun things and exciting things, but they can’t always pay two months’ rent for it. I understand that. I’m totally down with that.

7. Does the A-list attention for both your line and the Adidas Originals collection mean more sales?

JS: I’m totally flattered when people are wearing my clothes. When I love and respect the person, it’s amazing. A lot of my [celebrity clients] have become friends, and that’s been inspiring. Kanye West has said he’s so excited to see my new product, but it’s also wonderful for me because I’m excited to have some new music from him. It’s wonderful to have a connection with creative people. And yes, of course, it’s a wonderful thing for my brands. I’ve been very blessed.

8. What made you want to take the footwear line down to baby sizes?

JS: I know a lot of young parents, and they want cute clothes for their kids. So to do the wing shoes especially, it seemed so logical and right.


9. How was it different designing for kids than for adults?

JS: It’s a challenge to figure out how to still be creative and create a vision within the safety laws that exist [for kids’ clothing and footwear]. With high fashion, there is nothing like safety laws. If it makes it down the runway, that’s all that matters.

10. Be honest: Was this just a ploy for you to give the best baby gifts?

JS: My best friend growing up just had a baby, so she has a pair of my first infant booties!