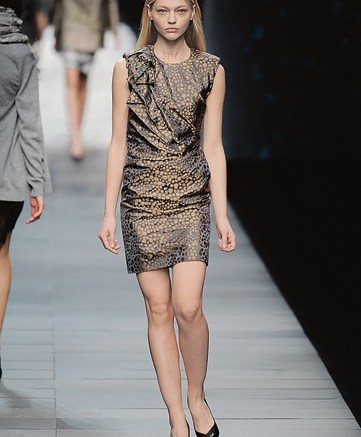 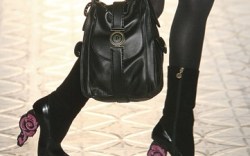 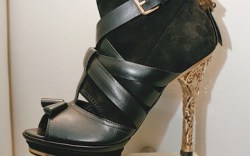 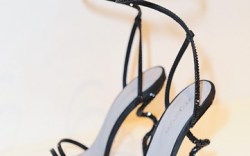 After a big-name shoe designer failed to deliver its wares for the Pringle of Scotland runway, Georgina Goodman stepped in. At the last minute, the designer provided pumps and ankle boots with fall’s must-have skinny heels. It wasn’t Goodman’s only shining moment, as her shoes treaded the boards in New York, at Tommy Hilfiger, and in London she worked with Sienna Miller and her sister on footwear for their Twenty8Twelve show. Added to it was her co-branded Luella by Georgina Goodman collection, as well as shoes for Erdem, both now in their second season. If all that wasn’t enough, in the coming week Goodman’s work will make one more appearance: on the Alexander McQueen runway.

Two designers unveiled metal heels that were anything but heavy. Over at Bally, filigree surfaced on a selection of accessories, including caged-heel ankle boots fashioned in a mix of suede and leather. Creative director Brian Atwood said he revived the intricate art of filigree after tapping Florentine artisans who specialized in the craft. Meanwhile, Gianvito Rossi showed two styles that featured a caged-steel heel treated with black lacquer. “I wanted something special, and an interesting structure that doesn’t destroy a woman’s silhouette,” explained Rossi.

Nicholas Kirkwood’s scrolled heels were the statement pieces of his shoe collection for Pollini. Footwear’s man-of-the-moment said he followed the lead of creative director and fellow Brit Jonathan Saunders, who used the same Baroque-inspired pattern on fabrics in the brand’s ready-to-wear. “I printed the same design onto plastic and created my own scroll heel,” said Kirkwood, who added the show also had many riding-inspired references, including a classic Pollini equestrian boot silhouette that he pulled from the company’s archive.

Max Kibardin is both industrious and relentless. His latest gig has been a quiet overhaul of historic Italian shoe label Lorenzo Banfi. Since being tapped as creative director, not only has the Russian-born designer come up with a fall ’09 collection of 60 men’s shoes and 60 women’s shoes (think wovens, man-style oxfords and beautiful boots paired with bags), but he’s also had a hand in refurbishing Lorenzo Banfi’s cavernous retail space, giving it a distinct feel that isn’t Milanese at all. The 230-sq.-ft. space, which includes a showroom, is in the middle of Milan’s tony Golden Triangle. Meanwhile, Carmelo Pistone, the former Gucci exec who bought Lorenzo Banfi with partners in July, and Italian men’s brand Sutor Mantellassi in 2006, told FN he is planning another shoe acquisition.

The work of Sergio Rossi’s new creative director is already showing. Francesco Russo, who replaced Edmundo Castillo last year, opted for ultra-modern and sculptural shoes with an architectural spiral heel for his debut. Made of stainless steel, the new spiral heel came lacquered or decorated with rhinestones. “It’s about working on the structure, going beyond the boundaries while staying in balance,” said Russo. “It’s about lines, allure, obsessions.”