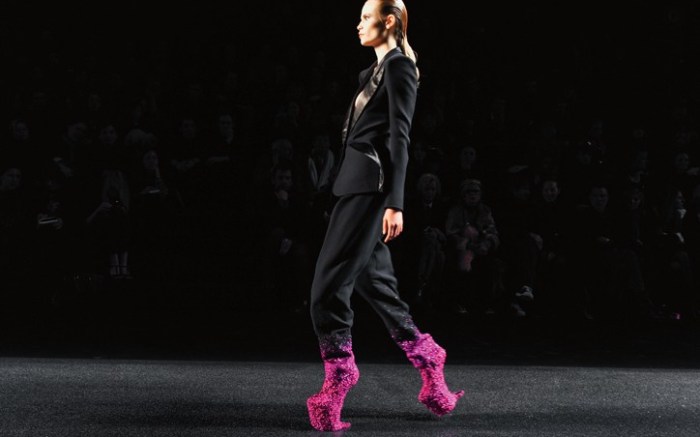 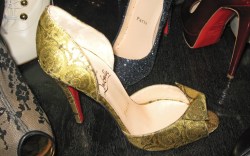 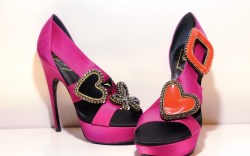 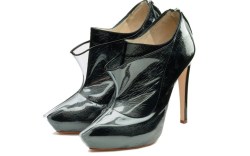 Defying Gravity
Laurence Dacade doesn’t typically divulge much about her collaborations with big-name designers, but she couldn’t stop talking about her role in this season’s statement-making Nina Ricci runway show, which had Paris buzzing. “It was such an experience,” she said about working with Olivier Theyskens on the towering fuchsia, black and gold styles — some nearing 10 inches high. (Amazingly, no runway models toppled over.) “You should put these on when you walk into the boss’ office to ask for a raise. He wouldn’t be able to say no,” said Dacade. “Olivier is so inspiring to work with. He did some sketches and wanted something in the same spirit.” (Reportedly, this was Theyskens’ final runway show.) Dacade, who also designs footwear with Karl Lagerfeld at Chanel, said she worked closely with the factory on the complicated construction. “It’s not a shoe, it’s a modern sculpture.”

Chronicling Christian
Christian Louboutin refuses to slow down. After returning from a U.S. jaunt to Los Angeles for the Oscars, the designer spent part of Paris Fashion Week not in the City of Light but in Damascus, Syria, where he was picking up metallic-embroidered jacquard fabric for his fall ’09 line. Next up for Louboutin: Brazil, where he’ll fête a store opening in São Paolo in April. As he continues his tour, the red-sole king is expected to score some major ink in an upcoming issue of Vanity Fair.

Poker Faces
Judging from the scene at Roger Vivier’s showroom on March 6, you wouldn’t know there’s a recession out there. Designer Bruno Frisoni and Inés de la Fressange, ambassador for the brand, glided from room to room greeting an enthusiastic press pack. The lavish collection took inspiration from a deck of cards. Hearts, spades and clubs embellished with Swarovski crystals were prominent on footwear, gloves and even chunky cuff bracelets. De la Fressange pointed out her favorite shoes, a pair of platform T-straps in leopard-print calf hair. Frisoni also showed off a retooled version of the house’s square-buckle pump, originally worn by Catherine Deneuve in the 1967 film “Belle de Jour.”

Gorgeous Goth
Rupert Sanderson’s definitely “in” with one Parisian giant. After winning British Accessory Designer of the Year in 2008, he came to the attention of Karl Lagerfeld. “He saw a shoe he liked and this catwalk collaboration followed,” said Sanderson, who supplied 51 shoes for Lagerfeld’s show on Sunday. Based on Sanderson’s KitKat, Piccadilly and Conquest shoes, the runway kicks were given a gothic touch, with miniature axes attached to the heels and blood-red piping on the soles. Describing the collaboration as a “stellar fashion moment,” Sanderson said, “It doesn’t get bigger than Lagerfeld.”