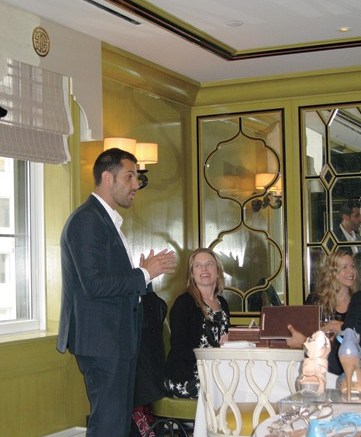 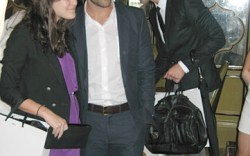 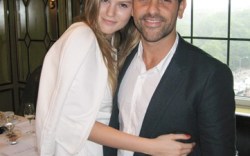 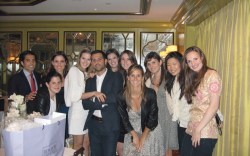 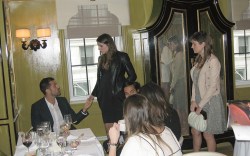 On a rainy June afternoon during FFANY, I head to Bergdorf Goodman’s BG Restaurant, where Alexandre Birman and his New York representative, Network Showroom are hosting a champagne lunch for magazine editors and retail buyers. Everyone present agrees this is certainly the way to do a preview. Amid giant arrangements of deep-violet orchids, Alexandre’s exotic resort collection grabs the spotlight. Woven python in cream tones lends sky-high wedge platforms a soft, fresh edge, while multi-tie straps and raffia detailing add interest to other sandals. Vogue’s Filipa Fino oohs and aahs over the nude- and tan-colored python combos, while Bergdorf’s Roopal Patel chooses the woven python as her top pick and Elle’s Kate Davidson Hudson arrives just before lunch is served.

Max Bonbrest, who works as the company’s celebrity liaison at Ally B. Entertainment on the West Coast, explains that the entire collection is handmade. With 39 years of shoemaking in his family background, Alexandre is certainly in his element. His father founded the Arezzo Group, which is made up of Arezzo, a lower-priced women’s brand; Schutz, a contemporary collection; and the high-end Alexandre Birman line, carried in the U.S. by Bergdorf, Neiman Marcus, Intermix and Chuckies .

The designer is in New York briefly before jetting to Miami for an appearance at Neiman Marcus in Boca Raton, Fla. The retailer has invited 12 of Alexandre’s best clients to come for a special event, where the designer will sign shoes and lookbooks for them. Milena Pinteado of Network Showroom, who represents the brand in the States, says, “They love Alexandre at Neiman Marcus. They do all the windows with Alexandre Birman shoes, and the footwear manager there is the best in the company.”

Alexandre started designing the Schutz brand 15 years ago in Brazil, but it has only just hit the U.S. The Arezzo, Schutz and Alexandre Birman lines are all made in Campo Bom, which is close to Porto Alegre in southern Brazil. Sarah Scheffel, head designer of Schutz under Alexandre, describes the line as a younger collection that still features sophisticated, fun designs. It is designed to fall within the low contemporary price point (from $95 to $275 retail). “We work very closely with the tannery and use materials such as stamped snakeskin for Schutz, whereas Alexandre Birman is made with real snakeskin,” she says.

When the Harper’s Bazaar accessories team arrives, including summer intern Talulah Willis, lunch is served. Alexandre toasts the crowd, and everyone digs in. Alexandre calls himself and his family “shoe people,” stressing, “This business was not started as a vehicle to make money. We’re shoe people. This has been a fairytale story for us.” Ever since his father, at 18, borrowed money from his grandfather to set up a shoe factory in his garage, business has been on the rise, although Alexandre is careful to say things weren’t always easy. “I was born and raised in a shoe factory — and that’s not marketing, that’s the true story of my life. The first years were very rough for my father, and I was born during that time,” he says.

It was the switch from men’s shoes to women’s espadrilles in the 1970s that helped the company turn its first profit. Gradually, from 1991 to 1999, the family business began to transform from a manufacturer into a retailer, and Arezzo now boasts 240 stores and 3.2 million pairs of shoes sold. Alexandre, who started working in the factory at 12, learned shoemaking before studying in Boston and Florence, Italy, and eventually returning home to carry on the legacy.

“First I made mountain-biker styles and Timberland-like styles for Schutz. Our motto was ‘Peace of mind with comfortable shoes.’ Then, after a vacation in California, I realized that, like my dad, I wanted to make ladies shoes. Since then, Schutz has turned into a fashion phenomenon in Brazil with more than 1 million pairs sold,” he says over our lunch of lobster salad.

Alexandre, whose designer collection retails from $285 to $750, confirms he always planned to start a high-end line, since he knew he could create luxurious looks that would be cheap compared with Italian-made shoes. Of his continuing devotion to luxury and skins, he says, “Python adds value to shoes. We launched [the Alexandre Birman] line in the U.S. first, and now two years later, we are bringing it to Brazil. We created the image first, and now it comes off as an imported brand, which adds value in Brazil.”

The designer sells 50,000 pairs of Alexandre Birman a year worldwide and is ready for more international expansion. “This is the first time we’re doing Micam and Premiere Classe. Trade shows are very different in Brazil because we sell much closer to delivery. Retailers go there to buy, not just to see shoes and ask for samples.” Arezzo and Schutz, for instance, both deliver collections every 45 days to keep things fresh in the age of fast fashion.

After a sorbet trio with iced shoe cookies is served, the editors rush back to work, while Alexandre and his team gather for an impromptu meeting. I visit with the designer’s Brazilian fiancée, Johanna Stein, while the group conducts business in Portuguese. Alexandre summarizes: “We are talking fit, quality, sales. You have to deliver on time with quality. Without quality, you can open the door once with a smile, but they won’t come back.” As things are wrapping up, he shares the final bit of excitement for the brand, “For the cherry on top, Kate Hudson came to the showroom and selected 28 pairs of Alexandre Birman and Schutz shoes.” Perhaps we’ll be seeing more of her as the new face of Alexandre Birman.