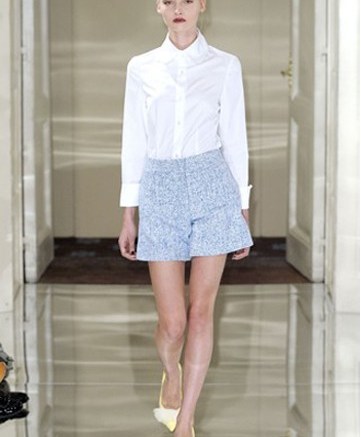 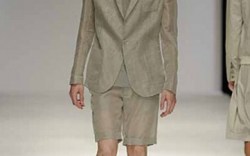 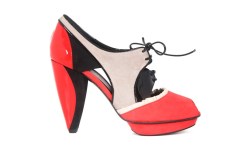 Custom Creation
One highly individualistic shoe surfaced on the runway at Veryta, a new Italian luxury fashion brand. Veryta’s creative director, Tanya Ling, explained that a “chick coming out of the egg” had inspired the unnamed pumps that she bought and then customized for her models. Veryta is part of the philanthropic Veryta Foundation, which was co-founded by Yves Saint Laurent Creative Director Stefano Pilati. The foundation will donate part of the profits from the line to poverty projects in India.

Teaming Up
Savile Row-trained designer Jsen Wintle chose a suede wingtip and a classic driving moc from Harrys of London for his runway show. “He has the right tailored, smart, contemporary look for us,” said Harrys’ creative director, Kevin Martel. Next up for Harrys: its first retail franchise opening in December, a 253 sq-ft store in the 360 Mall in Kuwait City.

Fresh Names
The design duo behind Kron by Kronkron, a quirky brand from Reykjavik, Iceland, showed their Spanish-made women’s label for the first time in London. … Elisalex Grunfeld de Castro, who graduated from Cordwainers in 2007, showed her Nina Dolcetti collection of women’s shoes, crafted in a factory in London from reclaimed leather and suede … Up-and-comers Michael Lewis, Atalanta Weller, Cleo B and Beyond Skin debuted their lines during the week.

Beatrix Buzz
To celebrate London Fashion Week, Beatrix Ong (who will also show in Paris next week) unveiled a display in Jaegar’s store windows of Jaegar in Knightsbridge, where the designer also has a shop-in-shop. Ong also debuted her spring ’10 collection at Somerset House. Finally, five brogues and oxfords from Ong’s men’s collection were on display at Marcus Constable’s women’s wear show.

Flight of Fancy
Vivienne Westwood has once again teamed with footwear brand Melissa, this time recreating the designer’s classic Rocking Horse shoe — in plastic. Originally introduced in 1988, the shoe’s new version has detachable wings and made its debut on the runway this week. The Wing Rocking Horse shoe (retailing for 120 pounds) will be available in mid-November at all Vivienne Westwood stores, as well as Browns Focus, Selfridges, Harvey Nichols, and Liberty in London, with more accounts to come.