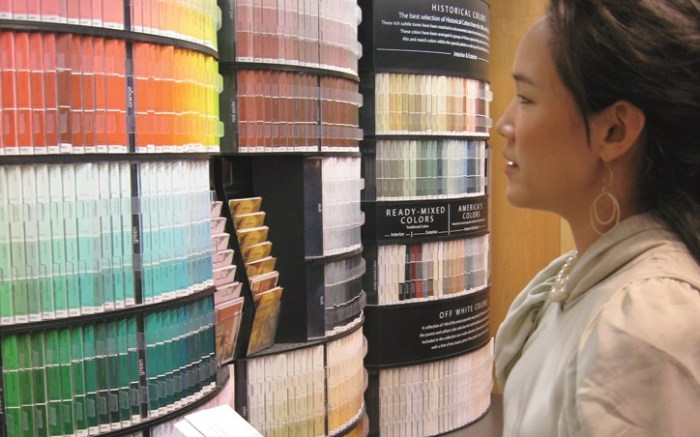 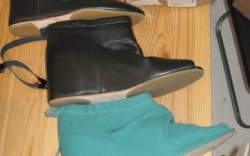 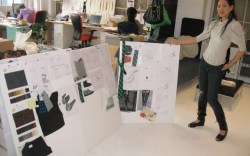 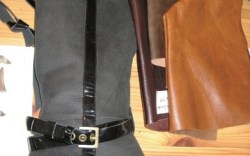 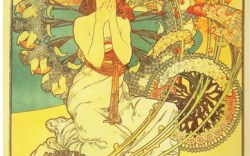 I stroll into the Benjamin Moore paint store on Spring and Sixth Avenue to find designer Cece Chin perusing the vast array of color samples. I was certainly curious about Cece’s invitation to meet at such an odd locale. I did, however, stress that my intention was to capture a real “day in the life” of this designer. Soon after meeting Cece, the creator of the 80%20 brand, I realized she couldn’t get any more real. Looking through the color samples to pick color ways for the spring ’10 collection and for Cece’s apartment, we discuss the evocative nature of color names. Cece considers “Raspberry Mousse” and “Ravishing Red,” and we debate the virtues of “Honolulu Blue” versus “Polar Sky.”

Cece chooses a pale blue for her bedroom, a berry hue for the hallway and decides to devote the vintage cabinet in her kitchen to a shoe showcase, which will be painted red with a contrasting yellow or gold inside. We glimpse a color sample called “Cherry Blossom” that spurs Cece to talk about her recent trip to Japan. “In Japan, there are many festivals that coincide with the blooming of the cherry blossoms. It’s evocative of a real change in season and the whole city is in full bloom.”

For spring, Cece is imagining a cherry blossom palette and a return to the colorful graphics that are part of her young brand’s heritage. “I’m also looking forward to holiday, since there is the opportunity to add embellishment and dressier styles,” she says. I ask whether jewelry would be a natural step to expand the 80%20 line, and Cece responds that she would prefer to start with hosiery. “I want to do colorful hosiery — it allows you to evolve your look and reinvent your wardrobe in a simpler way.”

We walk from the paint shop to Snack, a tiny Greek restaurant on Thompson Street, for a quick lunch. Besides small leather goods, Cece mentions she’d also like to experiment with children’s shoes and stuffed animals. Cece says on her family vacation last week, she was reminded by her three older sisters of her enduring love for stuffed toys. “I used to arrange them in a very particular order, which my sisters still tease me about.” When probed about what size she’s considering, she answers, “Huggable!”  Immediately switching back to a more serious note, the designer adds, “I do feel confident that I chose a vibrant industry — people are still buying shoes, and women have a different attachment to shoes than say a sweater, or any other item.”

After lunch, we wander into Ina, the well-known designer consignment shop, to check out the shoes. On display there are a full selection, from ancient-looking Roger Vivier pumps to last season’s Balenciaga boots with a vertiginous hidden wedge. Cece compliments the construction, regardless of the similarity to the covered wedge that’s become her signature. “Some ideas are just out there in the universe for whoever gets to them first. And I’m going to have an abundance of ideas over time, so I can’t get upset over it. At least it shows something’s working. But you do have to stay fresh.”

The designer launched 80%20 four years ago, aiming to create shoes that would make up 20 percent of your wardrobe, but that you would wear 80 percent of the time. Desiring to make her product widely accessible, Cece has kept the retail price mostly under $200 for her made-in-China collection. Of her brand’s DNA, Cece says, “Our customer is a Williamsburg, Brooklyn, girl who is on her second or third job and is really beginning to drive creative ideas. She’s urban, culturally savvy, and she has a reason to wear stilettos, but she leads an on-the-go lifestyle where she may have appointments all day and still go out for cocktails later. This type of person has limited options for footwear, but the covered wedge allows you to look great and still be comfortable.”

Currently, Cece is working on more defined branding for the company, including a concept store that will act as the brand’s retail flagship in Japan, where she has already found success. “Americans love it in pink, but buy it in black — the Japanese are more visually driven people. Their eye for detail is more advanced, and it’s a receptive market for more experimental styles. If you can build an environment around your product, they feel it as an experience and you can build bigger business around that,” she says. The designer also recently contracted with a new distributor in Europe to expand her business there, and although the U.S. remains 80%20’s strongest market, Cece says the perfect way to develop it further would be a Target collaboration. “I don’t know whether that would ever come to fruition, but I think my shoes would be perfect,” she says.

Our last stop at Cece’s studio on West 39th Street proves the designer does have a whole new look planned for next spring.  “I’ve found inspiration from the Art Nouveau graphic designs of Czech artist Alphonse Mucha,” Cece says. Kimono prints and jeweled heels are also to come.