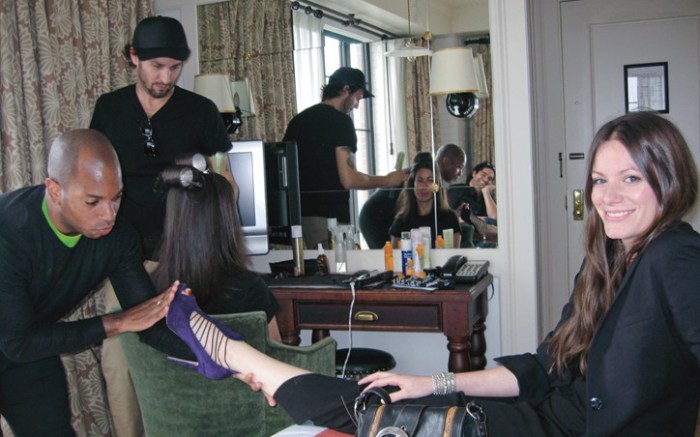 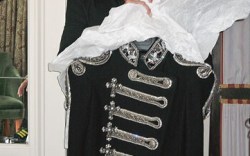 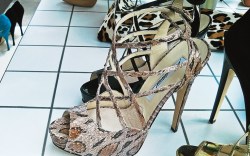 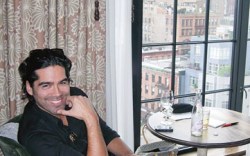 On Monday, June 15, the afternoon of the CFDA Awards, I meet a beaming Brian Atwood in his suite at the Bowery Hotel. He has flown in his sister, Cameron Laidlaw, from Breckenridge, Colo., to be his date for the big night. Brian, who grabbed Swarovski’s Perry Ellis Award for Accessory Design in 2003, says it’s hard to believe it’s been six years since he won. “My mother and father came, and then my little sister met up with us for the after party. It must be time for another one,” the designer jokes, before adding, “I’m kidding, but it is an honor for any designer who wins a CFDA Award.”

Brian, the eldest of six siblings (three girls, three boys) and a self-proclaimed family man, says his youngest brother was in town to help with his sample sale on June 10. “I’m the oldest,” he says with a smirk. “I have to set the example.” While in the States, Brian also has scheduled a quick family visit to Chicago, before heading back to Milan on Wednesday. And then there is his longtime friend, Julius Poole, who Brian jokingly refers to as the seventh Atwood child. Julius and Brian met at the Fashion Institute of Technology 21 years ago and have been close friends ever since.

Julius, who used to design shoes, says Brian’s ability to execute is what most impresses him. “Some people showboat, but he can execute,” Julius remarks. “Brian could take a bed sheet and make a dress in five minutes. He just puts on music and he’s in the zone — it’s amazing.” So far, their day has been composed of picking up Cameron, an appointment with milliner Loretta Corsetti at a fabric store and a trip to FedEx to ship vintage acquisitions from New York Vintage and Frock back to Milan. We chat briefly about Brian’s resort ’09 collection, which he says has a slightly harder edge, with studs on ankle boots and pumps, lots of viper snakeskin and a plexi/suede combination set to wow.

Our conversation turns to the evening ahead, and Brian talks about what he’s expecting. “I’m just excited to see what happens. I’m looking forward to seeing Marc Jacobs and my other close friends.” Even when pushed, he won’t tell me who he’s rooting for to win the awards. Julius, on the other hand, confesses he wants Italo Zucchelli to take home the statuette for the menswear category. On the way to the awards, Brian, Cameron and Julius will pick up model/actress Molly Simms, who will be wearing a Dolce & Gabbana dress and Bally clutch and Brian Atwood pumps.

Throughout the afternoon, Brian has been exchanging text messages with Rachel Zoe, who is staying downstairs. The designer’s press manager from Bismarck Philips, Nicole McBride, mentions that Rachel has been Twittering about Brian recently, which launches a conversation on the addictive power of social media. I ask what Brian’s current Facebook status reads. Thanks to Tweet Deck — an application he downloaded to his phone to update Facebook and Twitter simultaneously — both read “‘CFDA — gonna be a glamorous night,’ or something like that,” he responds laughing.

Rachel’s latest text asks Brian’s opinion on whether she should change into a black dress (instead of her peach-hued Louis Vuitton gown) due to the imminent rain. Brian’s response? “Either way, I approve.” As for the designer, his sartorial choices will include a silk-and-linen ice-blue Tom Ford suit. For his sister, he purchased Balmain’s box-shouldered military jacket with silver chains and buttons in Paris, but left the bottom half of the look to be completed over the weekend. “We thought we’d find pants at Balenciaga or Azzedine Alaïa, but it was Kirna Zabête that had them,” Brian confessed. White jeans with quilted knees and ankle zips, also by Balmain, were the winning ticket, paired with, of course, Brian Atwood black patent strappy stilettos. After putting together the ensemble for his date, Brian confesses he had to go back for a tie to “step it up” to her level.

The designer also brought in hair and makeup stylists to attend to Cameron. And he has a specific look in mind. “Hair straight and shiny with a little bit of bedhead in back, and very natural makeup with a smokey Carine Roitfeld eye — very French Vogue.” I mention my admiration for Carine, and Nicole chips in, “And Julia loves Brian, too!” Julia Restoin-Roitfeld has just sent Brian a text that she is attempting to squeeze into a Balmain microdress. At 5 p.m., Brian, still looking relaxed, finally gets up and declares the time has come. “I better go, since I don’t have a team to help me get ready,” he quips.

The CFDA gala will be followed by a party hosted by Calvin Klein on The High Line in Manhattan’s Chelsea area. “We’re planning to meet up with our friends at the CFDA and then head to the Calvin party,” Brian says. “We have a 7 a.m. flight to Chicago, so our suitcases are packed and in the car. That’s all that’s on the books, but who knows? You’ve got to be prepared!”