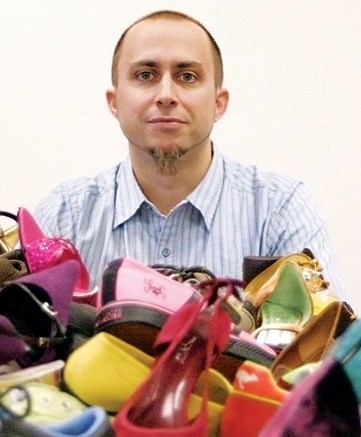 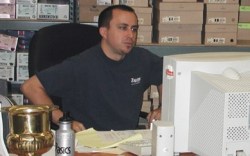 It all started with a failed trip to the mall.

In 1998, film-school grad Nick Swinmurn was scouring the Bay Area for a pair of Airwalks, but couldn’t seem to find the right size and style. Swinmurn, who was working at the Internet consumer site Autoweb.com at the time, used the model behind that site for selling shoes online. This idea would eventually become Zappos.com.

Swinmurn said it was a passion for enterprise — not necessarily footwear — that got things started. “I was always trying to start little businesses, so I did a bunch of research and ended up at The WSA Show in 1999.”

Armed with some homemade fliers for Zappos predecessor ShoeSite.com, Swinmurn was denied access to most booths, but executives at Eastland provided some crucial words of encouragement. “They told me, ‘We’re not going to work with you right now, but someone’s eventually got to do this, so you should keep pursuing it.’ I got enough of those kinds of comments that I thought, ‘OK.’”

The young entrepreneur began raising $150,000 in start-up capital from family and friends, but soon realized he would need a major investor. A call to Tony Hsieh, then a venture capitalist, began what would become a very fruitful partnership.

FN: How did you meet Tony Hsieh?
NS: I had already met with five or six venture capitalists [when] my attorney told me about these guys at Venture Frogs who were looking to invest in anything at the time. Tony had sold his company, LinkExchange and started a fund. It was a small fund with no track record going up against established venture capital firms for the biggest deals. But they had ambitious plans. Tony, Alfred Lin [now chairman, CFO and COO] and Millie Chou [now in-house counsel] rented two floors of a building in San Francisco, and they wanted to have this big incubator with about 30 companies in it. But that didn’t pan out because the economy started to go south. So we were pretty much the only company that ever went into the incubator.

FN: How did you convince them to invest in you?
NS: It was the fact that 5 percent of a $40 billion shoe business was already being done through mail order. That was my big statistic. People were already buying shoes without trying them on. So they invested $500,000 — which at the time felt like I had just raised $100 million. The company was a little more stable at that point, so Fred Mossler agreed to leave Nordstrom and come on board as our buyer.

FN: How involved was Venture Frogs in business decisions?
NS: Initially, we were just given money, and if we were going to spend more than $50,000 on something, we had to let them know. In January 2000, they put more money in, and we agreed to move into their office space. Tony was spending all day with us, and I think he realized it was the most fun company to work on and one of the only companies to work on in the office, so he really got behind it. I don’t think Alfred was ever really that high on Zappos in the beginning.  But in 2004 and 2005, he started to show interest. He realized that it was getting pretty big and there was a need for a CFO.

FN: What was the biggest challenge?
NS: We couldn’t get brands to work with us. The original model was drop ship [where manufacturers send ordered product directly to customers], and most manufacturers weren’t willing to do that. And many of the ones that were didn’t have very good data feeds — their inventories and warehouses weren’t accurate. So we switched to an inventory model, and even then, most brands wouldn’t sell to us because they were worried we’d cannibalize their brick-and-mortar sales. A big turning point for us was when we got Dr. Martens. That was the first brand we got that seemed to impress other brands, and there was a lot of demand online for their shoes. People began to see that being on Zappos didn’t kill their brand. But it still took nine years to get Nike to agree to come on the site. And there are still some brands that aren’t on there.

FN: What else did you do to drum up business?
NS: We spent a bunch of money sponsoring the San Francisco Giants and the other local sports teams just so we could call brands and say, “In the third inning of the Giants game, you’ll see a big Zappos ad behind homeplate.” A lot of brands seemed to think that the more money we were spending, the better our chances for success. But it was actually the opposite. If we had kept doing things like that, we would have gone out of business.

FN: How did the growth of e-commerce affect Zappos in the early days?
NS: When Nordstromshoes.com launched in October 1999, I got all these phone calls from people saying, “It was fun while it lasted. At least you guys tried.” But it was actually one of the best things that ever happened to us. When Nordstrom launched it made our business look better because it gave the investors [faith in us].

FN: How did your role at the company change over the years?
NS: I was the CEO until 2001, and Tony and I were co-CEOs from 2001 to 2003. Then one day we had a meeting in a restaurant with some investment bankers. They would address me with a financial question. I’d defer to Tony, and he would answer. We did that the whole lunch, and as we were walking back to the office, I told him, “I don’t need to be co-CEO. We’ve gotten to a point now where the CEO’s responsibilities are mostly going to be financial, and I don’t need the title for my ego.” By the time we got back to the office, I told everyone, “Tony’s the CEO now. I’ll be chairman.” Our responsibilities didn’t really change, it was just a title thing.

FN: Why did you leave in 2006?
NS: I started thinking it was time to do something else around the end of 2004. [At that point], it had become about processes and lawyers and getting a bunch of people to sign off before you could do anything. I prefer startups and being able to jump in and change things. Then we went to Las Vegas, and it was like starting again, and I got reinvigorated. But when the rest of the company moved out there, it was back to being a big company again — meetings about meetings. Finally, by the beginning of 2006, I thought, “The company is running itself. I don’t need to be here.” So I left.

FN: Did your departure shock the team at Zappos?
NS: I think they probably knew I wasn’t that interested anymore, but they might have been surprised that I was actually leaving. They were probably more worried that people would think that something was wrong. And there wasn’t. I was just over it. It had been a long time.

FN: Do you still have a stake in the company?
NS: I’m still a shareholder, and I still attend the board meetings. I sold shares privately at different points over the years, but I still retain a fair percentage of what I started with. … When we started, I owned almost all of it, but I kept getting diluted. We all trusted Tony, so he would negotiate with himself. He would say, “OK, we need another $1 million. I will put it in, and this is what part of the company I am taking.” Also, in 2005, Sequoia Capital invested about $35 million.

FN: What do you think of Tony’s plan to expand into other markets such as apparel and electronics?
NS: There’s always a risk in trying to expand because then what does the brand stand for? For so long, the brand stood for shoes and handbags. Is it better to make sure Zappos always dominates that market, or is it better to offer everything? In Tony’s vision, it’s not even just about selling stuff. He has a vision in his head, and I don’t know what it is. I know that it’s about culture, but culture’s hard to define.

FN: What have you been doing since you left?
NS: Right after I left, I started a custom apparel line called Stagr, but it was such a cumbersome process on the back end that after a year I shut it down. I just started a new clothing brand, Dethrone, in March. I’m also working on another site called Stylejuku.com, where you can take items from different retailers — Zappos included — and create outfits. We want to turn it into the kind of place where people can go for [personalized] fashion advice.

FN: What advice would you give to young entrepreneurs?
NS: Don’t let your ego get in the way if something is working. Do whatever you need to do to keep moving the company forward and don’t worry about who gets credit or who owns what. That’s one of the reasons everything worked for us. No one at Zappos had a huge ego.