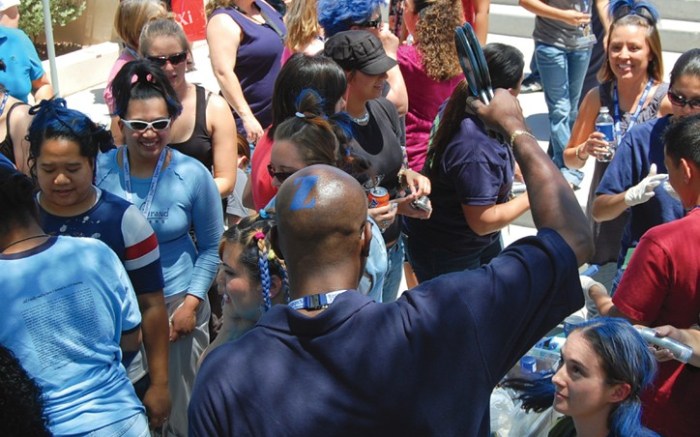 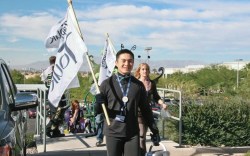 That is just one of the questions Zappos.com asks prospective employees during its “culture interview,” a key part of the company’s hiring process. Other quirky queries include “What theme song defines you?” and “Which superhero do you most relate to?” If candidates get too flustered, recruiters move on.

The interview is designed to give would-be staffers a small taste of what’s to come. During its 10 years in business, Zappos has cultivated an out-of-the-box culture that permeates the entire company, top to bottom.

“Our culture is the first thing we think about,” said Chairman, COO and CFO Alfred Lin. “It’s the only long-term strategic advantage we have.”

The Zappos lifestyle is on full display at the company’s headquarters in Henderson, Nev.

While the exterior is nondescript — like any typical office park — once inside, visitors find themselves in a reception area that resembles an arcade, complete with a popcorn popper and a full-size Dance Dance Revolution SuperNova game. There are no corner offices, here. CEO Tony Hsieh and Lin sit in “Monkey Row,” where fake trees and leaves hang down over their desks.

Nearby, employees wearing crowns and sitting on thrones meet with the Zappos life coach, “Dr. Vik.” And there’s a nap room down the hall for staffers who need a break during a hectic day. Other unique benefits include free lunches, a concierge service, on-site dry cleaning and in-house massages.

The office perks are just the beginning. Zappos encourages its workers to participate in fun and sometimes downright wacky activities while on the job.

In April, for example, staffers teamed up to celebrate Easter with the first “Zappos Peeps Challenge.” Groups crafted dioramas made out of the popular Easter candy, with themes ranging from “Brady Bunch Peeps” to “Silence of the Peeps” to the winning entry, “Peeps of Love.” This month, the company will hold its annual Bald, Blue & Tattooed event, where dozens line up to shave their heads, die their hair blue or get temporary tattoos.

And Zappos has become known for its impromptu parades, during which employees sing and dance through the office to celebrate a holiday or special event.

The unconventional team building continues outside the office. Managers are expected to spend more than 10 percent of their time with employees off-site, at hikes or happy hours or other non-business-related events.

Often, so-called Zapponians meet up after hours on their own. It was during one of these informal gatherings that the idea for the “Zappos Culture Book” was born. Over drinks, Hsieh and some of his colleagues decided it would be valuable to put together quotes from employees and vendor partners about what the Zappos culture means to them.

The 2008 edition of the book, which totaled nearly 500 pages, is a veritable love letter to the company. Among the hundreds of quotes are “I wake up every morning and think, ‘Today I am the luckiest guy in the world,’” from Jerry T., a help-desk employee. (All contributors are identified by their first names and last initial.) And Neil G., a customer-service employee, wrote, “When thinking about Zappos culture, one word comes to mind: family.”

The company’s culture-first mantra helped it land on Fortune’s annual “100 Best Companies to Work For” list, published in February. Zappos was the highest-ranking newcomer on the list, at No. 23, and was even mentioned on the cover.

But as the company grows, can it keep the tight-knit, family vibe intact?

Executives say yes, but they acknowledge it will be a challenge.

“You have to get more creative as the company grows and the economy changes,” said Jamie Naughton, who heads up the culture extras at Zappos. “Some programs that worked really well when we were a 200-person company don’t scale well now.”

“I would imagine my kind of work would be cut at most companies [in this economy],” Naughton said. “But we haven’t taken anything away. Maybe it’s been scaled back to be more cost-efficient, but we all believe in what we’re doing.”

While Zappos works hard to keep staffers satisfied once they’re in the door, getting a job at the company can be a challenge.

“We definitely have turned away a lot of people who might be very skilled technically, but who we sense aren’t going to contribute to our culture,” said recruiting manager Christa Foley.

After a minimum of two interviews (and as many as 10), selected applicants begin an intensive four-week training program that all employees, no matter their level, have to go through.

To make sure staffers are serious about the company — and its culture — Zappos offers a lucrative quit-now “bonus” two weeks into the training process. The firm has gotten a huge amount of press for the unusual initiative, which gives employees $2,000 to hit the road.

“[After CEO Tony Hsieh and I started the program], we got a lot of flack from human resources and legal for paying employees who weren’t committed to the company,” recalled Alfred Lin, chairman, COO and CFO. “But if you’re not committed, we’d rather you leave sooner rather than later. We know our recruiting team is good, but they’re not perfect.”

To date, less than 1 percent of new employees have taken the payout, and Lin said he thinks the offer might be too low. “It’s really a small amount to pay.”